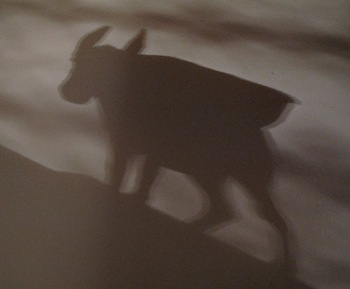 Well, not really an art photo, but it does look atmospheric. It’s a photo of a shadow cast by the following novelty item… 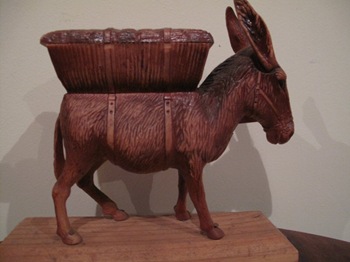 What is it, other than a donkey with a basket on its back?

B worked for many years, before his retirement, at the ABC as a props buyer for television. His assignments were often quite bizarre and he was required to source many a strange item.

The donkey was one of them, and was used on the Australian comedy show Australia You’re Standing In It which starred such alumni of the 1980s Australian comedy scene as Rod Quantock, Steve Blackburn, Mary Kenneally, Geoff Brooks, Sue Ingleton, Evelyn Krape, Peter Browne and Tim Robertson.

The donkey was used in one of Ron Quantock’s sketches, and it is in fact a cigarette dispensing machine. You put your cigarettes in the basket, pull the donkey’s ears, and voila, it excretes a cigarette. 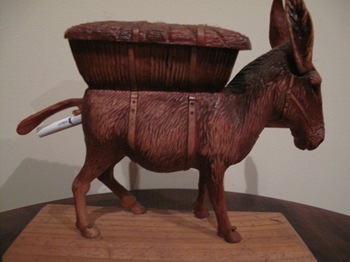 Pretty crass and vulgar, but funny all the same.

B, having a taste for the crass and vulgar, brought it home after the show finished. It’s been sitting on a shelf above the kitchen bench for years. This evening I noted the rather fetching shadow it cast on the abutting wall, and felt inspired to photograph it and thus blog it.

You don’t see this type of novelty item much these days. Who knows it could be collectable.