Another superb lunchtime concert at Basement Discs today was a delightful performance by Lisa Miller, in company with Shane O’Mara, singing songs from her latest CD Car Tape 2.

Car Tape 2 is a collection of cover songs by various artists - a companion album to her first Car Tape CD of 2002, Lisa makes them her own, by her tasteful arrangements and interpretations. I was delighted that she performed the Ryan Adams song She Wants To Play Hearts first up.

Also on the album are songs by Tim Harding, Neil Young, Bert Jansch and Francoise Hardy among others.

Lisa Miller is always a pleasure to see, and you could listen to her appealing voice all day without tiring of it. Ace guitarist Shane O’Mara naturally played very tasteful guitar accompaniment.

In other music news, Leonard Cohen is to return in November. Having just looked at Frontier Touring to check the price of tickets, I think I’ll give him a miss. Platinum tickets (best seats) are $284.00! 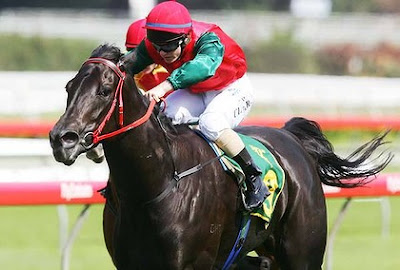 Hot Danish
I normally wouldn’t bother writing about the Brisbane winter racing carnival, but the Group One Doomben 10,000, a weight for age competition over 1350 metres, has such an interesting field, that I feel like speculating on the outcome. The now retired Apache Cat won this race twice - in 2008 and 2009. So who will win it this year?

It is likely to start with a full field and it is packed with class performers. The big question is, can a mare or filly win? Very few have in the past, the last being Flitter in 1994.

Sure to attract keen interest is Whobegotyou, returning from a long break. He hasn’t raced since failing in the Cox Plate last spring, so he will be fresh. He has drawn a wide barrier, though his trainer Kavanagh claims he isn’t worried.

The top picks are mares Ortensia and Hot Danish along with the super consistent filly, Melito who will surely be in the finish. Top fancies in the male contingent are Mic Mac, Albert The Fat the surprise winner of the BTC Cup, Black Piranha who ran second in this race last year, and Carrara who performed so well in the autumn against Denman and won the Doomben Slipper on this day last year.

I’ll be barracking for the girls and hoping Hot Danish, Ortensia or Melito win, may be even trifecta, though that’s an enormous long shot.

And I was pleased to see Metal Bender back to his best in the Queensland carnival, taking out the Hollindale Stakes/Doomben Cup double. He will now be aimed for the Cox Plate in spring. Graceful Anna after winning the Silk Stocking a few weeks ago, only managed third place last week, so will not be competing in the Stradbroke, but staying in her own age group for now. Despite that, I'll continue to follow her progress
Posted by Anne S at 3:44 pm No comments:

What I’ve Been Reading

It seems ages since I last wrote about books, so here’s a short rundown on the books that have accompanied me on the tram to work over the past month or so.

Despite not mentioning books on Cat Politics, I have been putting up posts fairly regularly on my Eye Candy for Bibliophiles blog, and have recently displayed my old collection of Picador books. This in turn inspired me to reread several of them myself, so that’s what I’ve been perusing recently.

The narrator himself is something of a cad and the final denouement really shows just how nasty he is.

From Czechoslovakia I moved on to Maxine Hong Kingston’s memoirs of growing up in a Chinese American family. The Warrior Woman covers her female progenitors, and China Men the men of the family. These two books are a mix of imaginative fiction and fact. They were highly lauded by the critics when they were first published back in the 1970s, and still pack a punch in terms of entertaining and interesting reading.

Doris Lessing’s dystopian novel The Memoirs of a Survivor next attracted my interest.

The narrator remains unnamed throughout and records the unfolding barbarism with detachment while sheltering Emily a young girl who mysteriously arrives from beyond the wall. Emily is accompanied by Hugo, an endearing creature - half dog, half cat, certainly more lovable than the precocious Emily.

It is set in Osaka and Tokyo during the early years of the Second World War and provides a fascinating behind the scenes look at Japanese society of the 1930s and early 1940s.

I received David Mitchell’s new novel, The Thousand Autumns of Jacob de Zoet last week from Amazon, so I couldn’t resist starting it on the weekend. So far I am finding it immensely enjoyable, delighting in Mitchell’s clever story telling and sparkling prose. 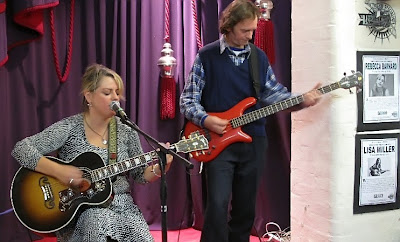 On this mild to cool day in Melbourne, Basement Discs hosted a sunny in store performance by Rebecca Barnard, to promote her new CD Everlasting.

Rebecca is well known as the lead singer of Rebecca’s Empire, a hallowed Melbourne rock band of the 1990s. She has been going it solo for some years now and Everlasting sounds like a winner.

She gave us a taste of it today, and it sounded really good, despite there being only Rebecca singing and playing guitar with Michael den Elzer contributing bass notes.

Rebecca has a delightful, confident and witty stage presence and has one of those great singing voices - a little sultry, a little bitter sweet.

Check her out on My Space and hear for yourself.

Next Friday Lisa Miller, her with the blue eyed and broken hearted voice, will be performing tracks from her new CD Car Tape 2. I sincerely hope she sings the Ryan Adams song She Wants To Play Hearts which I notice is on the record. She Wants To Play Hearts is, in my opinion, one of Ryan’s best songs, the imagery in the words being so utterly perfect and complete. 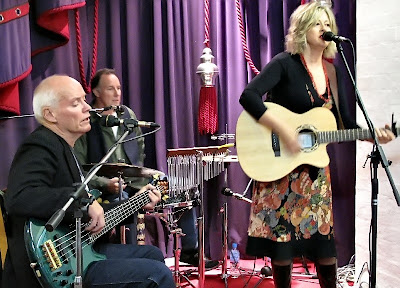 I’m a bit late getting round to writing about Suzie’s in store, but work commitments etc have impeded on the time I could have had to write.

Last Friday’s lunchtime in store performance which starred Suzie Dickinson and band at Basement Discs, was certainly up to standard and a very enjoyable half hour it was too.

Suzie’s CD 19 Steps, as I’ve said before. is a beauty, full of alt country goodness and then some. B, who is hard to please, reckons this is the best CD he’s heard this year. I have to agree. It really gets under your skin and into your head, so that you find yourself humming bits of it inadvertently.

Suzie was accompanied by only part of her band with Dave Flett on “lead” bass and Ron Mahony providing tympanic effects. Despite being in the local music scene for many years, 19 Steps is her first released album. Ross Hannaford (Daddy Cool) provides very tasteful guitar throughout.

Check out Suzie’s My Space for a sample of the songs. You can buy a copy of the CD directly from there via PayPal or if you want to support indie record stores, there are several listed to choose from, including of course Basement Discs.

The Music Goes On – Liz Stringer at Basement Discs 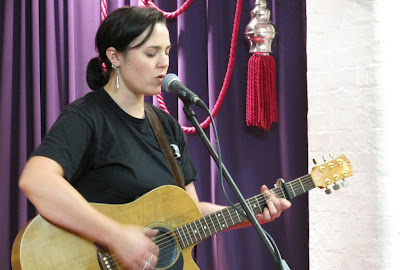 Of all the talented singer songwriters in the Melbourne roots music scene, Liz Stringer stands out as one of its leading lights. She writes killer lyrics, has a beautiful expressive voice and can play a mean guitar.

She played at Basement Discs at lunchtime today, promoting her brand new CD Tides of Time, a self produced masterpiece of model song writing and melody.

She admitted to being somewhat hung over, having over imbibed on red wine the night before trying to offset a cold. Still, that didn’t in any way detract from her performance which was moving and absorbing and as always a pleasure to witness.

Basement Discs are featuring local female singer songwriters all this month. Next Friday Suzie Dickinson will be performing with her band. I’m looking forward to this as I am in the process of designing a web page for Suzie, though we have yet to meet in person. Suzie’s new CD 19 Steps is a winner. It is beautifully produced, is chock full of great catchy tunes, enhanced by Suzie's fantastic voice.

Rebecca Barnard will be in store on 21st May followed by the fabulous Lisa Miller on the 28th, so there’s lots of top knotch lunchtime entertainment to look forward to in the near future.

Autumn Racing Season 2010 – The Carnival is Over 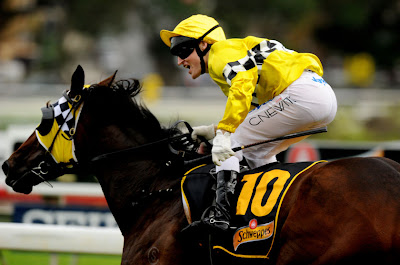 Jessicabeel winning the 2010 Sydney Cup
Well, the autumn racing carnival is over for this year and as usual it was as exciting and as interesting as former years with new stars of the turf emerging into the spotlight and older stars fading out into retirement or the breeding barn.

Unlike former years however, there were no standout performers other than Typhoon Tracy who managed to win three group one races in succession. No other horse managed that, though some smart three year olds carved out a name for themselves. For a change young stayers were to the fore, Shoot Out for example who will certainly be worth watching in the spring, along with Faint Perfume, Once Were Wild, Exceptionally, Linton and Rundle.

The autumn two year olds were an exceptional bunch, with the fillies doing very well against the boys. Whether they can carry over their form into their three year old season is another matter. I’ll be following the fortunes of Star Witness, Crystal Lily, Military Rose, Shaaheq, to name a few.

Jessicabeel kept the flag flying for the females, and Zabeel’s claim to fame as a sire of stayers, by taking out the Sydney Cup from Divine Rebel and Harris Tweed. Zavite and Precedence totally stuffed up their chances by over racing in the early stages of the race. Jessicabeel is certainly another serious contender for the Melbourne Cup judging by the way she won the Sydney Cup, coming from near last to overtake Divine Rebel close to the line with an impressive sprint.

So the spring season is looking like it might be one of the best and who knows who may emerge as the star performer. Typhoon Tracy will be campaigning again for the Cox Plate. Here’s hoping she will compete in the Dato Tan Chin Nam Stakes at Moonee Valley in September, so I can get to see her in the flesh, but if she follows the Liston, Craiglee path she probably won’t.

Meanwhile, the Queensland Winter Carnival will keep race fans interested until then. Graceful Anna will be running again this coming weekend in a Listed 1200 metre race for fillies and mares on the Gold Coast, and hopefully will have better luck than on her last run where she came third on a bog track. Also of interest is the Group 2 Hollindale Stakes over 1800 metres, which has classy field that includes Queen Elizabeth Stakes winner Road To Rock and other good performers, Metal Bender, Rothera and Gold Water.

Wow! How's that?
I managed to tip the first four in the Hollindale Stakes which resulted in Metal Bender holding off Road To Rock who beat Gold Water and Rothera ran into fourth place. A pity I did not follow my own tips and place a bet. It would have paid $460+
Posted by Anne S at 4:54 pm 3 comments: