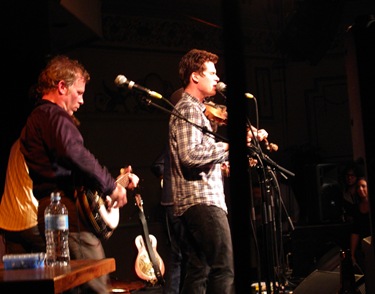 It was a strange night at the The Old Crow Medicine Show last night, at once exhilarating and at another frustrating.

The frustration was caused by the incompetence of the management of the Thornbury Theatre, where we had booked for the dinner & show. You expect paying the extra cash to get a good seat, but it turned out that preference was given to the standing only patrons. The view for those seated was severely obscured by those standing. Actually, even those who had booked a reserved table were better off than us dinner and show bods, as their tables were more to the side and afforded a view of the stage. We were forced to move to get any view of the show, and I could only get photos by sneaking up to the side of the stage and snapping from a back stage viewpoint (as above).

Anyway, whinges aside, it was a great night’s entertainment with The Old Crow Medicine Show delivering their usual high powered, energetic performance. They certainly give their all, and by the second half of the set had stripped down to singlets.

I didn’t manage to note down the whole set list, but songs included Down Home Girl, Methamphetamine, God’ s Got It, Crazy Eyes, James River Blues, I Hear Them All, Caroline of a total of twenty, plus another three performed during the encore.

The surprise of the night was the guest appearance of Justin Townes Earle who joined the band on stage for two songs. He looked like he was having fun, and his reception by the crowd was uproarious. Before the show, I went out for smoke and whilst out the front, a young chap came up and bummed a light from me. Much to my surprise it was none other than Ketch Secor, the leader of the Old Crow Band. I had the opportunity to chat with him, and a friendly young man he was. Later, during a break, I went out for another smoke taking my camera this time and noticed Ketch out there as well. I asked him for a photo and he charmingly posed for this one. 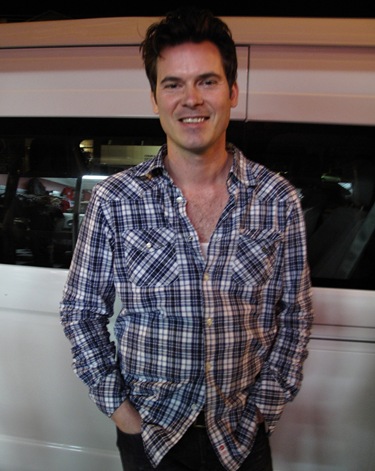 For a change from the baby boomer audiences of the Brunswick Music Festival, the crowd last night was mostly young 20 somethings. They were a friendly and enthusiastic audience, which for sure contributed to the dynamics of the show.

A big hello to Josh and Eric from Mildura who shared our table – it was a pleasure meeting you.

The concert last night was final one of the mad music festival frenzy of the past few weeks, so it’ll be a relief to relax and do something else for a change, until Justin Townes Earle breezes through this town again in mid April.

Oh and Happy Easter everyone. I spent today, Good Friday, cleaning the house, to make myself feel virtuous and marked the day by having a few hot cross buns for lunch.

What a thrill to meet Ketch up and personal, I bet that made your night! The photos are fine, looks like you are part of the band!

So what did you and Ketch talk about?

We talked about music, Melbourne Music venues and such stuff.