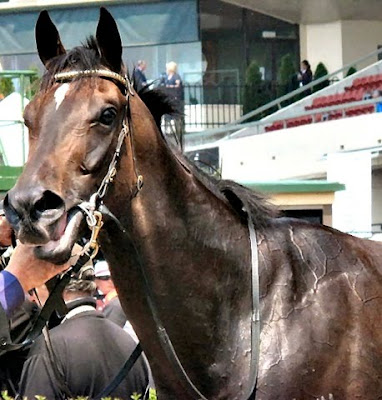 Mic Mac resumes this week in the TJ Smith
Class prevailed last week in Sydney with Typhoon Tracy easily winning the Queen of the Turf, thus making her tally of consecutive Group One victories, four for the season. She will next contest the Doncaster Handicap on the 17th April. More Joyous didn’t run, so we’ll have to wait for another time to see these two clash.

Danleigh took out the George Ryder Stakes and will also run in the Doncaster. Littorio pulled off the surprise of the day with his win in the BMW, and Melbourne filly Crystal Lily won the Golden Slipper in a wayward fashion similar to the win of Haradasun in the Ryder Stakes in 2007, veering wildly towards the outside rail. Faint Perfume showed just how good she was in the Vinery Stud Stakes, with a stunning win, speeding from a no win situation to pip Valdemoro at the post.

This coming Saturday, the feature race is the AJC Derby, run over 2400 metres. It has a field of 15 acceptances 14 colts and geldings and a sole filly in New Zealander Keep The Peace. Victoria Derby winner Monaco Consul, another New Zealander, who hasn’t won a race since then, and failed to fire in the NZ Derby, may show a marked improvement and surprise with his return to Australia, though he’s up against some very smart young stayers. For a start there’s the Bart Cummings trained Rock Classic, beaten a nose by Zabrasive in the Rosehill Guineas, and of course Shoot Out who has won two from two on the track. Derbies tend to be unpredictable, so any of the other runners could win.

There are two other Group One races on the cards, the most interesting race being the T J Smith, a weight for age sprint over 1200 metres. Mic Mac who hasn’t raced since the spring will be resuming in this. He goes well fresh, but will have to be at his best to beat top Sydney mare Hot Danish, and 2009 Rosehill Guineas winner Metal Bender who also makes a welcome return to the track. It is a small but select field which also contains Wanted, Lord Tavistock and Patronyme.

The Sires’ Produce Stakes for two year olds over 1400 metres, is the other Group One and has two Golden Slipper runners, Hinchinbrook and More Strawberries trying their fortunes again this week. They respectively came fourth and third in the Slipper so may win Group One glory this time, if they can beat smart young things Hidden Kisses, Toorak Toff, Skilled, to name a few.

In other racing news this week, 2007 Cox Plate winner El Segundo has been retired after sustaining a tendon injury in the George Ryder Stakes last Saturday. Here’s wishing him a happy retirement - he was a real champion in his day, and always performed well in top company, winning his owners almost $4 million. With those sorts of earnings you’d expect him to roll in clover for the rest of his life.
Posted by Anne S at 3:12 pm

Aah thanks I've been waiting to hear who won the Golden Slipper, I put my £1 on Hinchinbrook and my other £1 in Shaaheq, did you pick out Lily? We have our Grand National meeting at Aintree, Liverpool this weekend.2 years ago I backed Mon Mome, it came nowhere.... last year I overlooked him completely and Mon Mome won it at 100-1. Typical. So I've put £1 on him again this year but yesterday his jockey took a bad fall and was badly injured... so not looking good for tomorrow...oh isn't horse racing exciting.....

Alas I didn't pick Lily, and didn't even have a bet in the race.

Just watched the AJC Derby and was delighted that Shoot Out won, even though I didn't have any money on him. A High Chaparral trifecta wow!