This will be a very brief run down of the music I’ve had the pleasure of seeing over the past few days as I’m feeling bleary after too many late nights – music festival lag has set in and it’s not over yet.

First and foremost to report on, is Lyle Lovett’s concert on Friday night at Hamer Hall. In terms of quality and class, it was on a par with last year’s tour by Leonard Cohen. It was an exquisite night’s entertainment, with Kasey Chambers performing an engaging opening set. 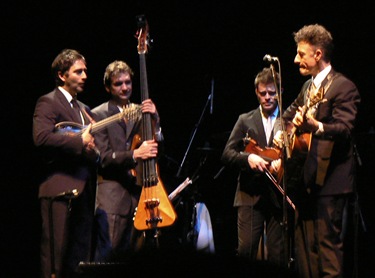 Hamer Hall has strict rules about taking photos, so I’d primed my camera to be unobtrusive, switching off the LCD display, and relying on the view finder. This didn’t work too well at all and I ended up with unusable shots. The photo above was kindly sent to me by my friend Margaret who was sitting near the front and managed to take some very good photos.

Lyle came across as a genial, funny guy with a self deprecatory, quirky sense of humour. His band was excellent and comprised Luke Bulla on violin and vocals, Keith Sewell on guitar, mandolin and vocals, John Hagen on cello, Victor Krauss on bass and vocals, and James Gilmer on percussion. The four part harmonies on songs such as I Will Rise Up, and Ain’t No More Cane were spine tingling and rang out across the excellent acoustics of Hamer Hall to a hushed and awed audience.

Lyle played for something like two and a half hours, covering songs from a wide range of his repertoire. Of course he did If I Had A Boat, also That’s Right You’re Not From Texas, One Eyed Fiona, and Cowboy Man to name a few. There was a marvellous bluegrass segment, with Lyle, Luke Bulla, Keith Sewell and Victor Krauss (as pictured above) gathered in bluegrass fashion around a single mike for Pantry and Up in Indiana.

A real treat it was to see Lyle Lovett finally in the flesh - he’s a class act.

Yesterday was The Basement Discs double attraction In Store of Mary Gauthier and Lil’ Band O’ Gold, which basically took up most of yesterday afternoon. 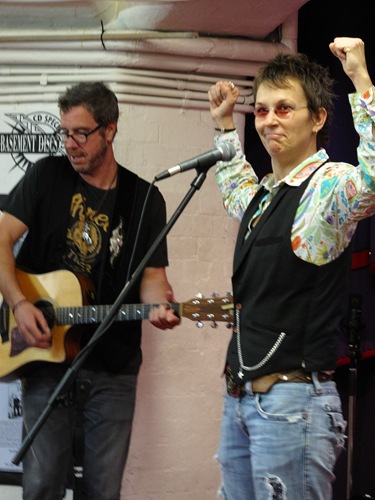 “Hail, Hail the Orphan King, with the crooked smile and a crackerjack ring”

I snapped the above photo of Mary just as she was concluding the song Orphan King, and it coincidently depicts the lyrics of the chorus.

Looking somewhat tousled, Mary accompanied by Ed Romanoff, played an abbreviated version of The Foundling over the space of half to three quarters of an hour. She had performed on Friday night at the East Brunswick Club, so it was generous of her to give her time to a show at Basement Discs at midday on a Saturday. It was another moving performance and warmly received by the sizable audience.

The Lil’ Band O’ Gold were supposed to be following on from Mary at about 1.30pm, but were delayed till about 2.15pm. It was a long wait, but as the store filled up, no one moved from their positions and waited with admirable patience for the band to arrive, which they eventually did, heralded by CC Adcock, looking dangerously attractive, unshaven, wearing sunglasses and holding a stubby of beer. He charmingly apologised for the delay and promised the show would proceed as soon as the rest of the band with gear arrived.

There are eight in the band, and it is amazing that they all mostly squeezed onto the tiny Basement stage… 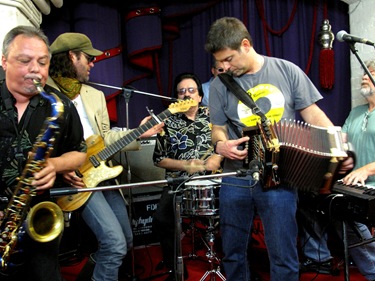 “Lil' Band O' Gold are a Louisiana supergroup of legends of Cajun, Zydeco, Swamp Pop, Country music and Louisiana Rock and Soul who blur the lines between their genres in their mutual admirations.

Anyway, they were well worth waiting for and played a sizzling set of swamp pop, Cajun influenced rock n roll, somehow managing to cope with the tiny arena, swapping microphones and changing places with adroitness. They were, in a word, fabulous.

Tonight it’s The Flatlanders at Spenserlive. Will report back tomorrow.

Awesome music! It must've been quite something to see all those great singers and bands. Lucky you.