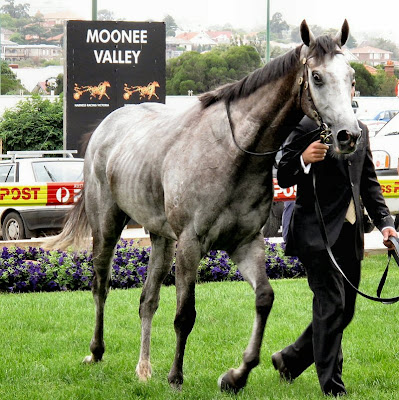 Linton after winning the Alister Clark Stakes - 13/2/10
The Melbourne autumn racing carnival winds up this Saturday at Flemington with three Group One races – the Australian Cup, Newmarket Handicap and the highly anticipated Crown Guineas.

First to run will be the Newmarket Handicap, a sprint over 1200 metres. There are 19 acceptances and what field it is! Top sprinter All Silent , resumes in this race and his opponents include Nicconi who loves the Flemington straight though is questionable at 1200 metres, Starspangledbanner, last start winner of the Group One Oakleigh Plate who could well succeed again, Light Fantastic second up this campaign who could show enormous improvement on his fourth place in the William Reid Stakes, and Peter Moody colts Wanted and Tickets along with the filly Headway are also worth consideration. Turffontein who I witnessed winning the William Reid Stakes is also in with a chance.

It’s nice to see former class galloper El Segundo returning to the scene, though I don’t give him much chance.

The Crown Guineas for three year olds is run over 1600 metres and the big question is whether Denman can continue his winning ways. In my opinion, there’s no reason why he shouldn’t win again, judging by the ease with which he has disposed of his opposition in his build up to this race. His only attempt at running the 1600 metres was in the Caulfield Guineas last spring where he failed to run a place. He’s older now and in peak condition so the extra 200 metres shouldn’t trouble him at all.

The most interesting runner, other than Denman, is Linton, a late nomination for the race. This promising young stayer could well supply a decent challenge to Denman’s pre-eminence judging by the way he won the Alister Clark Stakes a few weeks ago. The sole filly, Set For Fame, who is unbeaten in her last two starts, is the only other runner who could mount a challenge. By all accounts it should be a bottler of a race if only to witness Denman racing for perhaps the last time in Australia. It will be disappointing to Australian race fans if he is sent overseas, as we have fond memories of his sire Lonhro, whom he resembles to an extraordinary degree. Lonhro’s win in the Australian Cup in 2004 represents one of my highlights in Australian racing history.

The Australian Cup (2000 metres) has a time honoured history and has been run since 1863. It has been won by champions such as Makybe Diva, Saintly, Lonhro, Octagonal, Dane Ripper, Northerly to name just a few.

This year’s field contains seven group one winners in a field of 16 runners. 2009 Melbourne Cup winner, Shocking has a chance in this as do reliable performers Master O’Reilly, Sirmione and Sydney horse Tobique, but my heart will be with Heart of Dreams, surprisingly beaten last start by La Rocket in the St George Stakes. The mystery horse Our Aqualeem, an import from Britain, who impressed with his first run in this country with a win over 1600 metres after a 30 month layoff due to injury, could spring a surprise. And then there are the top class mares Zarita and Miss Maren who could feature in the placings.

In Sydney the races are at Warwick Farm and also feature a Group One event, the Chipping Norton Stakes over 1600 metres. Sydney’s best middle distance runners and stayers are entered in this race. With old trooper Theseo, Danleigh who won first up a couple of weeks ago, in form Rangirangdoo, Vision & Power, Alcopop, Rock Kingdom and Road To Rock you’ve good a solid field. Throw in mares Purple and Palacio De Cristal, plus import Speed Gifted and it becomes quite interesting.

Another two to look out for in Sydney is the Group Two Surround Stakes (1400 metres)with More Joyous against her own age group and sex who she should easily account for, and the Group Three Kindergartan Stakes (1100 metres) which sees the return of the exciting filly Solar Charged.

So it’s a Super Saturday indeed and no doubt will be watchable from the comfort of home on free to air television.

Last week it was great to see Typhoon Tracy win her fourth Group One. She’ll continue her autumn campaign in Sydney possibly in the Coolmore Classic which she won last year. There is a murmur that she will try again for the Cox Plate in spring. It’d be great if she could emulate Sunline and win it.
UPDATE - Saturday afternoon

A few minutes after the running of the Newmarket Handicap, a giant and vicious storm hit Melbourne and inundated the Flemington track to such an extent that the rest of the meeting was called off. Hailstones the size of iceblocks battered the city. They created an amazing din - great thuds on the roof, that freaked out the cats and sent them scurrying for cover.

Of course it's disappointing that the races were abandoned, but I'm certain they made the right decision in terms of safety for the horses. So we'll have to wait until next weekend to see the Crown Guineas and Aus Cup.
Posted by Anne S at 3:07 pm

What a beautiful looking horse. I haven't been to the races for years, but have recently visited racing stables - love being that close to the horses. Beautiful animals ...

Thanks for dropping by.

Yes, Linton is a lovely boy. One to look out for in the Spring. Very keen to see how he goes this weekend.

Moonee Valley Race Course is excellent for taking photos of horses - you can get really close.

Agree!! Lovely horse. You got some fab photos at Moonee Valley on Valentines Day, they were brilliant.We are looking forward to the Cheltenham Festival in 8 days time.xx

Thank goodness the Newmarket wasn't run five minutes after - it would have been disaterous.