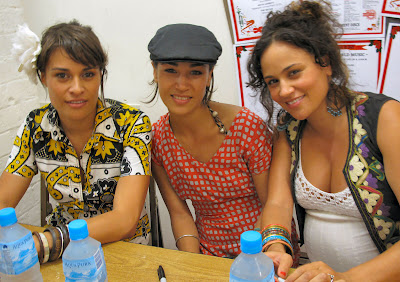 L to R - Kelly, Eliza and Talei Wolfgramm at Basement Discs 26/2/10
What a refreshing change of music genre, seeing the highly engaging, eye and ear pleasing Wolfgramm Sisters, performing their brand of pop, rock, soul and blues at Basement Discs on this hot summer day in Melbourne.

I have grown fond of their debut self titled CD since acquiring it in January, so it was great to hear some it of played live today with a few new covers that are not on the CD - a couple of Pointer Sisters songs; “Shaky Flat Blues” for one, a great little blues number performed with great verve.

All three sisters took turns to lead the singing with Eliza performing, much to my delight, “Come Pick Me Up”, a Ryan Adams composition, Kelly doing the Rolling Stones “Loving Cup” and Talei “River Boulevard”, a Barbara Moritz tune. They also played two of their own compositions “Don’t Stop” and “King”, both fine songs that don’t sound in the least out of place in their repertoire and stand up to the excellent covers on their CD to such an extent that you could swear you’d heard them, or something like them, before.

In fact it was a fantastically good little show which I’d certainly like to see again. The Wolfgramm Sisters are a quality act and are sure to go on to fame and fortune.

Check them out on their My Space page.
More music news as far as Basement Discs is concerned...
They have a spectacular line up for March with various Music Festival artists scheduled to perform.
There's US singer/songwriter Kim Richey on 19th March, Mary Gauthier and Lil' Band O' Gold on Saturday 27th March and UK artist Eddi Reader on the 30th March.
And before all the above, The Junes (Sarah Carroll, Suzannah Espie and Glenny Rae) will be doing an in-store on 12th March.
A blockbuster month of music is in-store and on stage next month - can't wait!
Posted by Anne S at 4:27 pm