You may remember, back in October last year, I wrote about the rescue of Lucky the baby ringtail possum.

Here she is now… 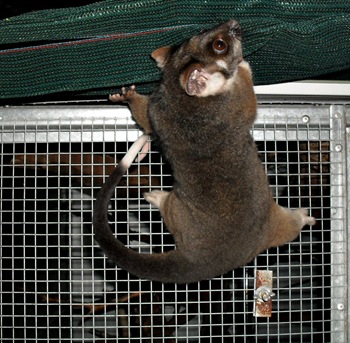 … making her way out into the wide world. (photo by Pat)

As you can see she has thrived under the care of Pat, who over the months, has grown very fond of her.

Pat only recently allowed the small colony of ringtail possums, of whom Lucky is part, out of their cage at night. Apparently they all bounded off into the bush with alacrity, but return each morning to their nesting box.

So it’s really heart warming to think of Lucky wild and free with her own “family” of possums to hang out with.

As I now work on the same floor as Pat, I get to see and handle all the wonderful creatures she has in her care. The little ones who need 24 hour attention, Pat brings into work. She has had tawny frogmouth chicks, sugar gliders and recently an exquisite little marsupial called a dunnart.

The dunnart is a desert dwelling carnivorous marsupial related to the Tasmanian Devil, though minuscule in size. The one Pat had in her care was a baby fat tailed dunnart, half a finger’s length long, a perfectly formed, immensely appealing little beast. It will grow to about the size of a mouse on reaching maturity.

I must admit I’d never heard of a dunnart before, so it is fascinating to come across these unusual and relatively unknown native animals at my workplace no less.

Here’s a photo of an adult fat tailed dunnart. 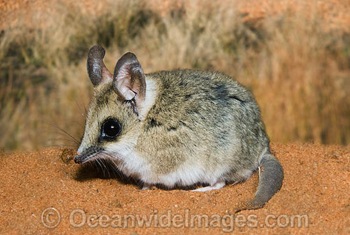 Aren’t they simply the cutest beasties ever!