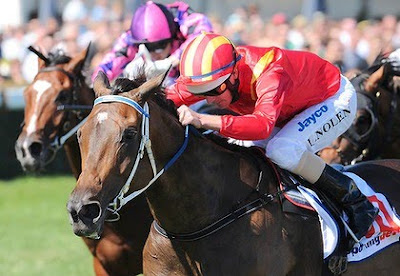 Typhoon Tracy winning the CF Orr Stakes
Has Typhoon Tracy scared off her opposition or what? There are only six acceptances for the Group One Futurity Stakes (1600 metres), the feature race on the cards for Saturday’s racing at Caulfield. Looking at the acceptances it appears to be a two horse race with Sniper’s Bullet being the only horse that could threaten Typhoon Tracy’s attempt to win another Group One.

Of course one of the other runners, the Gai Waterhouse trained Joku or the Hawkes trained Dao Dao, could surprise, but I’ll be barracking for Tracy.

The only other Group race at Caulfield is the Group Two Autumn Classic (1800 metres) for three year olds with, to my eyes, a rather uninteresting field. Viking Hero a son of old favourite Elvstroem could be a chance, as could Take The Rap, who came second to Linton in the Alister Clark Stakes, and perhaps, Extra Zero.

At Rosehill in Sydney there are several interesting Group Two and Group Three races, most notably the Hobartville Stakes, a race over 1400 metres for three year olds. The field has several youngsters I follow, Shoot Out and Manhattan Rain for starters, and the promising Kidnapped starting his autumn campaign.

Oh, and Rebel Raider, winner of the Victoria Derby in 2008 and one time favourite for the 2009 Melbourne Cup, is resuming tomorrow in Adelaide in Race 6 at Morphettville. He was sidelined by injury last year. Let's hope he comes back in good shape.
Last weeks results were a mix of the expected, Denman, for instance, again without effort, winning the D’Urban Stakes, and the unexpected, with La Rocket winning the St George Stakes over Heart of Dreams and Miss Maren.

I was delighted that my hunch, Star Witness, won the Blue Diamond Stakes, coming from near last to overtake Shaaheq and Beneteau in the finishing stages. I had a bet on him on the strength of my hunch, and he paid handsomely. Starspangledbanner showed he wasn’t a one hit wonder with a stunning win in the Oakleigh Plate, though it was disappointing to see Weekend Hussler struggle to keep up. He pulled up lame and will again be spelled in the hope that he can return in the spring. Viewed is also out for the autumn after contracting a virus.

But the good news is that Linton will take on Denman in the Crown Guineas on Super Saturday on 6th March. It will certainly add some excitement to the race which otherwise would probably have been Denman’s on a plate, despite the pundits querying his ability to run a mile. A great contest is anticipated between the black and the grey.
Posted by Anne S at 2:59 pm