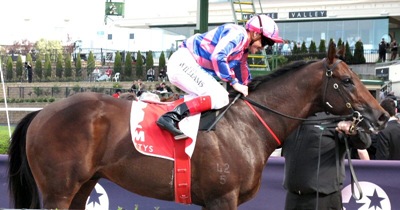 I had a very quiet and sober Melbourne Cup Day for a change. Over the past few years some friends of ours always hosted very enjoyable Melbourne Cup parties. Since the last one in 2008, they have moved to Northern New South Wales, so we are now left to our own devices on the Cup Day holiday. I chose not to party, and stayed home, placing a few bets online.

The Melbourne Cup itself was of course responsible for a certain amount of anticipatory excitement, though it was run at a slow pace. According to the jockeys reports it was also quite rough. Daffodil got hit on the head, Viewed almost fell, and various other mishaps destroyed the winning chances of other contenders. However, it was a good win by Shocking. He stayed out of trouble by racing three wide for most of the race and was therefore able to sprint freely at the finish. A good quinella in terms of names, Shocking and Crime Scene – if only I’d thought of it earlier. In fact Crime Scene, my roughie bet, was the only one who won me money.

The Victorian Oaks was run yesterday and Bart Cummings added to his spring haul when his filly Faint Perfume won, as was expected.

So on to the last day of the Melbourne Spring Carnival – Emirates Stakes Day. To mark the end of the season there are two Group One races, the Patinack Farm Classic, a sprint over 1200 metres, that has Apache Cat having his last race in Australia before heading to Hong Kong. There’s also his stable mate Mic Mac who was narrowly beaten by the Cat in the Schweppes Stakes a few weeks ago. As usual it’s a good field that also contains top class sprinters Nicconi, All Silent and Danleigh, all in with a chance.

The feature event, the Emirates Stakes run over 1600 metres, sees Cox Plate winner So You Think back to claim more scalps. He’s up against the older horses again, Vigor, Black Piranha, Eagle Falls, Road To Rock and Rightfully Yours, a full brother to Heart of Dreams to name a few. Will So You Think win again and prove to be the freak racehorse he appears to be?

And so ends the Spring Racing carnival for this year, it’s been fun and fantastic as usual.

Did you get chance to watch the Breeders Cup Classic in Santa Anita... if ever there was an example of a horse knowing exactly what was going on it was last night...Zenyatta was pointing her toes and wiggling her backside as if to say "look at me, look at me" after she'd won... fantastic race.

I just watched it on utube - amazing race!.