Rockin’ Out at Basement Discs with Dave Hogan’s Meltdown 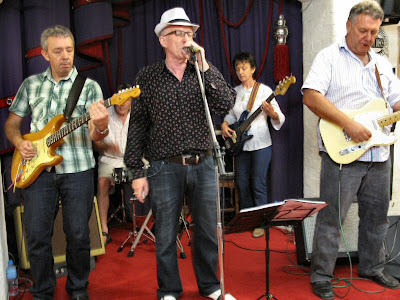 Dave Hogan’s Meltdown live performance at Basement Discs at lunchtime today, was the perfect music for the weather - hot and sultry - as it is in Melbourne today.

Dave Hogan has been part of the local Melbourne scene since the 1970s, performing in bands like Southern Lightning, The Paramount Trio & Blues Hangover. I remember going to see Southern Lightning back in the early ‘80s. They used to play at the John Barleycorn Hotel in Johnston St Collingwood then, and were a fantastic rocking blues band.

Originating in 2002, the current band is a classic harmonica/guitar combo with five players in all. Dave Hogan leads the singing and plays a mean harmonica, David Adam and Paul Neuendorf are both wonderful electric guitarists, and husband and wife, Ken and Chris Farmer, play drum and bass respectively. Together they create a satisfying big rich sound - the best rock ‘n’ roll money can buy.

They have a new CD called Holler And Twang which was the recipient of several awards in MBAS (Melbourne Blues Appreciation Society) Awards this year. We were given a sampler today to the tune of about half a dozen songs that included the title track a country rock number, That’s How I Got to Memphis, a Tom T Hall song which is also covered by Buddy Miller, an artist Dave Hogan admires. Also in the mix was April Fool, sung by Paul Neuendorf who wrote it and Going To Texas QLD.

Check out Dave Hogan’s Meltdown on My Space or their website.

Thanks so much for your lovely words and encouragment to "keep on rocking" - I promise I will - have a wonderful 2010 and please come and say hello at agig some time. Cheers Dave Hogn

Thanks so much for your lovely words and encouragment to "keep on rocking" - I promise I will - have a wonderful 2010 and please come and say hello at a gig some time. Cheers Dave Hogan

My pleasure, have a good 2010 yourself and to be sure if your band is anywhere in my neighbourhood I'll attend and say hello.

Hi, Anne - Dave sent me the blog link, and it was nice to read you review. I'm pleased that you enjoyed the music at the Basement Discs show.
Nice photo, traditional in that the drummer is obscured by the guitar. Still, the good looking Farmer is there, looking good!

So true - the drummer always gets obscured. I did however take several photos and there are one or two with you centre stage.

I try and get the whole band into shot, but it all depends on the movements of the subjects, who gets short changed or blurred. Quite a challenge.