Melbourne Buskers – a walk through the Bourke Street Mall

Not only does one have the opportunity to see great live music any night of the week in one of Melbourne’s many venues, the city centre is home to an extraordinary range of buskers, playing all sorts of music on the street.

On Wednesday at lunchtime I decided to go down to the Bourke Street Mall and take photos of the buskers who were playing there on the day. Bourke Street Mall, for those who don’t know, is a short block between Elizabeth Street and Swanston Street and is traffic free, except for trams.

The buskers seem to change daily, but some are regulars.

This bloke plays golden oldies on the piano. As you can see he’s quite a character. 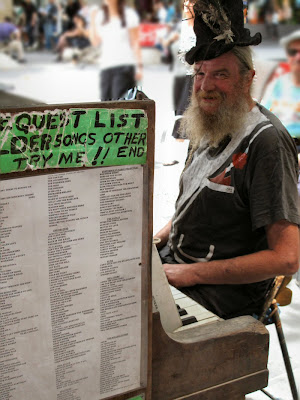 Yesterday, in his spot was a guy simultaneously playing a double necked guitar and a didgeridoo, with a sound effects machine providing further accompaniment. 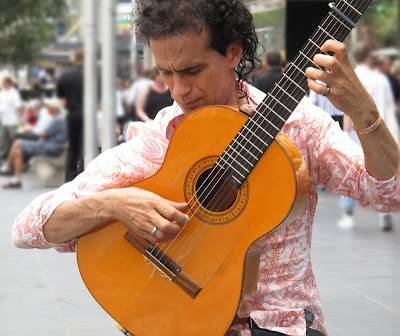 The Peruvian pan piper who looks like a member of the band that entertain shoppers at the Victoria Market, is also in the mix of music as you stroll through the mall. He wasn’t playing as I walked past, so I didn’t photograph him. 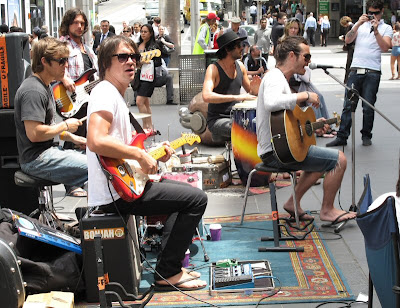 Bonjah are the princes of the sidewalk. A five piece band, they’ve been playing outside the GPO for a couple of years, and appear to have gained a large following, judging by the crowd sitting on the GPO steps watching their show. I’ve enjoyed their music while waiting for the tram, thinking to myself…these guys are pretty good. They reminded me originally of Ryan Adams, and still do, though there is a touch of Bob Marley in there as well.

They released their debut CD earlier this year, called Until Dawn, and it’s a beauty. I finally got around to buying it and listened to it the other night. It’s a great mix of roots rock tunes, all original songs that encompass reggae, rock, blues and alt country. The band apparently launched the CD at their spot in the mall outside the GPO.

The Bonjah band is led by Glenn Mossop who sings lead vocals and plays acoustic guitar. He has an interesting and attractive voice that is hard to define, though at times it reminds me of Ryan Adams and someone else I can’t quite place.

The rest of the band is made up of an electric guitarist (Regan Lethbridge), bass (David Morgan), drummer (Dan Chisholm) and percussionist (James Majernik).

Besides doing street shows in the mall, they have been touring extensively everywhere and have supported some class acts such as Paul Kelly, The Original Wailers, Counting Crows to name a few. They will be at the Queenscliff Music Festival later this month and also at the Port Fairy Folk Festival next year.

Definitely a band on their way up, I encourage you to check them out either online or if you’re in the city, stroll to the corner of Elizabeth & Bourke and perhaps you’ll catch them live.

Or if not them, some other performer is sure to be roundabouts somewhere.