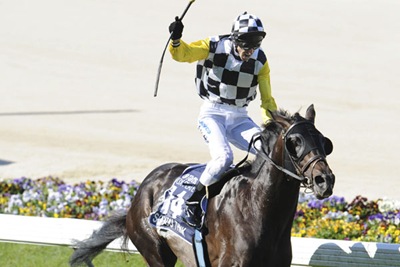 A sensational day of racing is on the cards for this Saturday with no less than four Group One races, including the Victoria Derby. The spring racing carnival in Melbourne is drawing to a close with only three more meetings after this weekend, the most interesting of course being the Melbourne Cup next Tuesday.

Last Saturday’s Cox Plate was a ripper, with Bart Cummings surprising everyone (again!) when his three year old colt So You Think turned the tables on all the fancied runners and won by two and a half lengths to the other three year old Manhattan Rain, with the oldster Zipping coming third.

I had been contemplating the Plate in terms of planetary influences having drawn up a horoscope for the occasion out of interest. Mercury was in exact aspect to the Ascendant at the time of the race, which indicated a horse with a Mercurial name would win. With Uranus also in aspect to the Ascendant the indications were for a surprising winner. I woke in the middle of the night with the thought that So You Think was the name most applicable to Mercury. Did I follow this hunch? Unfortunately, no.

It was great to see Apache Cat in winning circles again. His win drew a huge cheer from the crowd. He’s enormously popular, and even though he’s now getting on in years, he can still beat high quality fields like the Schweppes Stakes.

Avenue also won as expected. She has now been spelled so we’ll have to wait for autumn to see her race again.

So onto Derby Day…

The Coolmore Stud Stakes over 1200 metres is the first of the Group One races and is an open race for three year olds. It has a very classy field which includes Phelan Ready, the Golden Slipper winner, Demerit with both Lonhro and Foolish Pleasure factors in his breeding, brilliant fillies Irish Lights, Headway and Paprika, leading to the question - will the girls be able to beat boys?

Traditionally the last chance for unqualified horses to qualify for the Melbourne Cup, the Mackinnon Stakes (2000 metres) has an interesting field which includes Caulfield Cup winner Viewed, unsuccessful Cox Plate contenders, Scenic Shot and Zipping , and others like Racing to Win, Vigor, Rangirangdoo, who won the Crystal Mile last Saturday, and Cima De Triomphe, unsuccessful in the Caulfield Cup, no doubt running in the hope he can win some honour for Luca Cumani, who brought him all this way with disappointing results so far.

The Derby is always hard to pick and often results in a surprise winner. Run over 2500 metres it is a staying contest for colts and geldings. Half brother to last year’s winner Rebel Raider, Shamoline Warrior is one of the main chances, along with New Zealand hope Monaco Consul. I rather like Gathering who has not been out of place in all his starts and has run close second to the best. There’s also Viking Ruler, one of Gai Waterhouse’s youngsters. His father Elvstroem won this race in 2003. Rockferry and Our Heir Apparent also cannot be overlooked.

The stars say (according to my interpretation of a horoscope of the race) that a horse with a Martian or Lunar name has a chance. Mars in Leo is trine to the Moon in Aries and the Mid Heaven in Sagittarius, a grand trine in fire, which being a favourable alignment of planets, could indicate victory for the favourite.

Typhoon Tracy will be contesting the Myer Classic (1600 metres), against her own sex again. She’s drawn wide this time, but shouldn’t be too disadvantaged by this as she likes to mix it with the leaders, if not lead. She will be up against Hot Danish once more and super smart mare Zarita. Glowlamp is also in the running as is Gold Water and Jolie’s Shinju. I’ll be barracking for Tracy.

My Super Stable has 3 runners this weekend – Typhoon Tracy, Shamoline Warrior & Gathering, the last two being substitutes for Denman and Heart of Dreams.

I still have two substitutes left, so after the Derby I can buy two Cup horses to compliment Efficient and Daffodil.

Sorry to hear about Shamoline Warrior :(

I'm peeved that Shamoline Warrior and Efficient have been scratched. Efficient was my major hope in the Cup. I'll substitute him with Viewed who ran a lovely race just then.

And Bart scored again with Faint Perfume in the Wakeful - looks good for the Oaks.

As regards to Astrological pointers, it struck me, after the Coolmore, that Headway is a very Aries name what with the moon being in that sign.