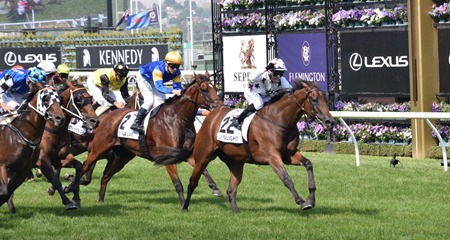 The sun was shining and the roses were in full bloom for Super Saturday at Flemington last weekend.

With two super Group 1 races on the program it was a must attend event, and delivered accordingly.

Best of all was the win of three year old Sunlight in the Group 1 Newmarket Handicap, the first filly to achieve this since Alinghi saluted in 2005. Interestingly, Alinghi was sired by Encosta De Lago, who is Sunlight’s great grand sire.

Due to the train timetable I was obliged to get to Flemington fairly early, so arrived as Race 2 was in progress. I saw the runners flash past but didn’t get any photographs. I’d successfully smuggled my step through security so stowed it in the usual spot before heading to the stalls area.

The rampant roses of autumn stymied photographing the runners in their stalls, though I did manage to get a rose free snap of Sunlight. 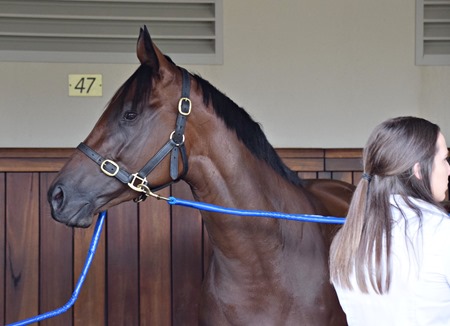 Sunlight in her stall

Giving up on that idea I returned to the prime spot just past the finishing post on the West Lawn.

Flemington was in party mode. In fact the theme for the day was The Big Garden Party and a large section of the West Lawn was taken up by Pop Up restaurants, wine bars and the like. 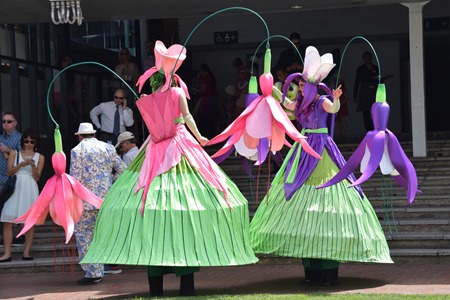 …and the three piece band whom I’ve seen wearing various costumes in the past, including as Christmas presents, were clad in floral suits for the occasion. 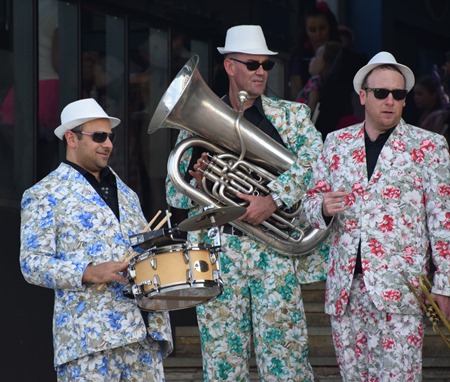 The most ridiculous entertainment on offer was a rotating selfie stick, where patrons had the chance to preen and pose for photos whilst being whirled on a platform. It was vastly amusing for this cynical spectator who wouldn’t be seen dead on such a contraption. Besides, I’d probably fall off. 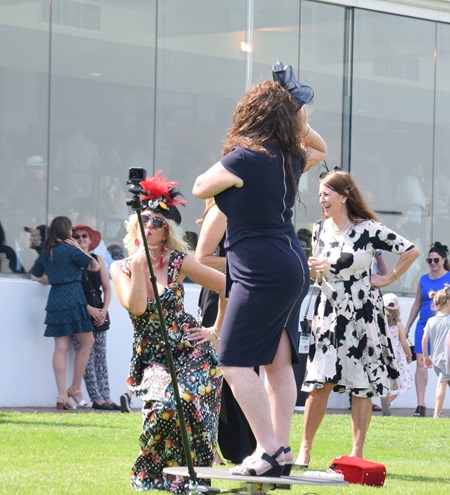 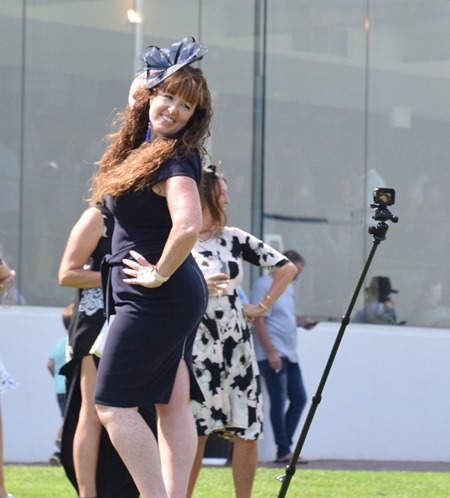 At the far end of the West Lawn, dubbed The Elms, a band was playing covers. I heard their rather good version of the Bee Gees classic Staying Alive sometime during the afternoon.

Back to racing, Race 3 was the Furphy Ale Handicap, a race over 2000 metres and not terribly interesting as races go.

It was won by the aptly named Hang Man (from Windsor Knot/Halliard) who fought out the finish with Valac. Race favourite,  Thunder Cloud finished third. 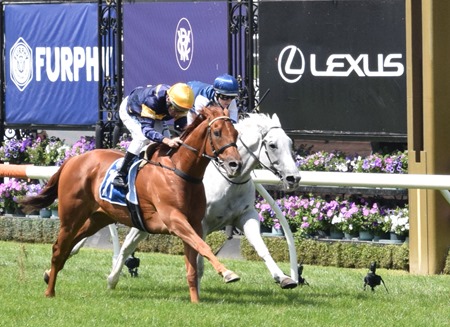 Hang Man (outside) head to head with Valac 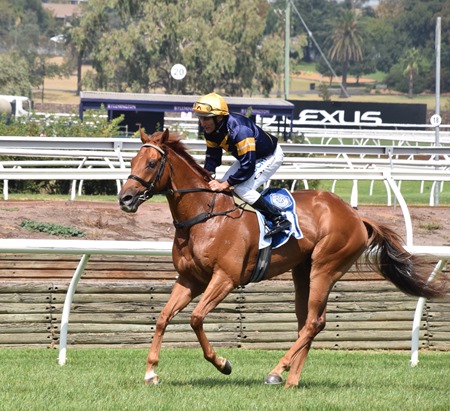 The Group 1 races were scheduled as Race 6 (Newmarket) and Race 8 (Australian Cup), so the earlier races were good for photography practice and a moderately interesting way to kill the time.

Having a step is an advantage, not only for surmounting the high outer rail, but also allowing some flexibilty in placement, when official photographers or the roses block one’s point of view.

Race 4 was the Incognitus Stakes, a sprint for three year olds over 1100 metres.

Sunset Watch started as favourite, but was outclassed by Anjana who won by over a length.  Fine Dane finished third.

Anjana has a good lead racing to the finishing post 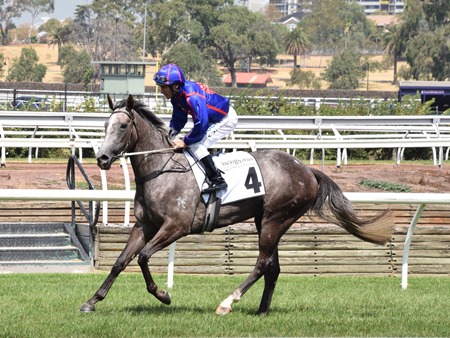 The Group 2 Sires Produce Stakes, a race for two year olds over 1400 metres was the fifth race on the program. 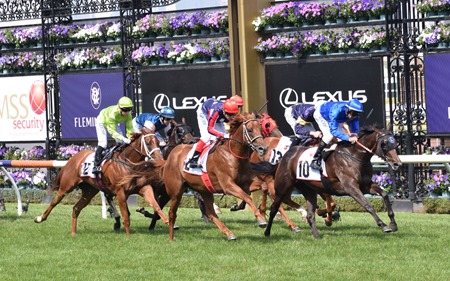 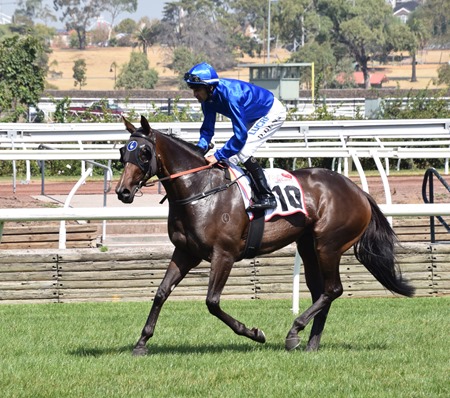 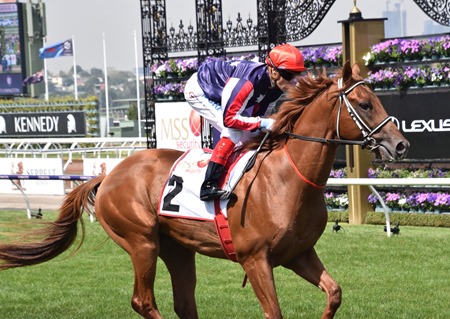 Dalasan on his way to the barriers

Regarded as one of the best in recent years, a huge field of 22 runners started in the Group 1 Newmarket Handicap.  It included such quality sprinters as Redkirk Warrior who has the rare distinction of winning the race consecutively in 2017 and 2018. He was aiming to win it a third time, but ran out of a place. Other Group 1 winners in the field were Santa Ana Lane, Booker, In Her Time, Brave Smash, Voodoo Lad and of course Sunlight.

Sunlight carried the featherweight of 50.5kg, which ruled out her regular jockey Luke Currie who couldn’t comfortably meet the light weight, so her rider was Barend Vorster, a mystery jockey to most Australian followers of the turf. He was born in South Africa, but spent many years riding in Singapore, only recently becoming a stable jockey for Tony McEvoy.  His career in Australia has certainly started out well and he rode Sunlight a treat.

Sprints down the straight at Flemington are generally problematical to photograph, where big fields often split in two, racing on both sides of the track. Fortunately in this year’s Newmarket they raced in a bunch down the middle of the track, so I did manage to get several reasonable photos of the finish.

Leading from the start to the finish, Sunlight remained strong to the line, winning by almost a length from race favourite Osborne Bulls with Brave Smash finishing a narrow third. 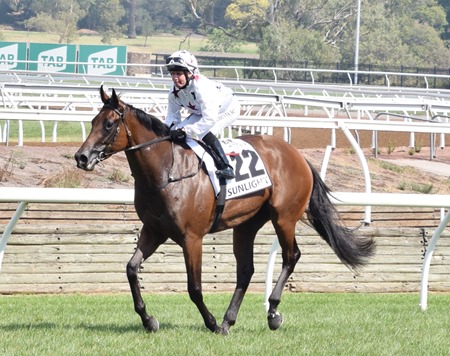 Sunlight strolls back to scale 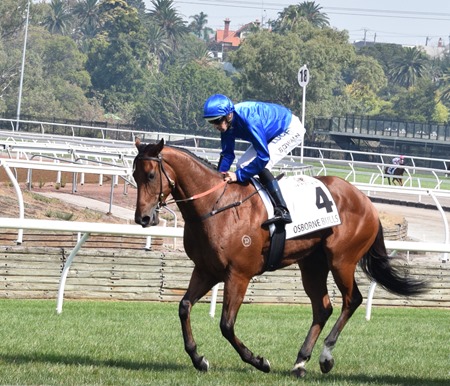 Sunlight’s next assignments are apparently the Group 1 William Reid Stakes at Moonee Valley on 22 March and the T J Smith Stakes at Randwick on Derby Day in early April.  She may very well succeed in winning them both.

Sandwiched between the two Group 1 events, the Group 2 Kewney Stakes was up next. A race for fillies over 1400 metres,  it resulted in a win for Spanish Whisper who defeated Victory Kingdom and race favourite Angelic Ruler by a narrow margin. 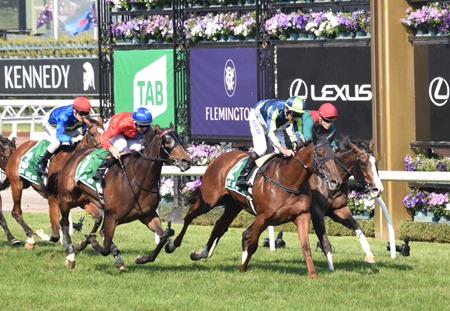 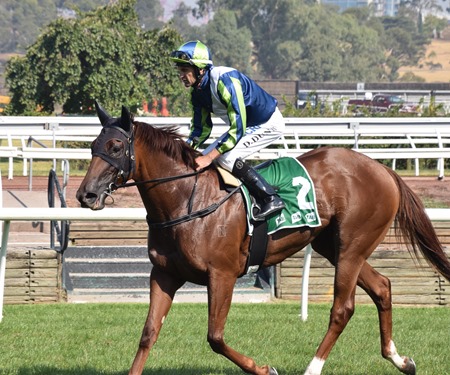 The must see race of the day in Sydney was the Randwick Guineas, starring The Autumn Sun.  Watching it on the big screen from  a distance it seemed that The Autumn Sun couldn’t win, with super consistent filly Fundamentalist stealing a big lead down the straight. With an amazing turn of foot, rather reminiscent of his famous stablemate Winx, The Autumn Sun caught up with Fundamentalist on the line to win by a head.

That was a fine segue into the Australian Cup at Flemington.

Avilius was the hot favourite to take out the Australian Cup, but finished out of a place. Harlem’s last win was in the Australian Cup last year and he repeated that feat, winning at big odds from the game Shillelagh who looked to be the winner, and race leader Trap For Fools. 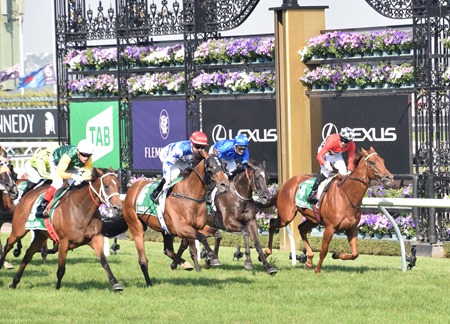 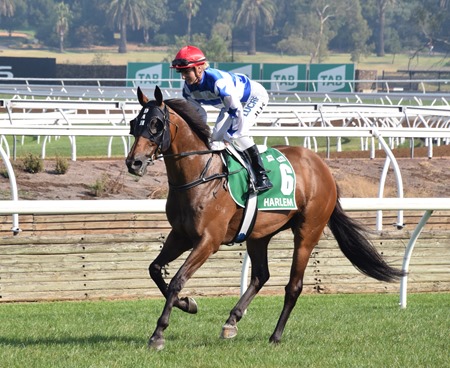 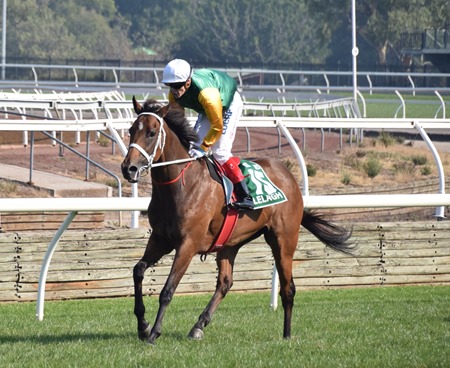 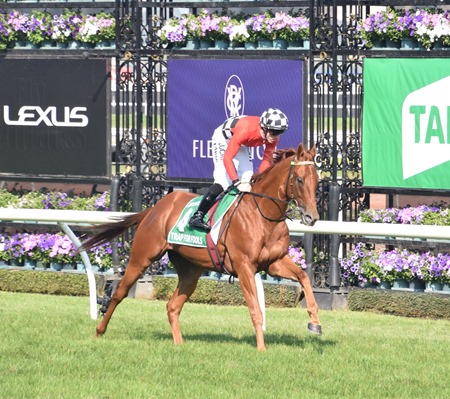 Trap For Fools on his way to the barriers

I was hoping to get a photo of 2017 Melbourne Cup winner, Rekindling, but he whizzed out onto the track so fast I missed the shot. Ditto with him returning to scale. However, as he finished last I inadvertantly managed to capture several shots as he crossed the finish line well behind the rest of the field. 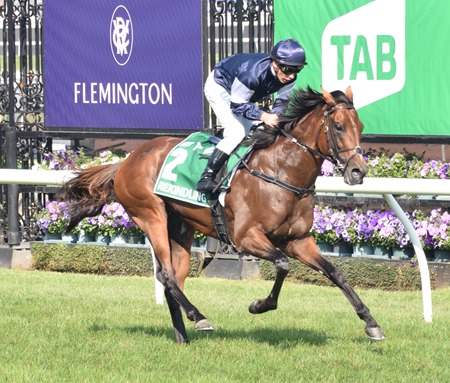 Rekindling at the tail end of the field

The Lloyd Williams horses, Rekindling and stable mate Almandin, 2016 Melbourne Cup winner, are something of an enigma.  Why were they in the field?  Both finished well back and never threatened the leaders.  Alamandin hasn’t raced for almost a year and Rekindling’s last race was the 2017 Melbourne Cup.  They both were nominated for next Saturday’s All Star Mile and were first and second emergencies until they were withdrawn from consideration.

Normally, Super Saturday at Flemington marks the last Saturday of Melbourne’s Autumn Racing Carnival, but this year the oxymoronic All Star Mile next Saturday rounds off the season.

A new fangled concept race worth $5 million, the All Star Mile field was assembled through a public vote, with four wild card entries selected by the organisers.  Far from being All Stars, half the field are 100/1 chances.

Whatever, it should be an interesting race, which I’m looking forward to seeing in person.