A Princess of Tasmania & The Queen of the World 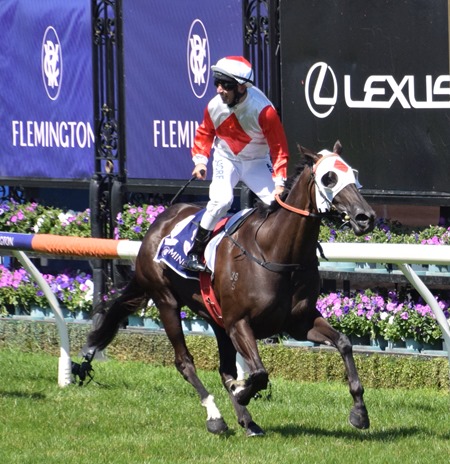 Girl power was to the fore again last Saturday with Queen of the Turf, Winx, winning her 31st consecutive race, and also achieving 23 Group 1 wins - a world record.

At Flemington, Tasmanian filly Mystic Journey won the feature Australian Guineas, becoming only the 5th filly to win the race and the first Tasmanian trained horse to win a Group 1 on the mainland.

Because of the extreme heat, the races at Flemington were brought forward by two hours, so the last race on the card was at 3.20pm.

And hot it was, though it deterred the crowds making it easy to find a seat in the shade between races.

I reached Flemington earlier than I originally planned, shortly before midday, in time to watch race 3, the Bob Hoysted Handicap, a sprint over 1000 metres.

It was won by She’s So High by a length from veteran Thermal Current with I Am Someone running third. 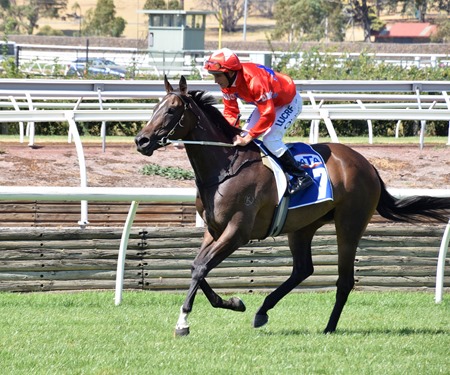 She’s so High returns to scale

I decided to give race 4 a miss and go and check out the stalls. Not many of the star horses had arrived, so I didn’t get any stall photos, and besides the rampant rose hedges made getting clear shots very difficult.

Returning to my favourite spot on at the access gate, I retrieved my step from behind the rose hedge and pretty well stayed there for the rest of the afternoon.

The roses were out in abundance… 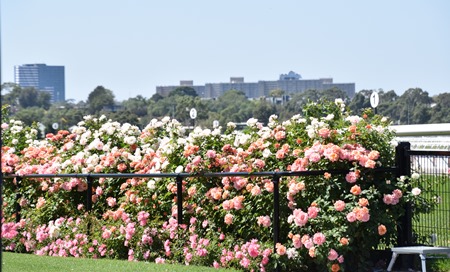 Rose hedge next to access gate, with my step ready to stand on

Race 5 was the not very interesting Seppelt Wines Plate, a handicap race for three year olds over 1400 metres.

Age of Chivalry, last seen running second to The Inevitable in the C S Hayes Stakes was the favourite, but he was beaten by a nose by 14/1 shot Mr Quickie, with Brilliant Choice a short distance back, running third. 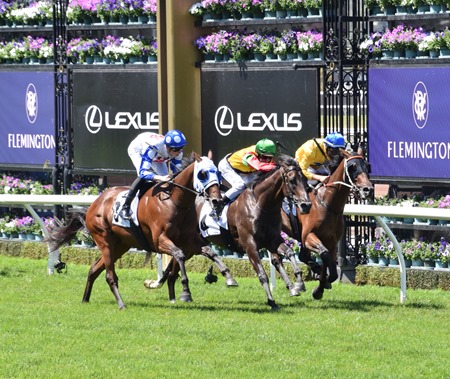 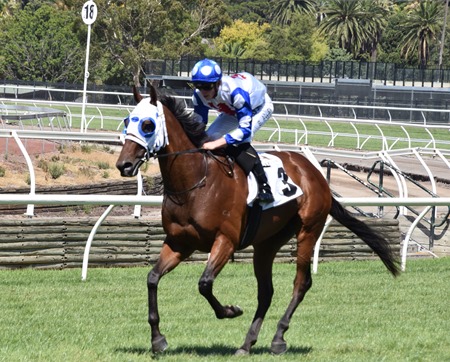 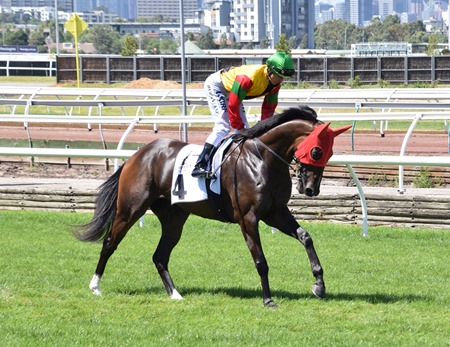 Age of Chivalry on his way to the barriers

The next three races were of more interest and race 6, the Group 3 Shaftesbury Avenue Handicap also resulted in a long shot winner. Violate stole the prize from Streets of Avalon and Zebulon. 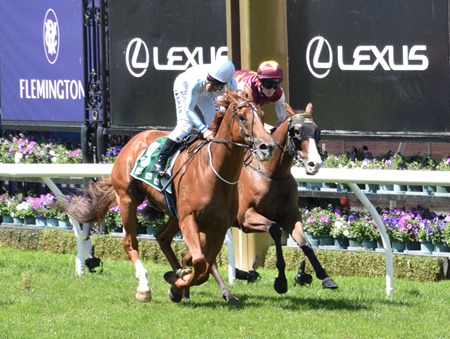 Violate & Streets of Avalon cross the finish line together 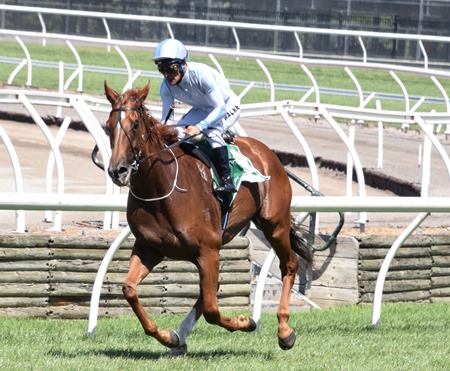 Streets of Avalon on his way to the barriers 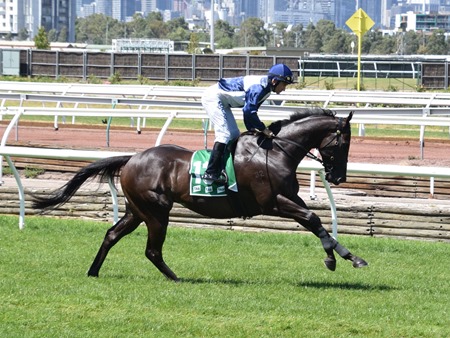 Zebulon on his way to the barriers

The David Hayes trained Fifty Stars, So Si Bon and Cool Chap ran the trifecta in race 7, the Group 2 Blamey Stakes.  2017 Melbourne Cup runner up Johannes Vermeer, having his first start since that race, finished fourth. 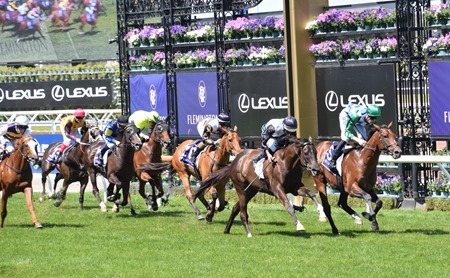 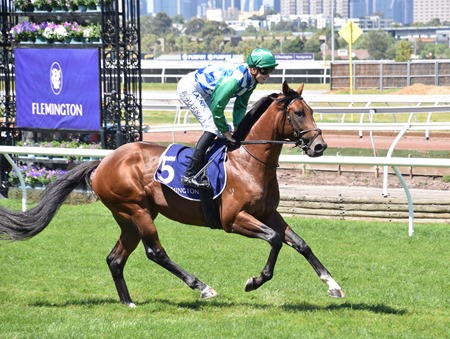 Fifty Stars on his way to the barriers 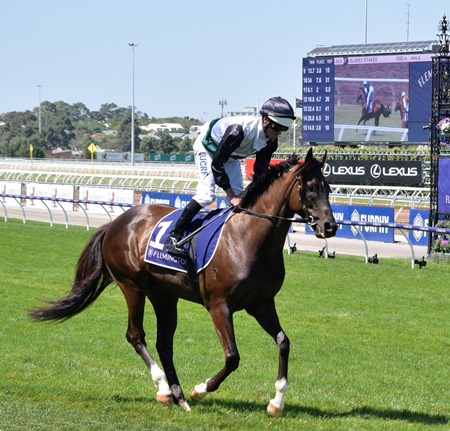 So Si Bon on his way to the barriers 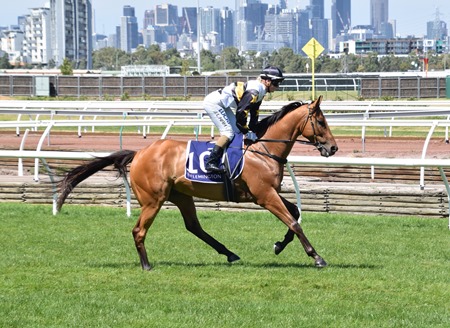 Cool Chap on his way to the barriers 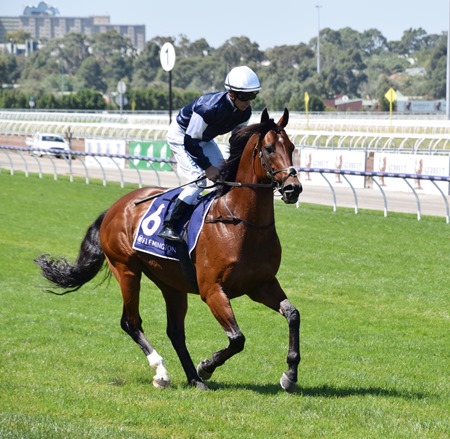 Johannes Vermeer on his way to the barriers

Due to the heat, the interval between races was reduced to 35 minutes rather than the usual 40 minutes, so it wasn’t long to wait for the feature Group 1 Australian Guineas, scheduled to run at 2.45pm.

Amphitrite was the starting favourite with Mystic Journey being second choice. 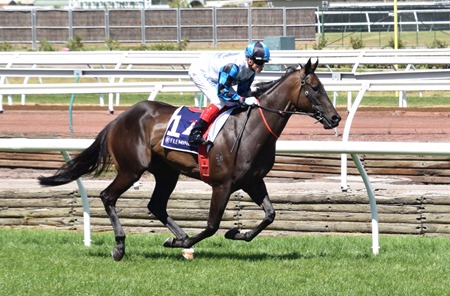 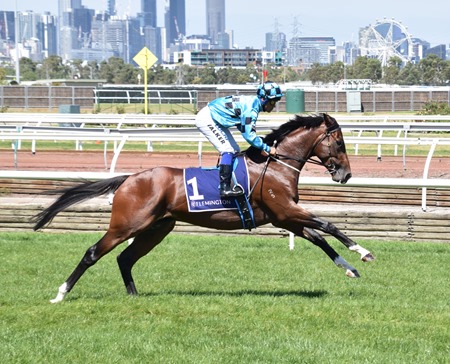 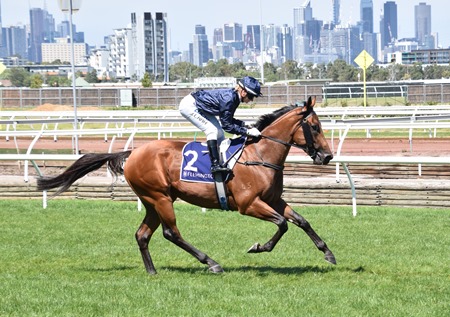 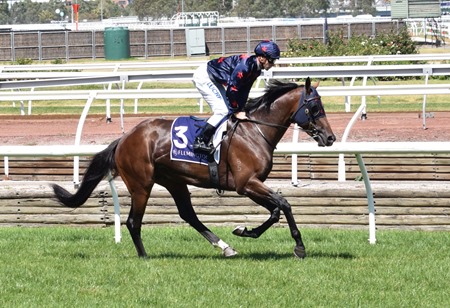 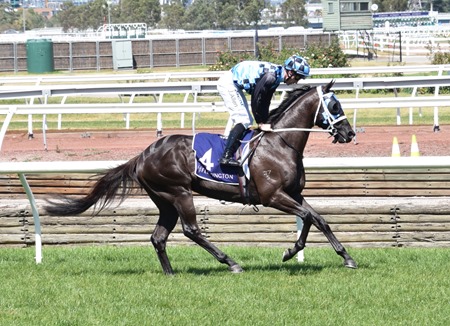 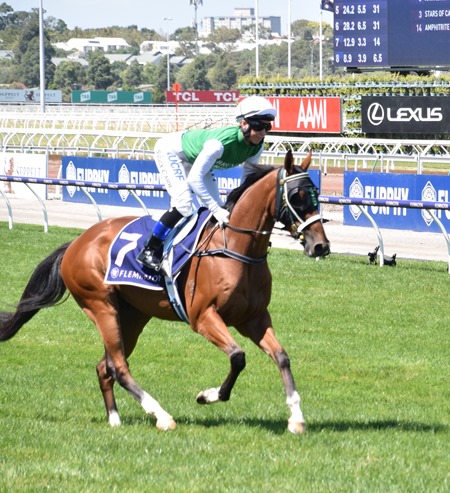 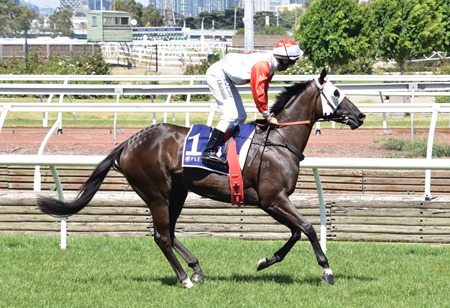 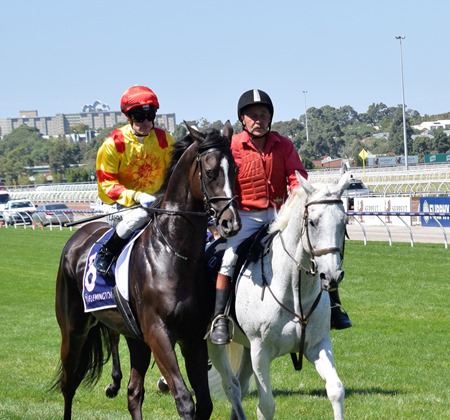 The talented Tasmanian filly had drawn barrier 1, either a blessing or a curse, so Mystic Journey raced close to the speed inside Amphitrite in about fifth place. Hawkshot, who had drawn a wide barrier took the lead shortly after the start and led throughout until Mystic Journey broke through close to the finish line to go on and win by over two lengths. Hawkshot held on to finish second ahead of Amphitrite (third) and Ringerdingding (fourth).

Mystic Journey travelled to Melbourne by boat, aboard the Spirit of Tasmania, the ferry that crosses Bass Strait from Devonport to Melboune.

A former ferry across the Bass Strait was the Princess of Tasmania which operated from 1959 to 1972, hence the title of this post. I travelled on it in 1971 with my boyfriend of the time and remember the adventures we had hitchhiking from Devonport to Hobart, then up the East Coast on the return journey.

We’ll next see Mystic Journey in the All Star Mile on 16 March at Flemington. She was chosen as one of the wild card entries yesterday along with Hawkshot and Hartnell. She is building up an impressive picket fence having won her last six races.

The last race on the card was the Group 3 Frances Tressady Stakes,  an interesting race for fillies and mares over 1400 metres.

As the afternoon was still young I stayed for it and tarried another ten minutes at the track to watch the Chipping Norton Stakes on the big screen. 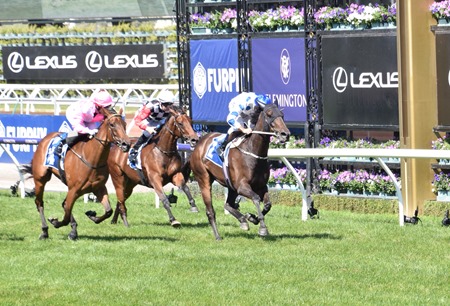 Approaching the finishing post in the Frances Tressady Stakes 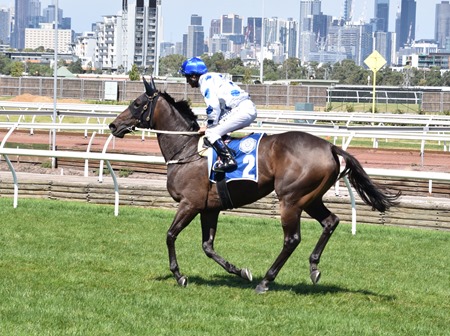 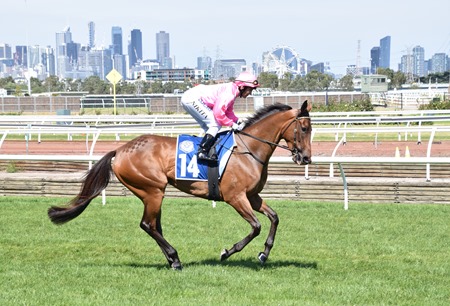 Clarice Cliffs on her way to the barriers 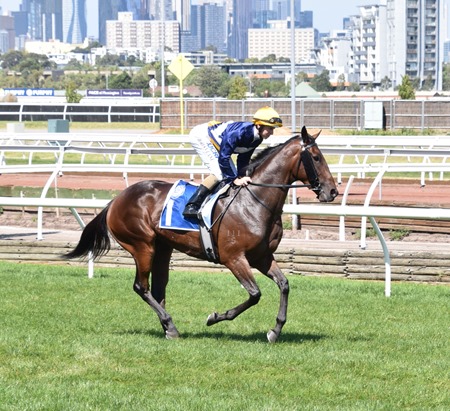 Aristia on her way to the barriers

What more can be said about Winx other than a quote from the Bard:

Age cannot wither her, nor custom stale her infinite variety.

In the Chipping Norton Stakes, Happy Clapper issued a challenge to the mighty mare, sprinting  away from the start and leading throughout, increasing the distance between himself and Winx by a wider and wider margin.  For a brief moment we all thought she could get beaten. But no, she overtook Happy Clapper close to the finish and won by over a length, setting a new course record into the bargain.

Winx has only two more races to contest before she retires, but she could easily have returned in Spring for another campaign as she appears to be just as good as she ever was.

As mentioned before, Flemington was not crowded at all. The Kid Zone was at the far end of the west lawn and the theme was Enchanted Forest. I didn’t bother going to investigate it, but two stilt walkers dressed as ladybirds stalked around the public lawn at intervals.

When they saw me focussing my camera on them, they adopted the following pose. They must have been boiling in their costumes! 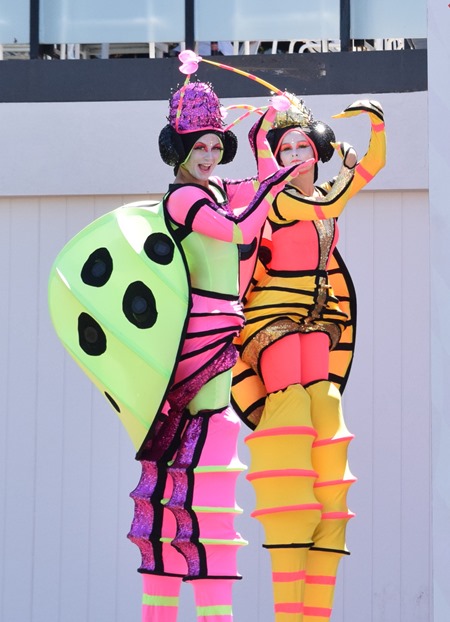 Next week is Super Saturday, again at Flemington, featuring the Group 1 Australian Cup and Newmarket Handicap.

I’m looking forward to seeing Sunlight again, who is running in the Newmarket, and keen to get a glimpse of 2017 Melbourne Cup winner Rekindling in the Australian Cup.