A Timely win in the Black Caviar Lightning & Winx Big 30 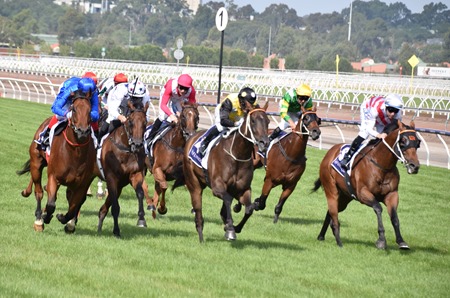 Approaching the finishing post in the Black Caviar Lightning

When I got on the bus to go to Clifton Hill railway station, a couple of fractious passengers were bristling with aggro over nothing much and looked as if they could get into fisticuffs. The driver threatened to throw them off the bus, so they settled down, thank goodness, and the rest of the journey passed without incident.

At Flemington all was peace, love, happiness and Woodstock Nation, a festive atmosphere typical of race meetings, where even children are catered for with various fun activities.

I arrived at the track at around 1.30pm and managed to get my step past the gates, as there was no security check point at the Railway entrance, though my friend George had to resort to subterfuge to get his ladder through security at the car park entrance.

The contestants for Race 3 were parading in the mounting yard, but after hiding my step behind the rose bushes near my favourite spot just past the finishing post, I headed to the stalls area to see who had arrived and gave that race a miss.

Living Legends Apache Cat and Silent Witness were the special equine guests for the meeting and were being pampered in their stalls. 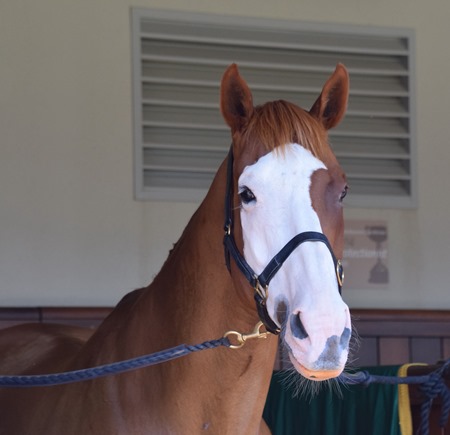 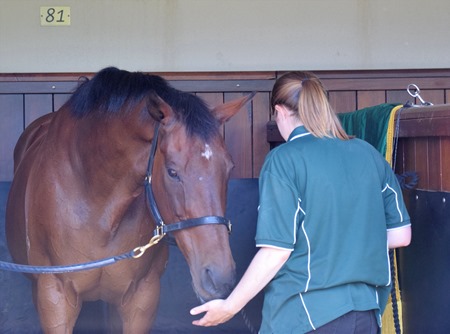 I was particularly interested in seeing More Sundays, a son of the wonderful mare More Joyous sired by Fastnet Rock. 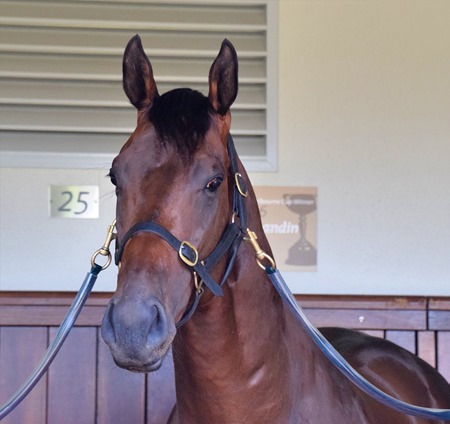 More Sundays has only had three starts for one win, and so far has hardly lived up to his illustrious breeding.

Sunlight arrived whilst I was in the stalls area, so I grabbed a photo of her in her stall. 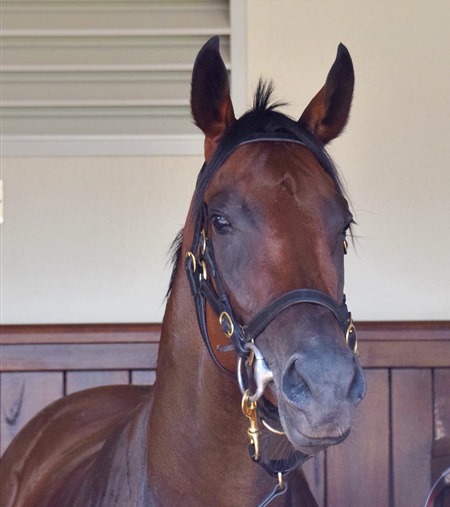 As the next race was yet another Blue Diamond build up race, the Talindert Stakes, named for the property where famous steeplechaser Crisp was born, and owned by Sir Chester Manifold, I headed back to my spot on the access gate to photograph the race and pretty well stayed there for the rest of the afternoon.

Microphone, last seen running second to I Am Immortal in the Blue Diamond Preview, was the starting favourite for the Talindert, and he delivered in spades, winning by over two lengths from Talented and Charleise. 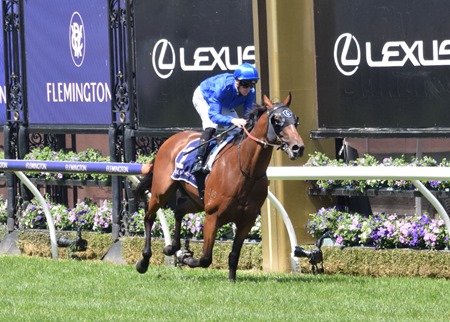 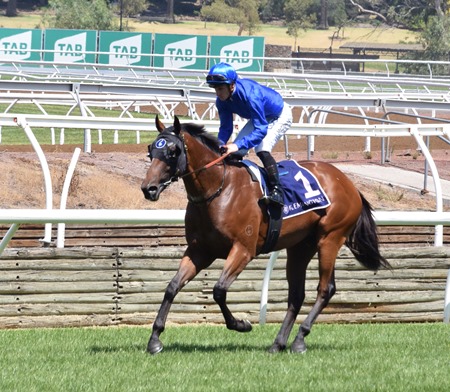 As you can see the light was perfect for taking photos. It was a warm sunny day but not exceptionally hot.

Race 5 was the Group 3 Vanity Stakes,  a race for three year old fillies over 1400 metres.

The result struck me as a natural trifecta, not that I had any money on the race.

Vanity finish – Amphitrite is outside Fundamentalist with Verry Elleegant behind 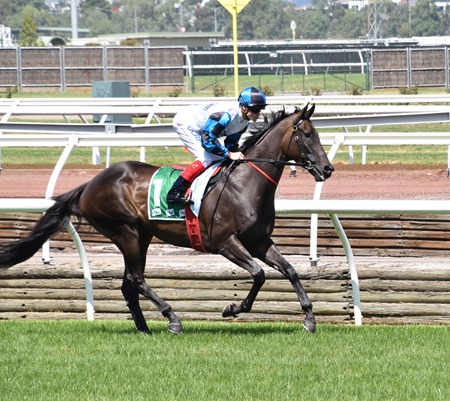 Amphitrite on her way to the barriers 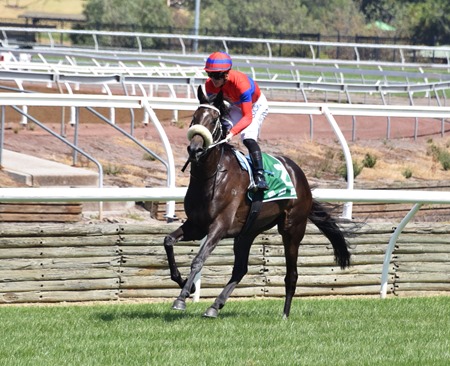 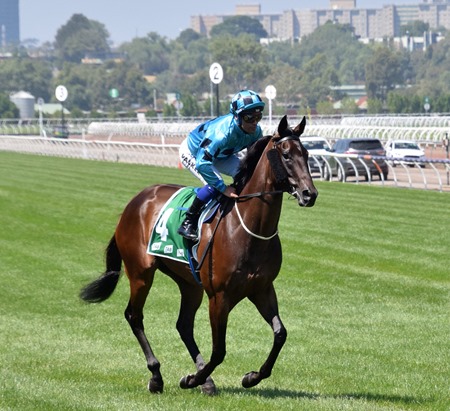 Fundamentalist on her way to the barriers

The handy thing about the step is that you can sit on it in between races, and this I did, mildly amused by the Sumo wrestling activity near the access gate. Yes, I was in the Kids Zone and the theme was Chinese New Year.

The sumo wrestling involved kids donning cumbersome sumo suits and facing off against each other. The kid who managed to topple its opponent and hold them down for the count of five, was the victor. 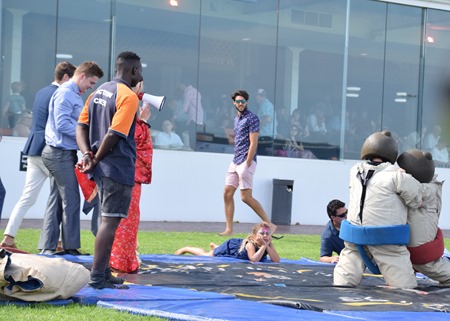 Race 6 was the not terribly interesting Hong Kong Jockey’s Club Trophy, an open race over 1600 metres.

Heptagon was the pre race favourite, but he ended out of a place in fourth. The race was won by 10/1 shot Thunder Cloud from Antah and Mr Money Bags. 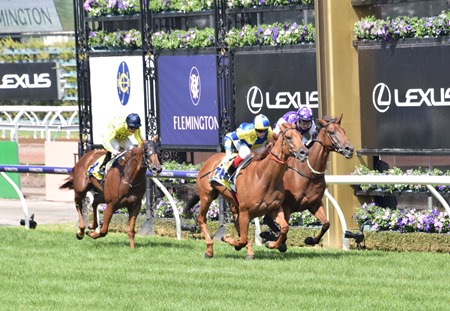 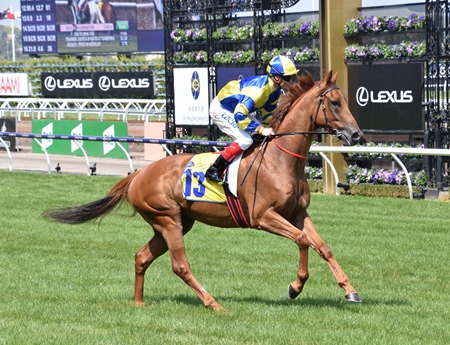 Thunder Cloud on his way to the barriers 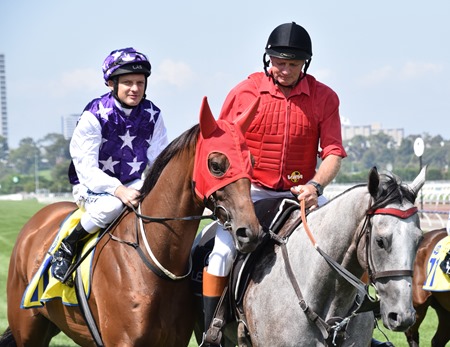 Antah on his way to the barriers By the time race 6 was run and won, there was a quarter of an hour until Winx’s first race of the season was set to run, so stowing my step behind the rose bushes, I headed closer to the big screen to watch the Apollo Stakes.

Randwick appeared to be packed with Winx fans, and a familar cheer greeted her as she moved onto the track. The race was like many that we have seen before with Winx running mid field, one off the inside rail. Of course she cruised to the front shortly after the field turned into the straight and went on to win her 30th consecutive race effortlessly and in doing so broke the course record. Happy Clapper ran second and Winx’s stablemate Egg Tart filled third place.

Watching the race on the Flemington public lawn with several other interested observers we cheered her to the post as if we were at Randwick in person.

Back in Spring I witnessed Tasmanian filly Mystic Journey win two races in impressive fashion and the C S Hayes Stakes resulted in a win by a fellow Tasmanian, The Inevitable, at big odds.

What do they put in the water?

Only a little fellow like his sire Dundeel, The Inevitable fought out the finish with New Zealand bred Age of Chivalry with O’tauto running third two lengths in arrears. 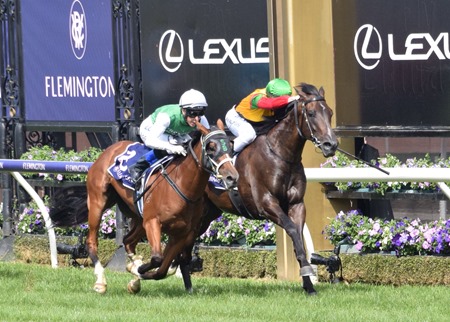 The Inevitable and Age of Chivalry cross the finish line together 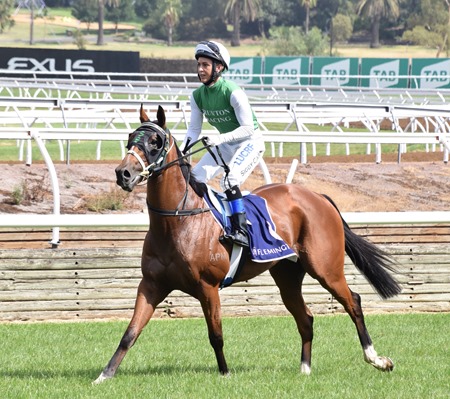 The Inevitable returns to scale 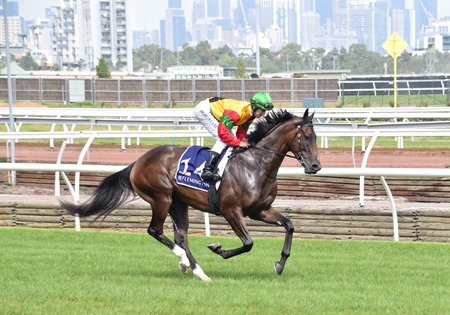 Age of Chivalry on his way to the barriers 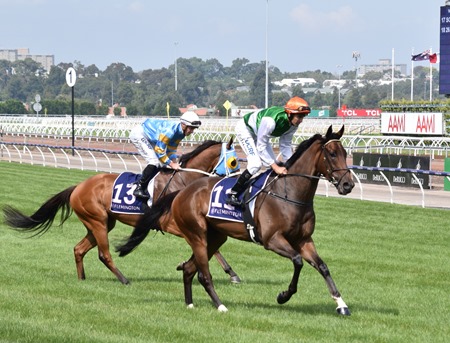 O’tauto on his way to the barriers

The Inevitable’s next race is the Group 1 Australian Guineas on 2 March, where he will be up against the classy Mystic Journey, who has had two starts for two wins in her own State so far this autumn.

The feature Group 1 Black Caviar Lightning was up next and fortunately the runners raced in a bunch down the centre of the track. Sunlight briefly hit the front at 300 mark but was overtaken by In Her Time and Osborne Bulls. She hung on to run third, less than a length from the first two home. 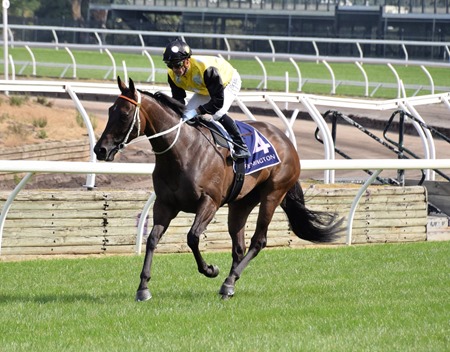 In Her Time returns to scale 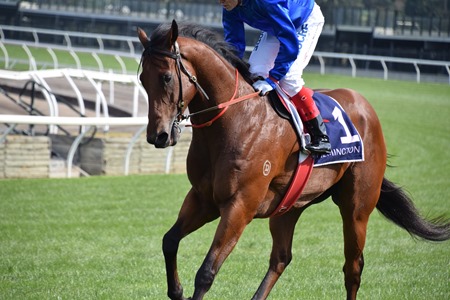 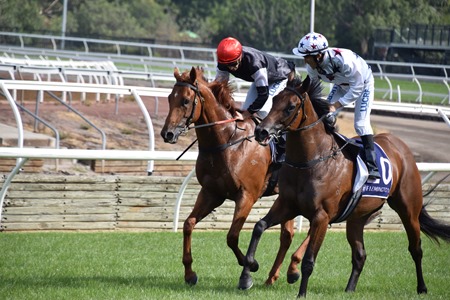 Sunlight returns to scale with Written By

I headed for the station after the Black Caviar Lightning and made it home, one and a half hours later.