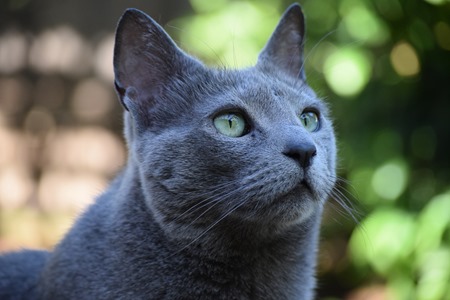 I did anticipate that my next post would be of a more cheerful nature, but on this cold and wet – and totally appropriate – day, there is sad news to impart.

Talya, the Russian Princess has gone from our lives, though her ghost lingers on in the house as a missing thing you expect to see at any given moment.

It all happened very suddenly and was totally unexpected and shocking.

On Wednesday evening she was galloping around like a kitten, playing with a leaf out on the back decking, then at around 7.40 pm she suddenly began to scream in a most distressing way.

B was reading in bed and Talya was on her bed, at the time a footstool covered with her blanket in the bedroom, when she got off it and lay on her side and started howling. She shat herself and then staggered under the bed to vomit.

Understandably we freaked out, and hastily rang the local vet, who thankfully was still open. We had her at the Veterinary surgery by 8.00 pm and she was in a bad way, panting and drooling and very distressed.

After a brief examination and a basic ultra sound the Vet concluded that there was an internal  problem with her stomach, which was causing her extreme pain. He gave her a shot of methadone for the pain and recommended we take her to CARE (Centre for Animal Referral and Emergency),  the 24 hour Vet in Collingwood for further examination and 24 hour observation and care.

CARE kept her overnight and into the next day for a thorough examination including a more complex ultrasound.  She was in no pain as they’d kept the pain killing medicine topped up. They rang us mid afternoon with the results, which showed severe problems with her stomach and kidneys. They offered surgery, stressing that it was invasive and risky. We decided that the kindest outcome would be euthanasia, and that we wanted to be present when it was done.

So we went back to CARE yesterday afternoon and were with Talya when she died.  Whether she registered our presence, being drugged and tranquilised to the eyeballs, I don’t know, but I’m glad we had a chance to say goodbye.

You would be right to assume that CARE was not cheap, but you do not jib at the price when your beloved animal friends are suffering.

So the Cat Politics domicile is in mourning, and even Bingo seems affected being quite clingy and needy and craving our company. He also seems to be looking for her, checking out by habit her normal eating place in case there’s food left in her bowl.

Talya was only nine and a half years old, which seems a short life  these days where cats can live up to 20 years with the wonders of modern veterinary treatment extending the life spans of companion animals by many years.

We adopted Talya from a Northcote neighbour in January 2013 as she was away too often to look after her, and she was a pleasant sweet natured animal to own, though didn’t get along very well with our former cat Willy or Bingo who often gave her a hard time with his antics.

In contrast to Bingo who is extraverted, noisy and attention seeking, Talya was quiet, unobtrusive and well behaved and only imposed herself when she was hungry, though was an anxious creature who would have preferred to be the only cat.

She was a pleasure to know over the five years we had her as a fellow inhabitant of our house and will be sadly missed.

Oh, I'm so sorry to hear this Anne - as you say, that's very young - but things can happen anytime to animals or humans. It sounds like you made the right decision. I think tricky surgery with presumably tricky recovery - if they survive - is tough on an animal who can't understand the process.

Anyhow, thanks for sharing, because I've enjoyed your cat posts and like to know what happens to them. She was a very pretty cat.

Thanks for your kind comments Mrs Gums. Yes, I think we made the right decision regarding Talya, considering the ongoing distress we endured for a month with our old boy Willy, we were unwilling to face nursing an extremely sick cat again. And I don't think Talya would have survived the surgery as there was too much amiss with her innards.