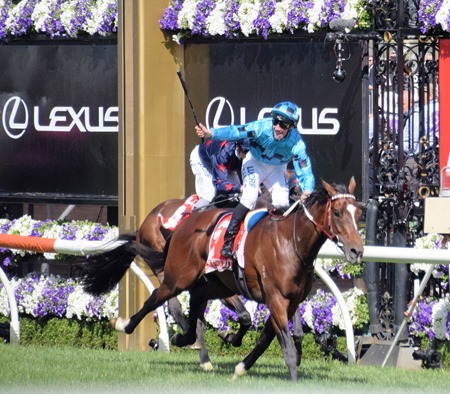 The title of this post aptly describes the atmosphere at Flemington racecourse on Derby Day last Saturday, with the Spring racing crowds out in force,  and champagne being the alcohol of choice of the young ladies on the public lawn.

As for sunlight, there was plenty of it as the weather gods put on a perfect Spring day for the occasion.

Coincidently, the winners of two of the feature races were Sunlight (Coolmore Stud Stakes) and Extra Brut (Victoria  Derby), thus giving me the perfect title for this Derby Day review.

I reached Flemington around 1.20 pm, and wading through the massive crowd I proceeded first to the Stalls area, to try and accomplish my main mission of the day, which was to get Chris Waller’s signature on my Cox Plate Racebook. I’d also purchased the newly released Winx biography by Andrew Rule, so lugged it along as well in the hope of getting it signed.

Chris Waller had a big team of horses competing last Saturday, so he was sure to around somewhere, most likely in the stalls, saddling up one of his runners. He had one horse competing in Race 4 the Group 3 Lexus Stakes, a race over 2500 metres for stayers and also a last chance for horses gaining ballot free entry into the Melbourne Cup. Chris Waller’s candidate was Brimham Rocks, but he just missed, beaten half a length by the British trained A Prince of Arran.

I watched the race on a small screen in the stalls area, and lingered there in anticipation of Chris Waller turning up to saddle his two Coolmore Stud Stakes runners, Zousain and Lean Mean Machine, who were being walked in parade ring. 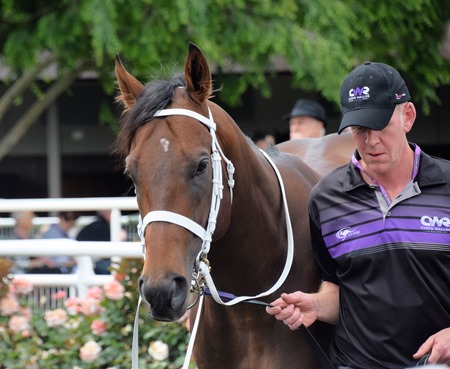 Zousain – said to be the spitting image of his sire Zoustar 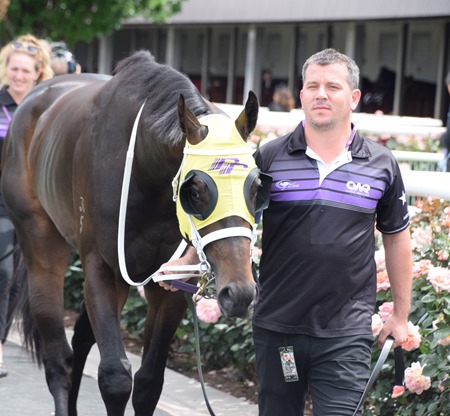 Sure enough Chris Waller turned up eventually and obligingly signed my racebook and the book. He’s got used to me and Rebecca cadging his signature and is too nice to turn us down.

Having accomplished my main mission, I returned laboriously through the throng to my usual spot at the acccess gate on the public lawn and basically stayed there the rest of the afternoon.

As the Flemington inner rail level has be raised it’s very difficult to get rail free shots and added to that, during the big days of the Flemington Racing Carnival, security guards place themselves directly in front of the rail. It makes taking photos very challenging. I should have taken my step stool, which would have surmounted the rail problem, but with the Winx book weighing a ton, I didn’t feel like adding the extra baggage, so left it at home.

The Group 1 Coolmore Stud Stakes is a race for three year olds over 1200 metres and is usually won by a top class colt, who is assured of a lucrative future at stud. However, this year’s field had one filly, the super smart Sunlight, who outclassed her male rivals to win on the line. Zousain finished second and his stablemate Lean Mean Machine third. Race favourite Written By ran fourth.  Interestingly, the first three home were sired by Zoustar, who won the race in 2013, as did his sire, Northern Meteor, in 2008, and grandsire, Encosta De Lago, in 1996.

Sunlight had a torrid run in the Manikato Stakes where she was badly held up and hampered from go to whoa and finished out of a place for the first time in her career, so she thoroughly deserved her first Group 1 victory. 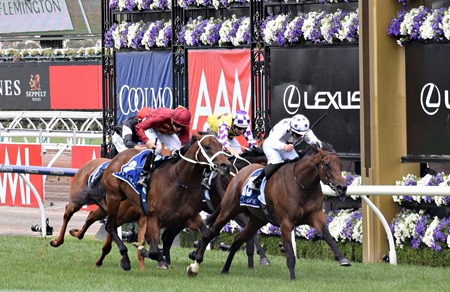 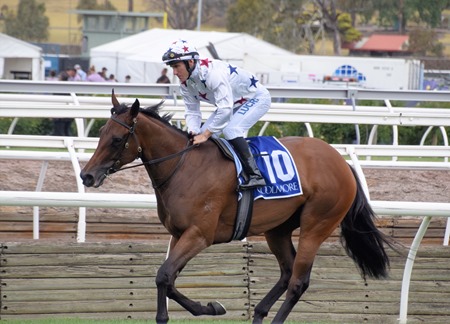 The Coolmore Stud Stakes was the first of the four Group 1 races on the card, and next up was the Empire Rose Stakes (formerly known as the Myer Classic), a race for fillies and mares over 1600 metres.  Chris Waller would have been disappointed that neither of his colts won the Coolmore, but he would have been heartened by his sturdy mare Shillelagh, who won Group 1 glory in the Empire Rose, courtesy of a great ride by James McDonald, who wove her through the field to win by over a length from Bring Me Roses and Fundamentalist. 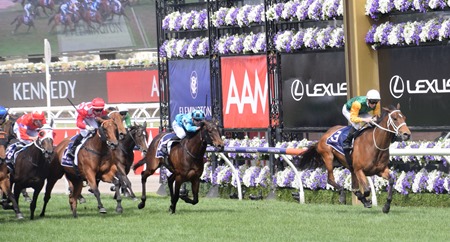 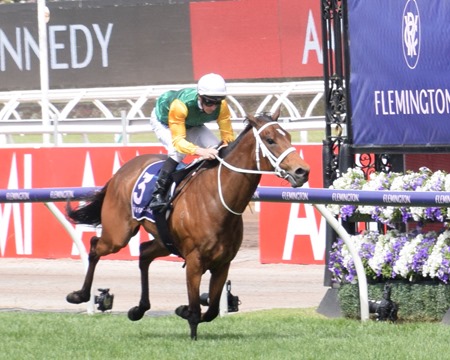 The Gai Waterhouse trained Thinkin’ Big was the firm favourite for the Victoria Derby, but he overraced in the early stages of the race and finished unplaced.  The winner, Extra Brut, raced at the tail of the field and came wide down the outside to overtake the leaders and go on to score by a length over Stars of Carrum, with Chapada another length beind running third.

I only managed to get one photo of the finish (first photo above) as a security guy effectively blocked my view. Fortunately the photo captured the jockey’s triumphant gesture on winning. 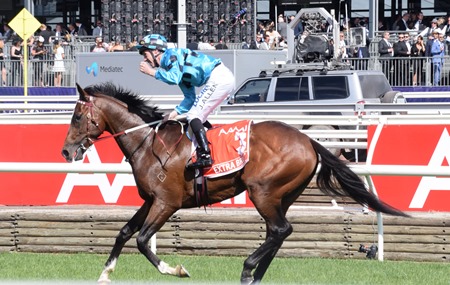 Extra Brut returns to scale after winning the 2018 Victoria Derby

As had been the pattern all day, very few favourites managed to win, and such was the case with the final Group 1 race, the Kennedy Mile, where the favourite Land of Plenty ended up unplaced, and the unfancied British import  Best of Days, last seen dead heating with Mask of Time in the Coongy Cup on Caulfield Cup Day, romped home to win narrowly  over Le Romain and Peaceful State. 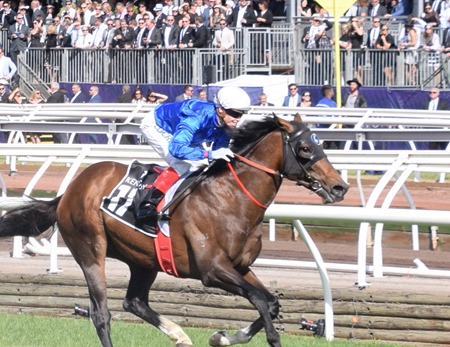 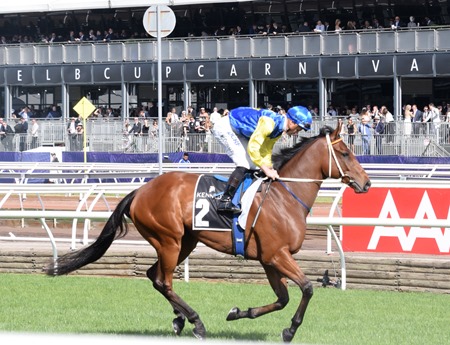 Le Romain on his way to the barriers 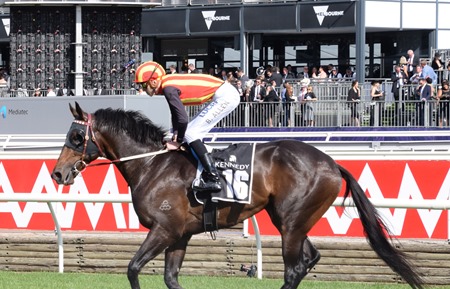 I did not stay for the final race, heading for the station and home after the Kennedy Mile. It had been an interesting afternoon of racing, though a bit of an anti climax after the excitement of Cox Plate day

I’ve been writing this post over three days, and didn’t have time to post my normal Melbourne Cup thoughts.

As I type, the Cup is a hour from  the start and will be run on a heavy track after buckets of rain fell on Melbourne this morning, though it has cleared up now.  Who knows who will win, but it should be an interesting race.

The final day of the Melbourne Raciing Carnival is next Saturday at Flemington which I hope to attend as it’s generally a pleasant meeting and a last chance to see the equine stars before the autumn racing season kicks off in late January.