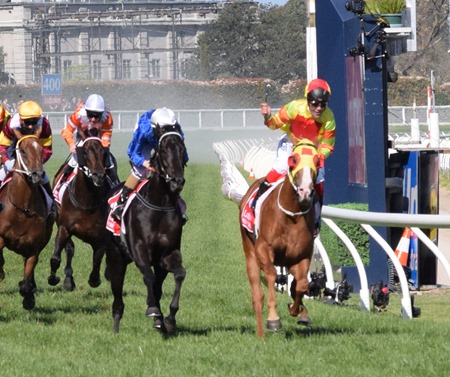 With fine and sunny weather forecast for Saturday, the Caulfield Guineas meeting promises to be a sterling afternoon of first class racing with four Group 1 races and a strong support card.

It’s going to be a very long day with the races run at 35 minute intervals early in the day, but longer intervals of up to 50 minutes from Race 7 to Race 9, to accommodate coverage of The Everest in Sydney.

I normally would take my time getting to Caulfield on Guineas Day but this year I’m keen to get a look at an unusual white filly running in the first race. Aptly named Utzon, she is a daughter of The Opera House,  a pure white mare who raced briefly without much success earlier this decade. I mentioned her in a blog post back then.

Exceptionally well bred, being a three quarter sister to Might and Power, The Opera House has produced three white foals and Utzon is the first hit the racetrack. Utzon trialled the other day and showed great promise, winning comfortably after leading throughout.

There is a plethora of quality racehorses performing at Caulfield on Saturday, several of whom I have not seen in the flesh, such as the Chris Waller contingent of D’Argento, Unforgotten and The Autumn Sun, all potential stars who have previously won at Group 1 level.

Then there are the Internationals having their first run on Australian soil, and personal favourites such as golden girl Sunlight who is one of a field of 13 in Race 3, the Group 3 Thoroughbred Club Stakes. Sunlight shares topweight with the talented Enbihaar who was the Blue Diamond Stakes runner up, so it looks a match race between these two fillies.  Others in the picture are Humma Humma and Meryl.

The first of the Group 1 races to run is the Thousand Guineas, the fillies equivalent of the Caulfield Guineas and a stellar field of talented girls will contest the 1600 metre event. Top picks are Smart Melody, Thrillster, Amphitrite, Fiesta and El Dorado Dreaming.

More class is on display in the Group 1 Toorak Handicap, run over 1600 metres as well. Hartnell, the surprise Epsom Handicap winner is top weight and faces stiff competition from the likes of Rupert Clark Stakes winner Jungle Cat, Dollar for Dollar, Land of Plenty and mares I Am A Star, Shillelagh and Noire.

Two high class International race horses, out here for the Cups and Cox Plate, have accepted for the Caulfield Stakes (now called Ladbroke Stakes), these being Benbatl, a Group 1 winner in the UK and Thecliffsofmoher trained by the canny Aiden O’Brian from Ireland.  It will be interesting to see how they fare against the locals – Humidor, Night’s Watch, D’Argento and Unforgotten – and acclimatised imports such as Tosen Basil and Homesman.

The Caulfield Guineas is scheduled to run at 5.15pm as Race 9, but is well worth hanging around for, having attracted an excellent field.  Last year rank outsider Mighty Boss won at 100/1 denying highly fancied Sydney colt Kementari the prize, and this year the top contenders are Sydney colt The Autumn Sun and the locally trained Native Soldier and Leonardo Da Hinchi.  Also in with a chance are the Hawkes trained contender Outrageous, the Mick Price trained Tavisan and sole filly, the ever honest Oohood.

In Sydney, The Everest,  the richest sprint race in the world is run at 4.15pm on a heavy track. There are many chances the best being last year’s winner Redzel, latest sprint sensation Santa Ana Lane, Vega Magic who ran third last year in the race, and speedy mares Viddora and Shoals.