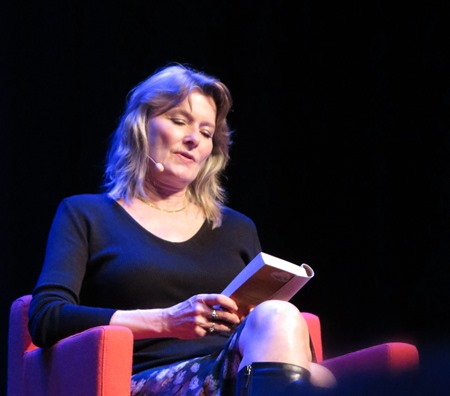 Jennifer Egan at Athenaeum Theatre 8 May 2018

On Tuesday  night I ventured into the city to attend the sole literary event  in which I was interested to see in the Wheeler Centre’s Mayhem Series.

I had read and enjoyed Jennifer Egan’s Pulitzer Prize winning novel A Visit From The Goon Squad back when it was first released in 2010, and acquired her latest novel Manhattan Beach redeeming a gift voucher I received for Christmas.

Though completely different from Goon Squad, being a more conventional novel, Manhattan Beach was an enjoyable read nonetheless.

The event was at the ancient Athenaeum Theatre in Collins Street and pretty well a sell out. When I arrived at around 7.15 pm the theatre was half full, but I managed to get a seat up the front on the aisle in the third row. It turned out to be a handy position for taking photos and also exiting the auditorium after the show so as to get close to the front of the queue for book signings. 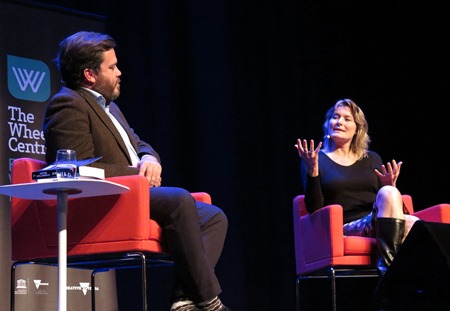 Michael Williams, Director of the Wheeler Centre, chaired the discussion, which mainly covered  the aforementioned novels.

A Visit From The Goon Squad is not a novel as such, but more a collection of interrelated short stories, so it was interesting to hear Jennifer Egan’s account of how she came to write it.

If you have read the book, you would know that the first story features Sasha who has problem with kleptomania, the opening sentence being “It began in the usual way, in the bathroom of the Lassimo Hotel”.

When Jennifer Egan first began Goon Squad, she explained, she had no idea what it would become, her original intention being to write a short story inspired by her own brush with theft (her wallet was stolen and she was scammed in a phone call to reveal her Credit Card pin number)  and her subsequent observation of a wallet carelessly left in the open by a user of the facilities in the lady’s room of a hotel.

Having written the first story, she became intrigued by the character of Sasha’s old boss, Bennie Salazar, whom Sasha casually mentions as having a habit of spraying his armpits with pesticide and sprinkling gold flakes into his coffee. This resulted in a story explaining Bennie’s peculiar habits, and so on, characters in each previous story inspiring another until she had a book – thirteen stories in all.

Manhattan  Beach took many years to write and required a great deal of research. Set during the second world war, the action mostly centred around Brooklyn Navy Yard. Egan said that her first version of the book was awful and that her second version wasn’t much better, adding that this was normally the case when she writes a novel.

The heroine of Manhattan Beach is Anna Kerrigan, daughter of an Irish immigrant, growing up poor in New York. She gets a job in the naval yard and eventually becomes a Navy diver. Of course the novel  is far more complex than that, but the topic of discussion at the Athenaeum concentrated on Jennifer Egan’s research, particularly her first hand experience of trying on a 1940s diving suit.

It was an interesting event and Jennifer Egan came across as charming and articulate. I really must read some of her other novels.

Jennifer Egan’s event is now available to watch  on video at the Wheeler Centre website. 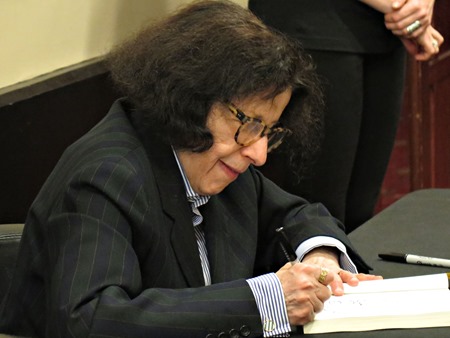 Earlier this year in March I attended another literary event at the Athenaeum Theatre where noted New York bibliophile, wit and social commentator Fran Lebowitz was the star attraction. She was very funny, but as it is a while since the event I can’t remember specific quotes. She was  interviewed by Michael Williams for a short time, then he threw the audience to the wolves by inviting Fran Lebowitz to answer their questions. Some answers were a simple yes or no,  others were more expansive.

I was interested to hear that when looking for a new apartment, the major requirement she needs is enough room to fit her personal library which numbers many thousands of books.

So she struck me as a person after my own heart as I agreed with many of her opinions expressed that night, except her professed lack of interest in technological gadgetry of any kind.

When getting my ancient paperback copy of her book Metropolitan Life signed, she was surprised  to see that it was an edition she hadn’t come across previously, hence the remark about rare book collecting. 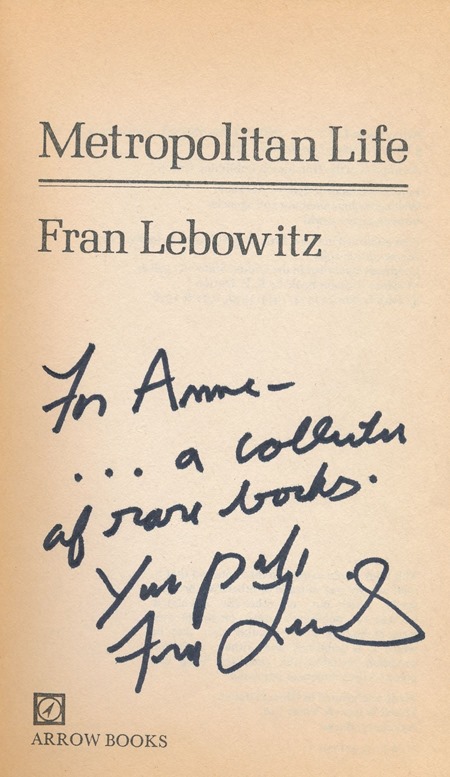 With winter coming and a while to wait until the spring racing season I haven’t much on, other than a concert later this month, where I am going to see the delightful Eilen Jewell at Thornbury Theatre.

Thanks for writing these up Anne. I enjoyed both reports. It's always interesting to hear the genesis of a work isn't it. I must try to read any of her work, not just more of it.

And, how wonderful to have seen Fran Lebowitz. Love the inscription.