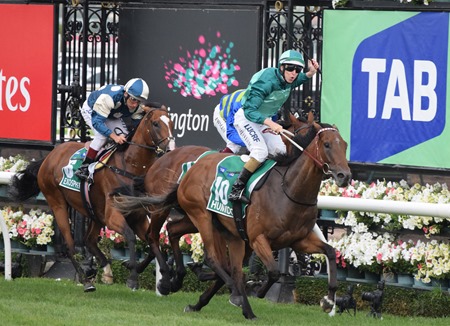 Truth to tell, the Melbourne Summer/Autumn racing carnival has been somewhat underwhelming and tomorrow’s Super Saturday at Flemington promises more of the same.

The feature races are the Group 1  Newmarket Handicap, a sprint over 1200 metres, and the  Group 1 Australian Cup for middle distance runners over 2000 metres.

The Newmarket is the first of the Group 1 events to run and has a large field of 15 runners competing. It’s a mix of tried and true older sprinters and young up and comers.

Best of the younger set is Merchant Navy, Booker and Catchy, all with a weight advantage over their older rivals.

Many great champions of the Australian turf have won the Australian Cup such as Lonhro, Northerly, Makybe Diva, Octagonal and Saintly to name a few, so who will go down in the record books this year?

The 12 strong field is mostly made up of imported stayers such as Hartnell, Almandin., Homesman, The Taj Mahal and Gailo Chop who are the top chances.  Of the few locals it would be nice if the ever reliable Single Gaze got her moment of Group 1 glory. The interesting runner is Japanese import Ambitious having his first start in Australia.

In Sydney, at Randwick the most interesting race of the day is the Group 1 Randwick Guineas, where a crackerjack field of three year old colts and two geldings will be vying for the prize. Kementari who has won his only two starts this autumn is the top pick.  Victorian Derby winner Ace High is also a good chance though is probably better over a longer distance than the 1600 metres of this race. Others worthy of consideration are Golden Rose winner Trapeze Artist and Peaceful State who ran second in the Australian Guineas last week. Peaceful State interestingly is a brother to Weekend Hussler who won the Randwick Guineas, among several other Group 1 races, in 2008.

The weather in Melbourne tomorrow is predicted to be fine and sunny again, so slathered in sunscreen I’ll venture to Flemington tomorrow for another Saturday at the races, maybe the last for a while.