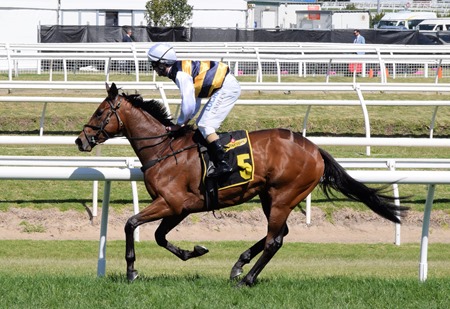 Aloisia – favourite for the Oaks

As we head into the last two days of the Melbourne Spring Racing Carnival at Flemington, it’s timely to preview the Oaks, run tomorrow over 2500 metres, and the Emirates Stakes meeting on Saturday.

Last year the Victorian Oaks was won by 100/1 shot Lasqueti Spirit, who surprised everyone with her tearaway victory, leading from the start to the finish. The year before Jameka zoomed down the straight on a heavy track to win by two lengths.

Prior to winning the Oaks, Jameka beat the boys in the Vase on Cox Plate Day, and current Oaks favourite Aloisia accomplished the same feat this year, and at her prior start won the Group 1 Thousand Guineas.

So Aloisia is understandably the one to beat.

Her main rival is the Gai Waterhouse trained Pinot who won the Ethereal Stakes at her last start and will likely set the pace and take some catching.

The winner of the Wakeful Stakes run on Derby Day often  goes on to win the Oaks, so you can’t really preclude this year’s winner, Luvaluva, from being a serious contender.

Emirate Stakes Day is generally a very pleasant race meeting and not half as crowded as Derby Day, and features two Group 1 events – Darley Classic and Emirates Stakes – as well as several interesting Group 2 and Group 3 races.

I’m really looking forward to seeing the grey flash, Chautauqua again. He was sensationally scratched at the barriers before the Manikato Stakes, so we’ll never know if he would have won it.  The underrated Hey Doc was the victor on that occasion, with In Her Time running second and Malaguerra third.

Chautauqua hasn’t raced in Melbourne since February this year, and will be competing in the Group 1 Darley Classic, a sprint over 1200 metres. He ran second in this race to Delectation in 2015 and hopefully will go one better this year.

A  classy field has been assembled for the Darley Classic and Chautauqua’s main rivals are Everest winner Redzel, Everest runner up Vega Magic and other Group 1 sprinters such as Redkirk Warrior, Malaguerra, Terravista and Manikato Stakes runner up In Her Time.

We’ll finally get to see New Zealand Derby and Rosehill Guineas winner, Gingernuts in Melbourne for the first time in the Group 1 Emirates Stakes. He’s had a delayed start to his spring campaign  due to various setbacks, so it will be interesting to see how he goes in the Emirates Stakes on Saturday.

This year’s edition has a good field of 15 contenders that include BMW winner Happy Clapper, Doncaster winner It’s Somewhat,  Folkswood, and the usual suspects Gailo Chop, Tosen Stardom etc. all vying to get a Group 1 race on their CVs.  But perhaps the older runners will be upstaged again by the three year old Cliff’s Edge with his weight advantage giving him a good chance.

I’ll probably go along to the Oaks tomorrow, but plan to get there later in the afternoon as the feature race is not run until 5.00pm

And I’ll be at Flemington again next Saturday and will also take my time getting there aiming for 1.30 to 2.00 pm, so I’m in plenty of time to watch the Group 3 Queen Elizabeth Stakes.

It will be my last outing to the races for a while.