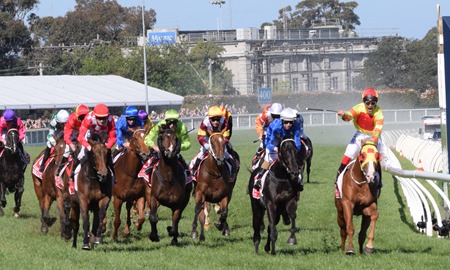 The weather couldn’t have been better for Saturday’s bumper day of racing at Caulfield, but it wasn’t a day for favourites or my particular fancies.

All the feature Group 1 events resulted in long shot winners, but none more astounding than the win of Mighty Boss in the Caulfield Guineas. Being the emergency runner, he only made it into the field after Summer Passage was scratched.

I took my time getting to Caulfield, public transport ensuring that my journey thence was unhurried and I arrived in time for Race 4, the Group 2 Herbert Power Stakes, a race for stayers over 2400 metres. Imported stayer, Lord Fandango, who since arriving in Australia has only raced on country tracks, winning the Benalla Cup at his last start, demonstrated that he could play on the big stage by impressively winning the Herbert Power by a length from Wall Of Fire and Gallic Chieftan. His winning odds were 12/1. 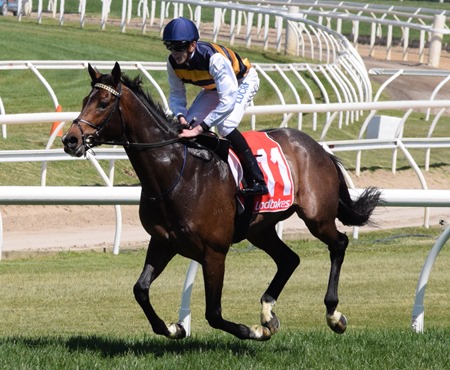 Before and after the Herbert Power Stakes I cruised through the stalls to see who had arrived. 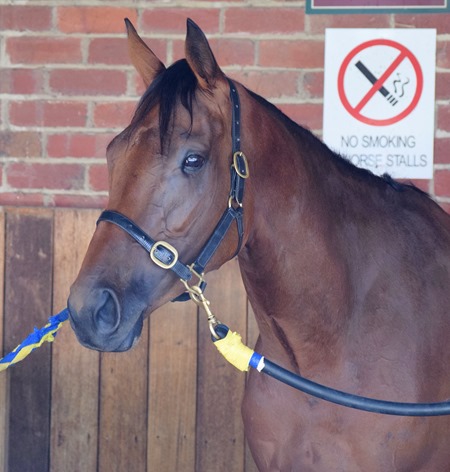 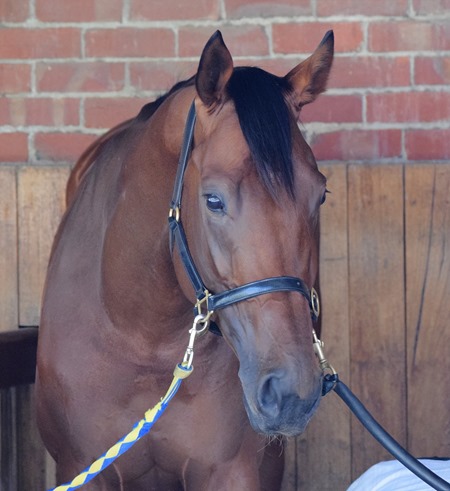 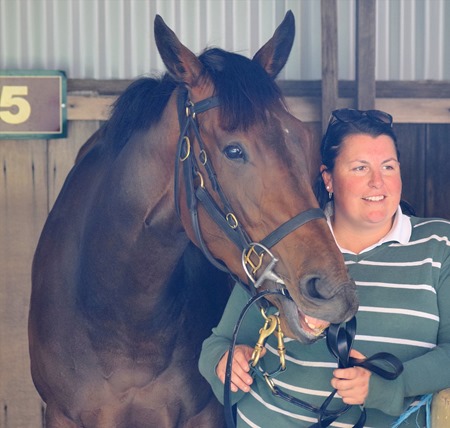 Catchy smiling for the cameras 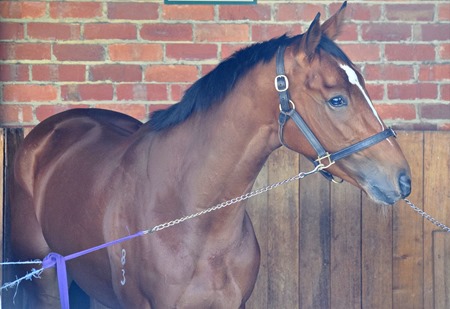 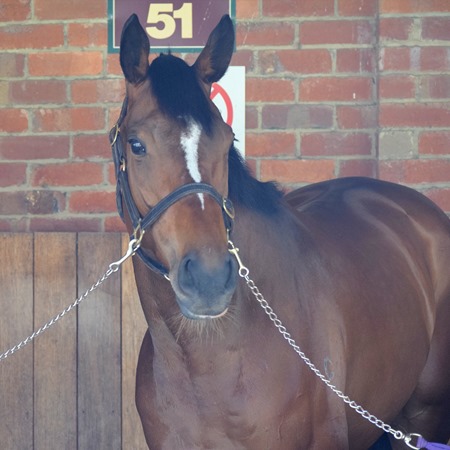 Race 5 was the Listed Weekend Hussler Stakes, a race over 1400 metres. Fast ‘N’ Rocking, who seems to have been around forever, and had not won a race for 2 years, came in at big odds (10/1), narrowly defeating Religify with Dibayani running third.

Just past the post in the Weekend Hussler Stakes 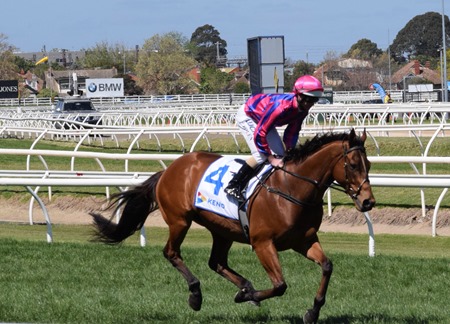 Fast ‘N’ Rocking on his way to the starting gates 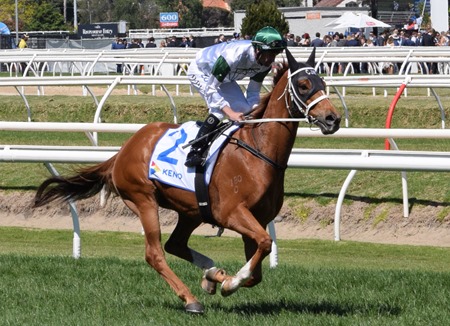 Religify on his way to the barriers 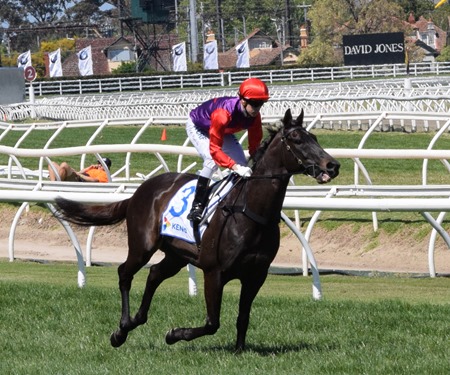 Dibayani on his way to the barriers

The first of the Group 1 events, the Thousand Guineas was next to run, and you guessed it, first and second favourites Alizee and Shoals were upstaged by the unfancied Aloisia who beat Shoals by a 1¼ lengths with Alizee running third another length behind. 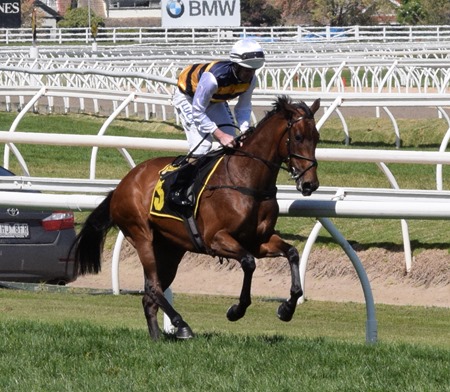 Aloisia on her way to the barriers 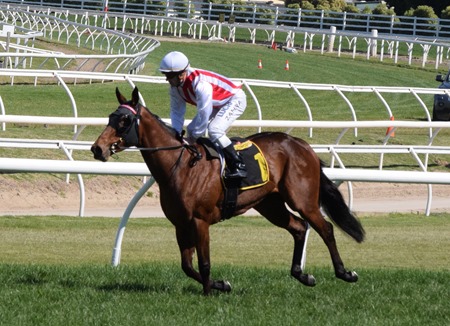 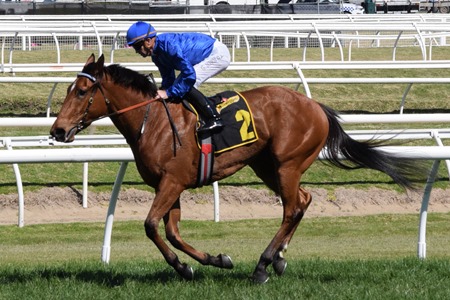 The inside rail was thankfully in its true position, which made it much easier to get good rail free photos, and the light was excellent where I was standing as usual on the hill above the stalls. In between the Thousand Guineas and the Caulfield Stakes I managed to get New Zealand trainer, Murray Baker’s signature against Bonneval’s name in three racebooks (ATC Oaks, Dato Tan & Underwood Stakes), though didn’t want to jinx her on the Guineas Day’s racebook.

Bonneval started as favourite for the Caulfield Stakes, but was obliged to start from the widest barrier which rather limited her chances of racing up with the leaders and her jockey Damian Lane appeared to make little effort to get her closer. She raced at the back of the field for most of the race, then was blocked for run by a wall of horses when it counted, so did well to run sixth. Her stablemate Jon Snow fared better racing on the speed, finishing third. Gailo Chop who led for most of the race held off a fast finishing Johannes Vermeer to win by a neck.

Hartnell who was second favourite seems to have been cursed with P B Lawrence Stakes winner’s hoodoo as he has been beaten ever since he won that race back in August. He finished 9th. 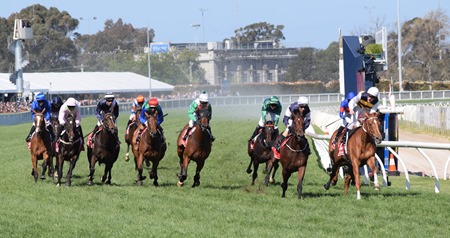 Just past the post in the Caulfield Stakes – Gailo Chop leads 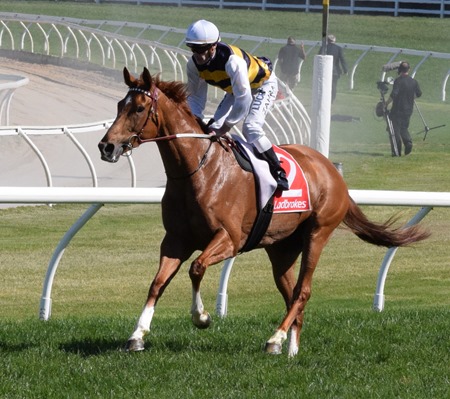 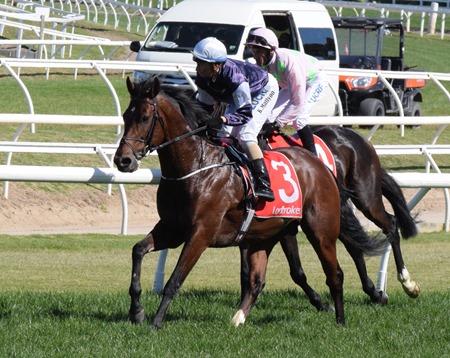 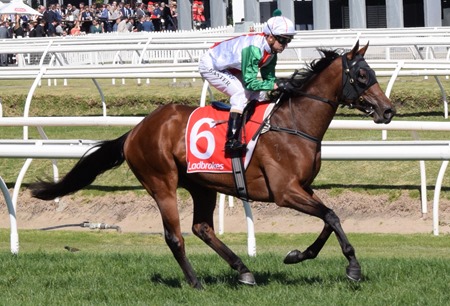 Jon Snow on his way to the barriers 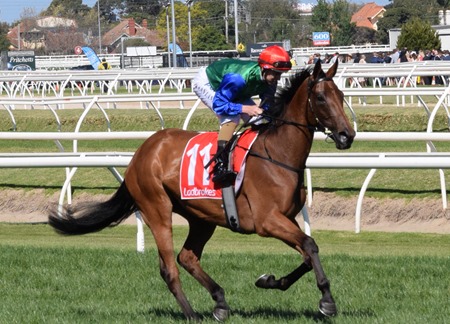 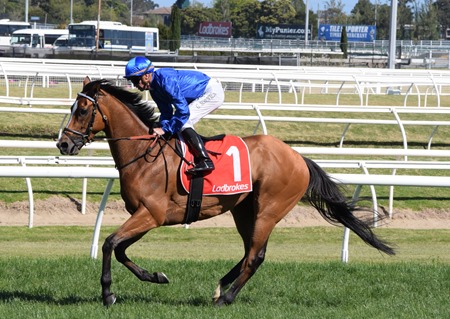 As previously mentioned the Caulfield Guineas result was a boilover, with Mighty Boss, who had only a lowly win at Sale to his credit, winning $1,200,000 at his sixth start.

An unusual looking chestnut colt with blonde mane and tail he paid over $100 for the win.  Kementari finished second with sole filly Catchy running third. Royal Symphony had a torrid run and ended up running forth. His next race is the Cox Plate against Winx (!!) 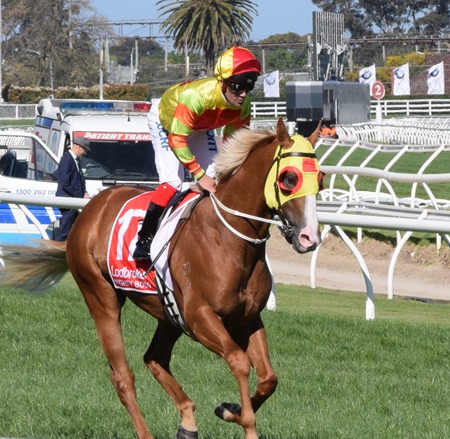 Mighty Boss on his way to the barriers 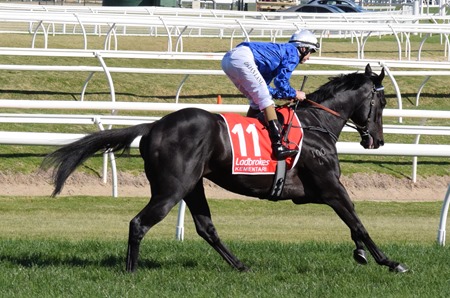 Kementari on his way to the barriers 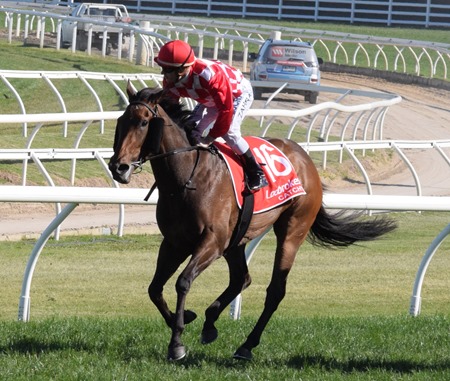 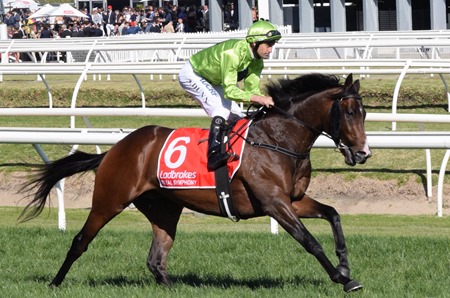 Royal Symphony on his way to the barriers

It was getting on to late afternoon by the time the final Group 1, the Toorak Handicap was set to run.

Egg Tart was the starting favourite, but as was the rule for the day, she finished out of the placings. Tosen Stardom the Japanese import, who since his arrival in Australia last year has not won a race, finally had his moment of glory in his new home, and a Group 1 at that, winning the Toorak Handicap by a length from Sovereign Nation with Petrology a further length behind running third. 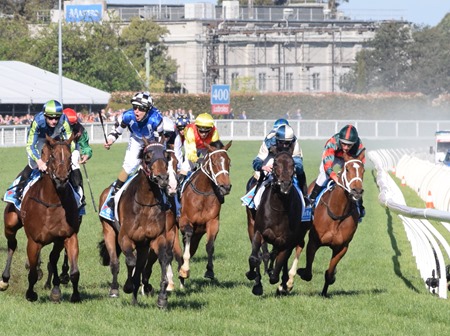 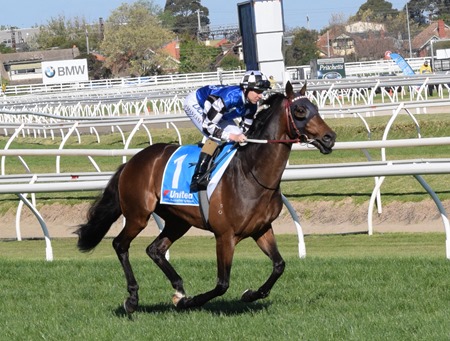 Tosen Stardom on his way to the barriers 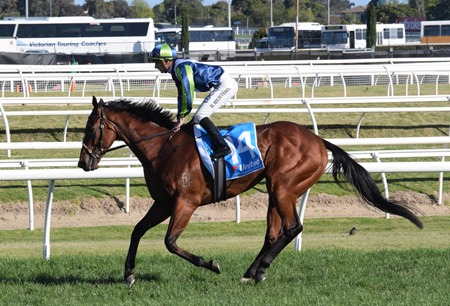 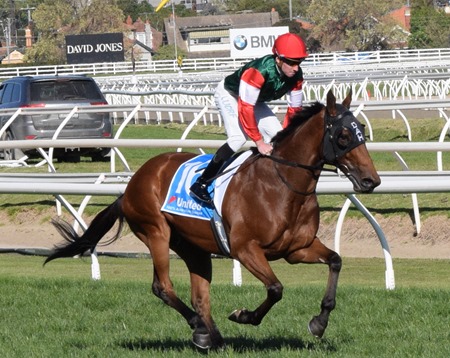 Petrology on his way to the barriers 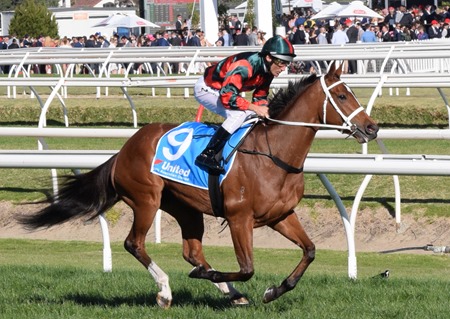 Egg Tart on her way to the barriers

I watched The Everest, which was run before the Caulfield Guineas, on the big screen and duly noted that Redzel won, and that Chautauqua, due to a confused ride by his jockey finished out of a place in fourth. Vega Magic ran second with Brave Smash scoring third place.  She Will Reign finished second last, outclassed by the more seasoned sprinters.

Even though there was one more race to go, the Group 2 Schillaci Stakes with *Lankan Rupee back on the track after a longish layoff, I headed off after the Toorak Handicap, catching an express train at Caulfield and a nicely coinciding connecting train at Parliament, then the bus, and managed to get home in 1¼ hours.

Next Saturday is the Caulfield Cup meeting which looks to have a decent support card as well, so I’ll be back at Caulfield again and hope the stars smile this time on my fancied runners.

* Lankan Rupee failed to run a place in the Scillaci Stakes and has been retired. A beautiful bay gelding with a distinctive heart on his forehead, he was the top sprinter and Australian Horse Of The Year for 2013/2014 and will be missed, though I’m glad his connections have finally ended his racing career. 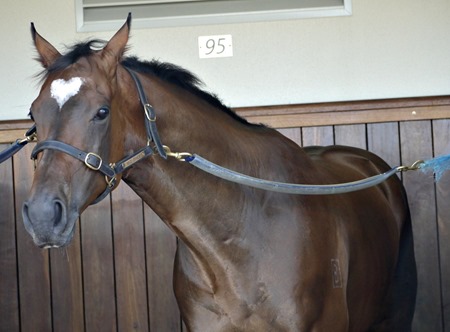