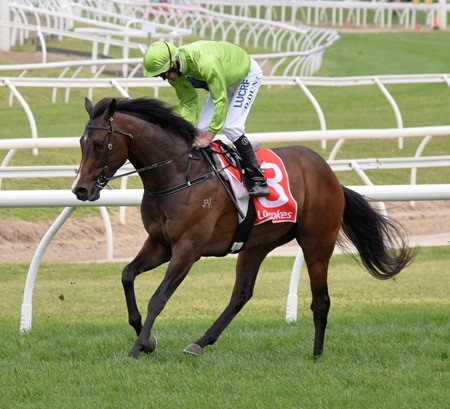 I haven’t previewed a race meeting for awhile, the recent house move intruding on the time I had to scan the form and write about it.

However, the super race meeting at Caulfield this coming Saturday is worth writing about, with the stars of the turf out in force.

It’s only two weeks to the first of the big Cups, the Caulfield Cup, and the Caulfield Guineas meeting is always held the weekend prior, and offers a considerably better race card than on the big Cup day with four Group 1 races,  and several Group 2 and Group 3 races.

The first of the Group 1 races is the fillies Thousand Guineas. It is run over 1600 metres and has been won by some classy girls in the past such as Alinghi,  Miss Finland, Atlantic Jewel, Commanding Jewel ( AJ’s sister) and Guelph (who actually is the dam of one of the debutants – Encryption -  in Race 1 on the program).  Sydney filly Global Glamour won it last year.

Only eight acceptors will contest this year’s edition and another Sydney filly Alizee appears the top pick. She won the Group 2 Tea Rose Stakes and Group 1 Flight Stakes at her last two starts, which is a similar profile to previous Thousand Guineas winners.

Of the local girls, Booker and Shoals are in with a chance, both having recent wins to their credit.

The Group 1 races are scheduled in consecutive order and the Caulfield Stakes (2000 metres) is run 40 minutes after the Thousand Guineas. Last year the Caulfield Stakes was a three horse race between Winx, Black Heart Bart and He Or She who finished in that order. This year, without Winx in the field, there are 11 acceptors. They include the regulars Hartnell, Gailo Chop, Single Gaze, Inference, Jon Snow and Abbey Marie, and the wonderful New Zealand mare Bonneval who beat them all in the Underwood Stakes. Also in the field are several International runners here for the Cups, the Aiden O’Brien trained The Taj Mahal and Johannes Vermeer, and the Willy Mullins trained Riven Light, which makes the race unusually interesting. I’ll be barracking for Bonneval and hope she prevails again.

Catchy, rather than running in the Thousand Guineas against her own sex, will be taking on the boys in the Caulfield Guineas. She’s a big strapping girl who has won against the boys twice in the past and has a 2kg weight advantage to assist her. History is against her however, as the last filly to achieve this was Surround in 1976, who also won the Cox Plate the same year.

Royal Symphony had his colours lowered in his last start where he finished fourth in the Guineas Prelude. I hope that was just a hiccup in his career and that he can resurrect his reputation with a good win in the Caulfield Guineas.

The Toorak Handicap is the final Group 1 race of the day and has a huge field of 18 acceptors. It is run over 1600 metres and the most interesting runner is the Chris Waller trained mare Egg Tart who is making a second  start to her spring racing campaign, having recently suffered from an eye infection that interfered with her preparation. She’s a classy mare who won the Group 1 South Australian Oaks and Queensland Oaks in the autumn. Interestingly her granddam is Born To Be Queen, a talented staying filly of the 1980s that I followed at the time.  Egg Tart will probably start as favourite and her main threat comes from the likes of I Am A Star, Mr Sneaky and Tom Melbourne.

Trying, and probably succeeding, to steal some of Melbourne’s Spring Racing Glory, Sydney  is running the richest race in the world at Randwick on Saturday.  A sprint over 1200 metres the winner takes home a massive $5.800,000 out of the $10 miilion in prize money.  It is called The Everest and has to its credit attracted a very classy field of 12 sprinters that include Chautauqua, Redzel, Vega Magic, Redkirk Warrior, She Will Reign and Houtzen. I kind of hope that the grey flash wins it, but I’d be equally pleased if She Will Reign was the victor. Whatever the result, it is a must watch race.

As the Group 1 races at Caulfield are later in the day, the first to run at 3.15pm, I’m going to take my time getting to the course and won’t be so fretful at all public transport complications still besetting the Hurstbridge train line.

Of course if I was still living in Northcote, none of that would have mattered with other transport options being available.