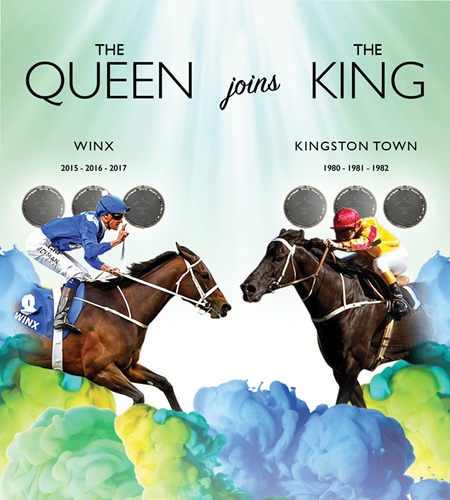 When I arrived at Moonee Valley Racecourse on Saturday shortly after midday it was already crowded with racegoers keen to peg out a claim on the Public Lawn.

My journey for a change was without public transport hiccups, and after purchasing a race book and a Cox Plate Charity Pin, I met up with my fellow photographer friend Rebecca in the Stalls area.

Winx had not yet arrived at the course, so we made our way to the Public Lawn to secure a spot on the fence.  Our first attempt to get close to the finish line was a failure owing to a prior claimant taking poorly to our attempt to hijack their position.

So we moved on after watching Race 2 and found an unclaimed position on an access gate halfway down the straight.  And there we stayed for the rest of the afternoon, and like everyone else on the fence didn’t dare move in case our spot was stolen by someone else. A couple from Adelaide were our adjacent companions for the afternoon, and the bloke remarked that they had to take turns to go get food, drinks etc.

It wasn’t a bad position and at least it was on the fence, even though it meant standing there for over four hours.

Winx colours were everywhere and Winx flags and banners were given out at the entry gate to everyone. 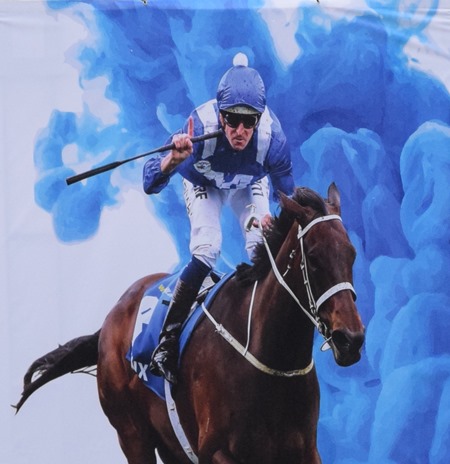 Signage opposite where I was standing

We got plenty of photography practice watching the next six races before the main event. The Cox Plate was scheduled as Race 9, to run at 5.00pm

Race 3 was the Group 3 Telstra Phonewords Stakes, a race for three year olds over 1200 metres.

As has happened frequently during this spring racing season most of the race favourites were rolled by outside chances, and such was the case in Race 3, where Eptimum – whom I’ve never heard of – beat the more favoured Single Bullet by three lengths. Trekking the favourite ended up third over five lengths behind the winner. 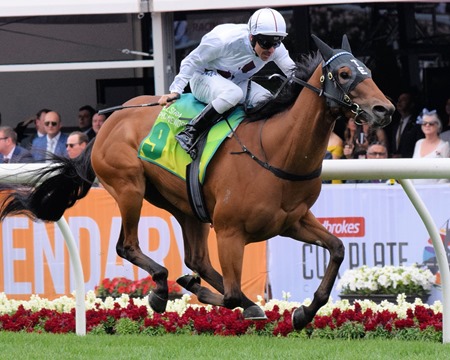 Eptimum on his way to winning the Telstra Phonewords Stakes 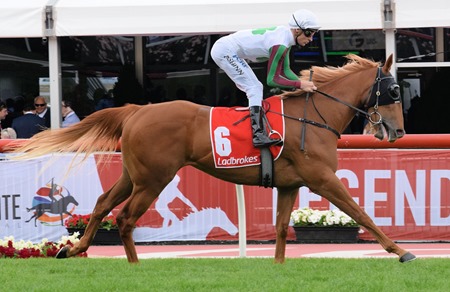 Blondie on her way to the barriers

The favourite for Race 5, the Group 3 Powerflo Solutions Stakes was Invincibella who also ran third, the winner of the race being Lubiton who paid $6.50 for the win, beating Savapinski by over a length.

Lubiton burns up the straight 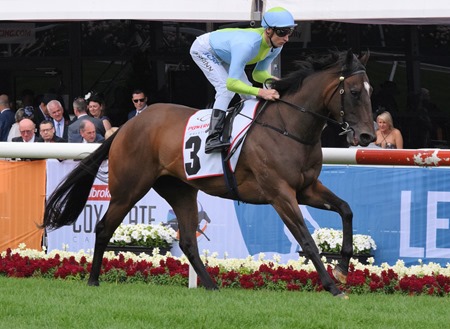 Lubiton on her way to the barriers

Race 6 was the Group 2 Moonee Valley Gold Cup (2500 metres), in the past a quite prestigious race that has been won by various grand stayers, but this year’s field was somewhat ho hum. Big Duke was the starting favourite but he failed to place. Who Shot Thebarman, now nine years of age, finished a narrow second to his stablemate Grand Marshall last year in this race, but this year was the winner. It was his first win in two years. He beat stablemate Libran by half a length and the Gai Waterhouse trained Cismontane finished third.

Moonee Valley Gold Cup down the straight. Who Shot Thebarman (orange silks) is about to overtake Auvrey and leader Cismontane 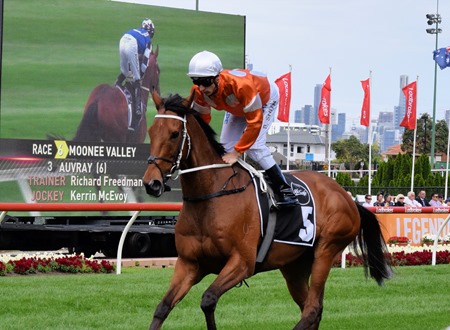 Who Shot Thebarman on his way to the barriers

The weather on Saturday was mostly overcast and mild, though at one time looked as if it would bucket down with rain, which failed to occur. As the afternoon progressed the clouds cleared to sunshine and  was quite hot at times.

In between the races, the big screen played reruns of Cox Plates of the past and the passing of time was not as onerous as you would expect, even when you have stood in the same spot over several hours.

The next two races were the Group 2 Fillies Classic – won by Banish  - and the Crystal Mile, where Lucky Hussler was back in the winners circle after having not won a race for a year. He beat the favourite Religify by three lengths. 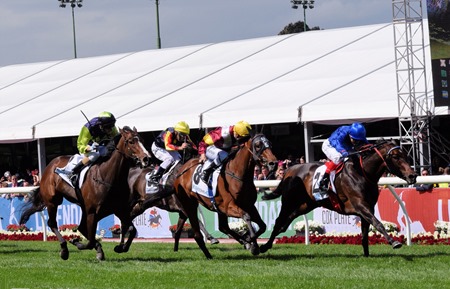 Banish hits the front in the Fillies Classic 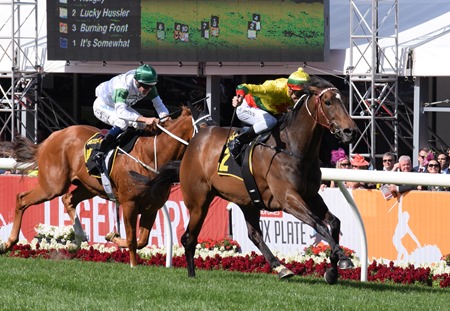 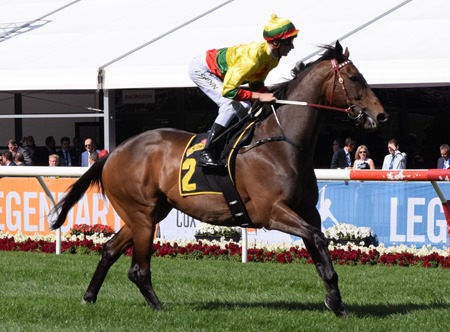 Lucky Hussler on his way to the barriers

After the Crystal Mile there was 40 minutes to wait for the running of the Cox Plate, counted down on the big screen up to race time. 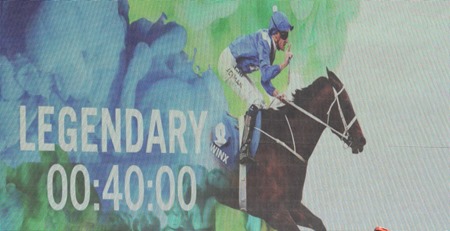 A stage was set up on the track for Daryl Braithwaite’s traditional rendition of “Horses”, and a bunch of track hands laid out a gigantic banner across the track and weighed it down with their bodies.

At 4.30 Daryl Braithwaite climbed on the stage, and after sorting out the sound issues launched into his famous song, eliciting an enthusiatic singalong from the enormous crowd.

The excitement was mounting as Daryl finished and the stage was dismantled. The National Anthem was meant to be sung, but sound issues forced it to be abandoned.

Who cares,  an historical moment was imminent, and that was what we had come to see.

So much for our photography practice. It had been hassle free all afternoon, but all of our fence neighbours drew out their phones as Winx stepped onto the track to a thunderous cheer, in order to get a pic of the star attraction. It was challenging to say the least getting a clear space to focus. Somehow I managed, and got a few good photos of Winx heading to the barriers, and the race itself. 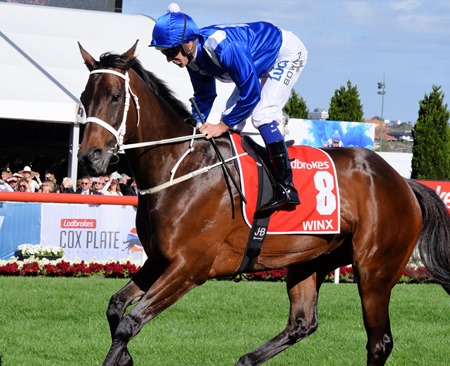 Winx on her way to the starting gates

The race was as breathtaking as expected, with Winx racing three wide throughout, Hugh Bowman astutely keeping her clear from interference. Poor young Royal Symphony was buffetted by the giant Happy Clapper who kept pushing him to the rail. Happy Clapper’s jockey, Damien Oliver was outed for 20 meetings over this incident.

Cox Plate start – Seaburge leads from Gailo Chop & Hardham. Winx is on the outside of Folkswood followed by Happy Clapper outside Royal Symphony. Humidor is behind them on the fence.

As the field approached the turn Hugh Bowman eased Winx to the extreme outside and was whizzing past the leaders at the turn. Winx looked to have it won easy as they flew up the straight… 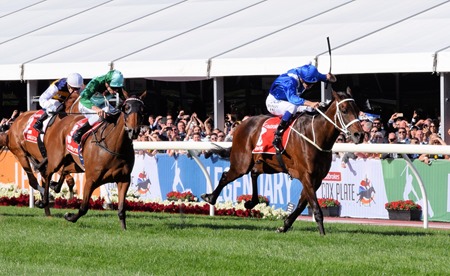 Winx is ahead halfway up the straight

… but Humidor was in hot pursuit and at one stage looked like he would overtake, but Winx toughened it out to the line to record an historic win, and her 22nd in a row at that. A huge cheer erupted to register the star mare’s victory and we could breathe easy again. 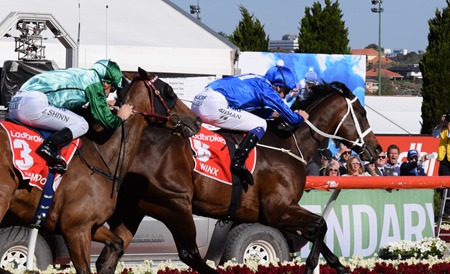 Humidor closes on Winx as they approach the finish line

Winx registered a half length win over Humidor and broke her own track record  that she achieved in her first Cox Plate back in 2015. Folkswood finished third five lengths behind.

As usual Hugh Bowman rode Winx back up the straight before returning to scale, to allow her multitude of fans to celebrate her victory with him. 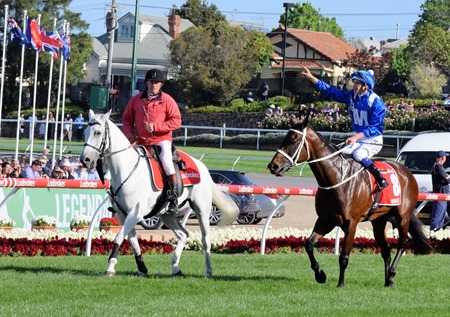 Winx parades up the straight 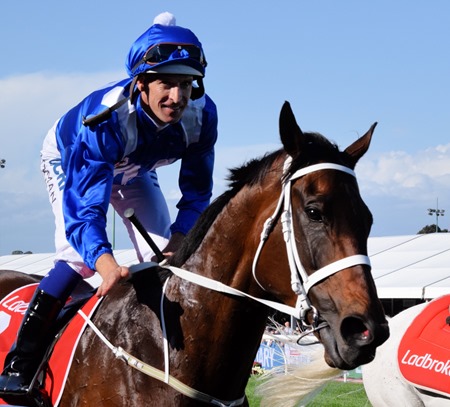 Winx returning back down the straight along the outer rail

The Cox Plate had lived up to expectation, and the result made it worthwhile standing for all those hours to witness the historic moment. Winx has cemented herself into the record books, her brilliance undeniable.

I didn’t stay for the final race, and headed home after a brief visit to the stalls, Stall 54* in particular. Earlier in the afternoon you couldn’t get anywhere near it, with a twenty deep crowd of fans surrounding the stall, but the crowd was only three deep after the Cox Plate, so I got the following final photo for the day, shooting through heads. 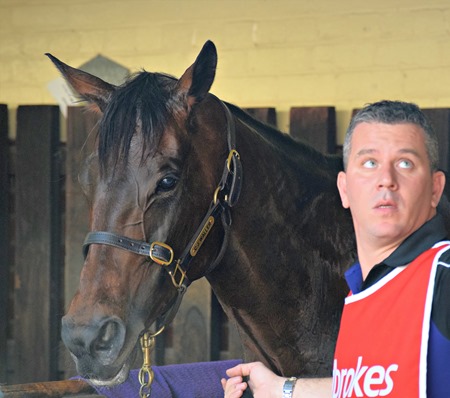 Winx in her stall with devoted  strapper Umut Odemislioglu.

She looks tired here, but by all accounts recovered well, and may yet run another race before the end of Melbourne’s Spring Racing Carnival. I’d love to see her race again in the Emirates Stakes, but won’t be disappointed if she is spelled.

There are only two Saturdays of Group 1 racing left in Melbourne with Flemington staging its Spring Carnival over four days, starting with Derby Day next weekend.