A Day In The Sun Celebrating Winx 21st 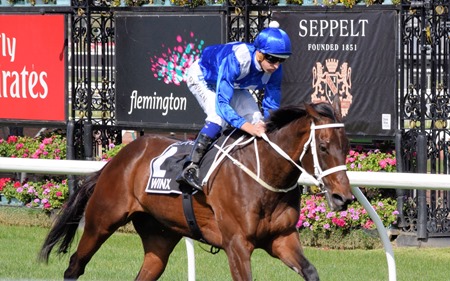 Though the rest of the racecard was pretty ordinary, it was worth getting to Flemington to witness the magic mare Winx win her 21st race in succession. And she accomplished this in spectacular fashion, winning by 6½ lengths.

A lot of other people had the same idea, as twice the number who attended the Turnbull Stakes meeting last year were present for the event. It was quite like the old Black Caviar days, though instead of salmon with black spots,  it was Winx’s blue colours that predominated.  The Merchandise stall were selling Winx caps, stubby holders, vests etc, and throughout the afternoon the promoters were handing out Winx flags for fans to wave.

It took over an hour for me to reach Flemington being obliged to travel by bus to Clifton Hill, then a train to the city, followed by another train to Flemington, but I set out early and reached the course around 1.00pm.

My first stop on arrival was the stalls area to see if Winx was there. Sure enough she was, with a big crowd gathered outside her stall. I managed to wriggle in and got some photos of the super star with her regular strapper Umut Odemislioglu. 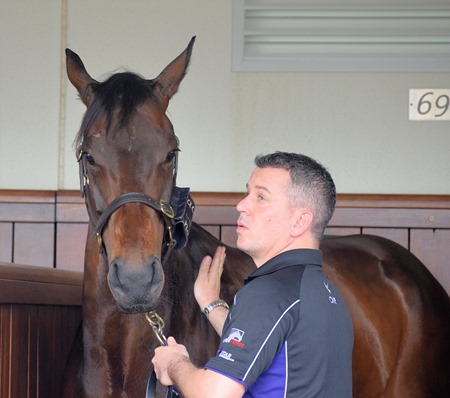 I must admit I did not pay much attention to the other races on the program, but they were handy for photography practice.

Unfortunately the rail was out 9 metres, which as always makes it hard to get clear shots with a high focal length,  the rail cutting off the view as in the first photo above.

My early start meant that I got to Flemington in time for Race 2,  the Poseidon Stakes, a 1400 metres race for three year olds. It was won by long shot Snitzepeg from Brave Tango and Sircconi. 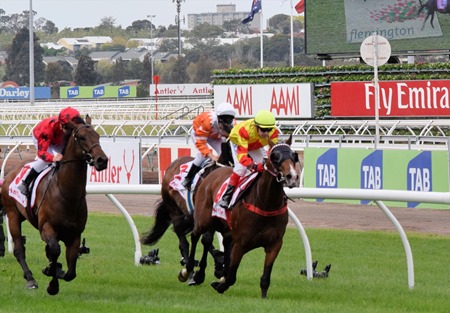 Poseidon Stakes - down the straight to the finish line, Snitzepeg leads 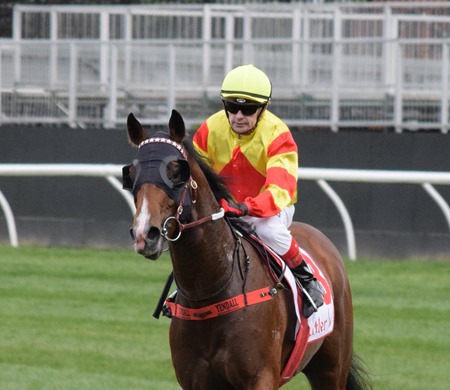 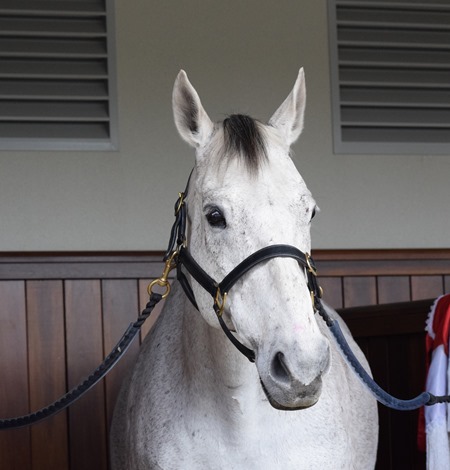 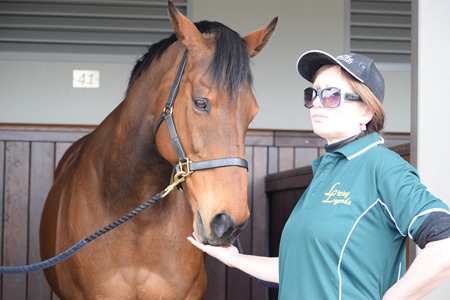 At Saintly Place, one of the public precincts of Flemington, there was a display of Bart Cummings trophies, open for the first time last Saturday. There are 149 trophies in all that include his Melbourne Cup and Cox Plate wins. 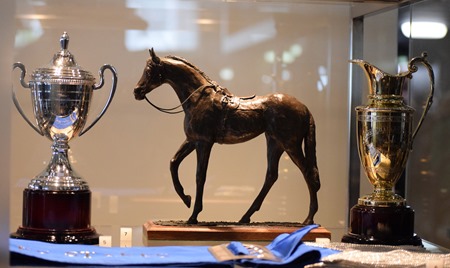 A small part of the Bart Cummings Trophy display

Back trackside Race 3, the UCI Stakes was set to run.

Another race for three year olds, this one was over 1800 metres, it was won by the unfancied Main Stage by a neck from Cliff’s Edge with outsider Johnny Viko running third. 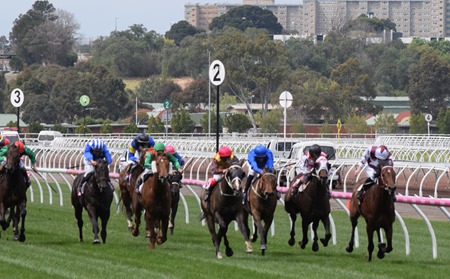 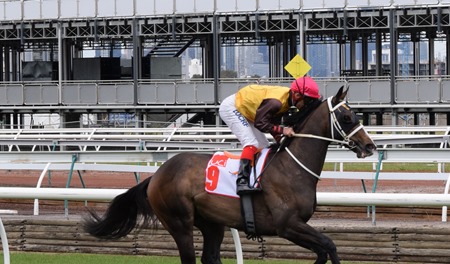 Main Stage on his way to the barriers

As the Turnbull Stakes was scheduled as Race 5, my friend Rebecca and I  decided to stay put after Race 4, the Group 2 Gilgai Stakes, so we wouldn’t lose our spot at the access gate just past the finishing post.

The Gilgai Stakes favourite was Spieth who disappointed finishing second last.  Keen Array, who seems to have been around forever and hasn’t won a race for year, narrowly won from Queensland mare Sold For Song  and outsider Malibu Style. The trifecta must have paid a fortune. 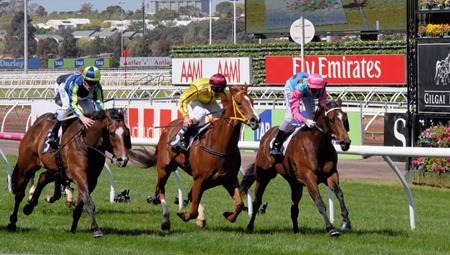 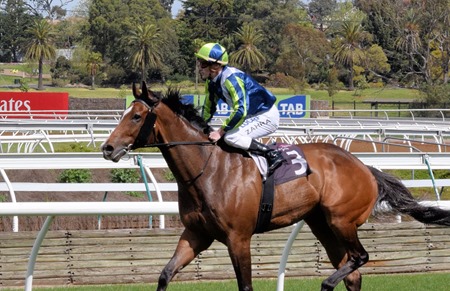 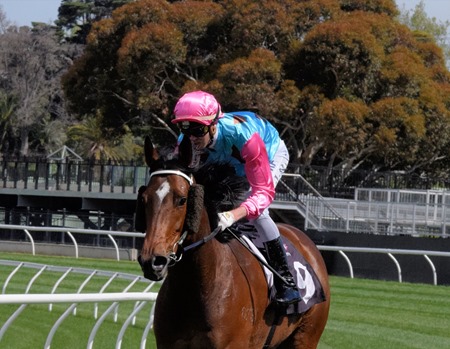 Sold For Song returns to scale

The excitement was building as the time ticked by to the Turnbull Stakes and everyone jostled for position on the fence to see the great mare in action.

I saw two ravens (for joy) fly over the track, and one settled itself atop the finishing post – an heraldic raven on the ornate structure. 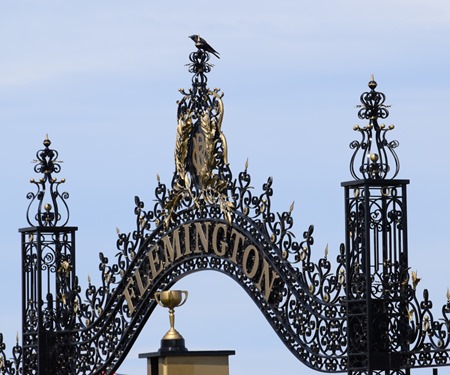 A big cheer greeted Winx as she stepped onto the track. 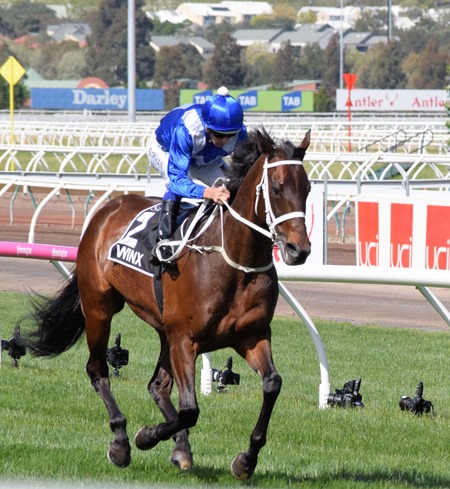 Winx on her way to the barriers

Winx previous three runs this Spring have been nailbiting to watch,  but this time around the race result was never in doubt  from the turn into the straight. Winx took command half way up the straight to draw further and further away from her nearest rivals Humidor and Ventura Storm as sequenced in the following photos. 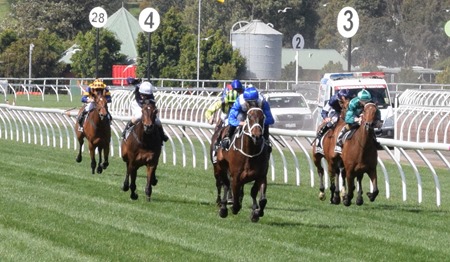 Up the straight – photo 1 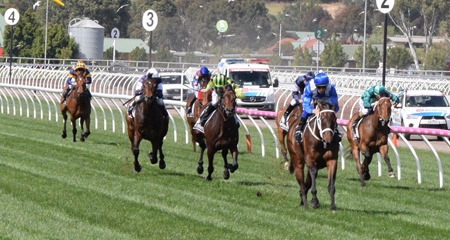 Up the straight – photo 2 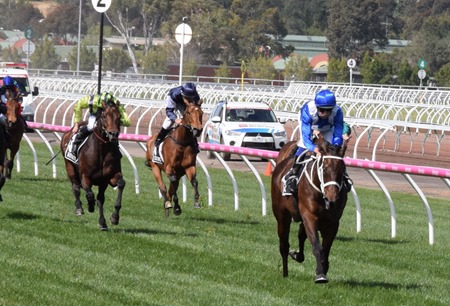 Up the straight – photo 3 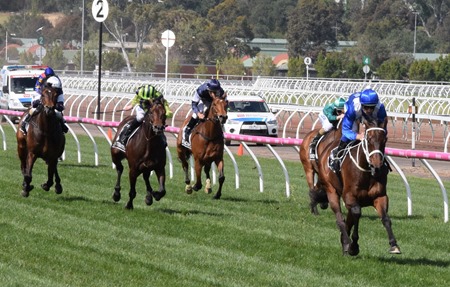 Up the straight – photo 4 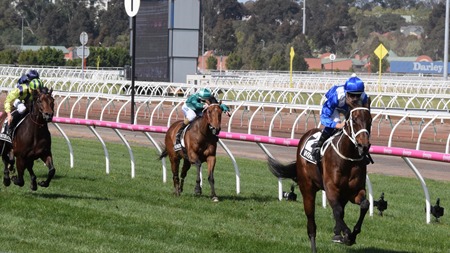 Up the straight – photo 5 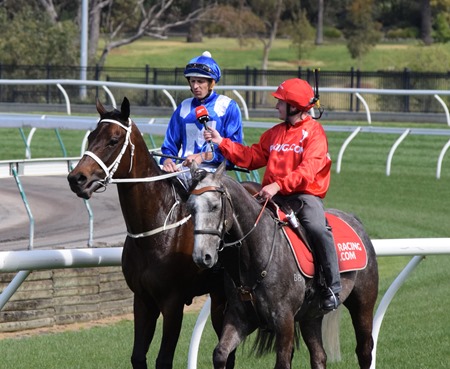 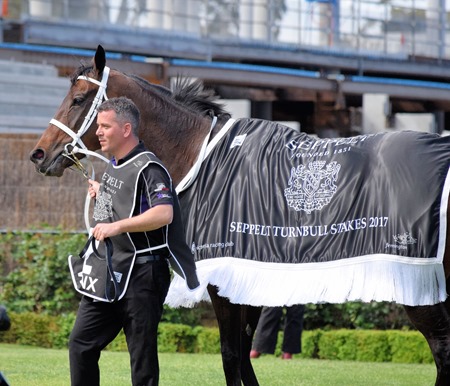 Winx in the mounting yard in the winners rug

After squeezing in on the fence around the mounting yard to get snaps of Winx parading, I decided to try and get Chris Waller’s signature in my racebook, so headed off to the stalls as the most likely place to find him.

When I got to Winx stall, there was still a big crowd outside it. She was taken off to be hosed down, and Chris Waller was obviously still at the Presentation, so I had brief sit down and then had the brain wave that I could most likely cross Chris Waller’s path as he returned to the stalls area from the Presentation which is held in the Mounting Yard. My hunch and timing were spot on, for as soon as I had reached the end of the stalls area and was heading towards the mounting yard, I spotted Mr Waller emerging and accosted him. He very obligingly signed my racebook and seemed in a happy mood, as why shouldn’t he be after Winx senstational win.

Interestingly Winx goes very well the Melbourne way (anticlockwise); according to her jockey Hugh Bowman better than on the Sydney clockwise circuit, so it’s pity they don’t race her Melbourne more often. Anyway, the Cox Plate is a little over two weeks away where hopefully we’ll get to see Winx win her third Cox Plate.

Before that was run, we watched Race 6, the Edward Manifold Stakes, a Group 2 race over 1600 metres for three year old fillies.

Again the favourite, in this case Leather‘N’Lace,  was rolled and the race was won by outsider Bring Me Roses from the equally long odds Hiyaam with Leather‘N’Lace running third. 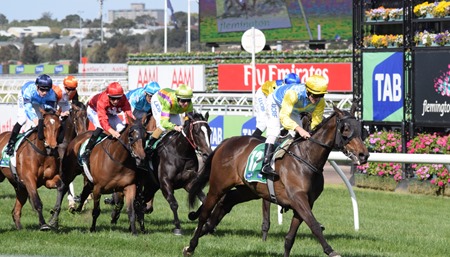 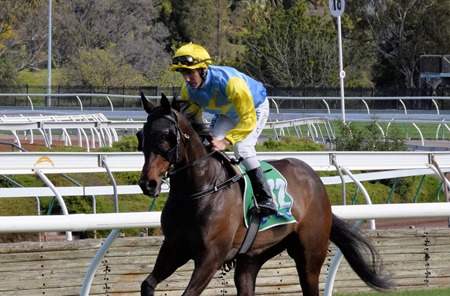 Bring Me Roses returns to scale

Darren Weir trained mare Amelie’s Star won herself a place in the Melbourne Cup with a two length victory over 100/1 shot Granddukeoftuscany and 50/1 shot Kellstorm in The Bart Cummings. Almandin ran fourth. 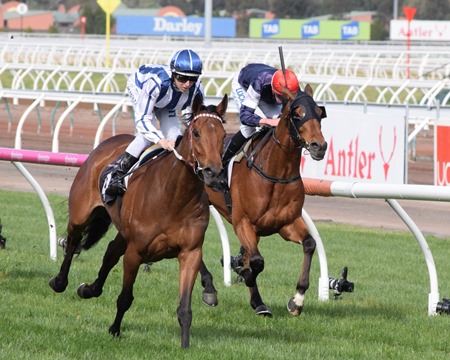 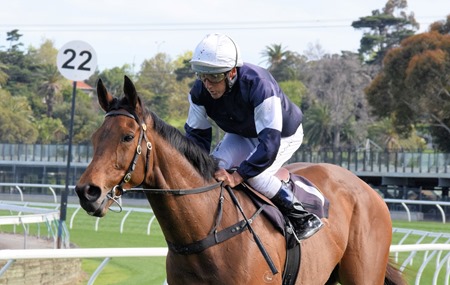 The weather was perfect last Saturday for a day at the races, sunny but not too hot with very little wind, compared to last year when it blew a gale and was quite unpleasant.

It took me about 1½ hours to get home, even though the trains and bus coincided in a timely fashion.

No doubt the same will apply next Saturday where the racing action is at Caulfield for Guineas Day, featuring four Group 1 races.