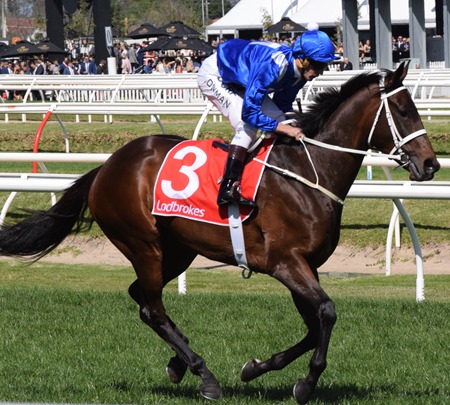 When you think about it, 900 kilometres seems a long way to go to attend a race meeting. But seeing Winx racing in the Group 1 Queen Elizabeth Stakes (2000 metres), and hopefully winning her 17th race in succession, is worth the time and effort of flying up to Sydney and returning the same day. I’ll be wearied by the time I get home, but in the meantime I’ll be enjoying the change of scenery and a mini adventure.

I’m looking forward to seeing Randwick Racecourse for the first time. I doubt it will be as beautiful as Flemington, but it should be bigger than Rosehill, to which I ventured to back in 2014.

Here’s hoping that you can get a spot on the fence in the public area to watch and photograph the action, and that the rails around the track are not too high to impede one’s view or stymie taking photos.

The Queen Elizabeth Stakes is run as Race 7, at the reasonable time of 3.15pm, early enough to not worry about getting back to the airport in time, and late enough to accustom myself to the course layout, and work out a good spot to stand on the public lawn fence.

It all depends on planes, trains and buses at what time I arrive at the track; with any luck it will be around 1.30pm. So I should be in plenty of time to watch the first of the four Group 1 races, which is the Australian Oaks. A rather good field of 14 staying fillies will contest the race with Victorian Oaks tearaway winner Lasqueti Spirit, New Zealand Oaks winner Bonneval,  New Zealand 1000 Guineas, and Surround Stakes winner La Bella Diosa and Victorian fillies Nurse Kitchen and Harlow Gold the top chances.

Winx faces eight rivals in the Queen Elizabeth Stakes, chief among them Hartnell, who has now raced against her six times without toppling her.

Others gunning for second spot are Exospheric, The United States and Doncaster Mile runners up Happy Clapper and Sense of Occasion. Naturally, all hearts will be hoping that Winx continues her winning streak.

The Sydney Cup, run over the 3200 metres has a rather uninspiring field of 14 runners, most of them European imports, all in with a chance of winning. There are no standouts, but recent winners Big Duke, Annus Mirabilis, Assign and Tally could be in the finish somewhere.

The final Group 1 of the afternoon is the Coolmore Legacy Stakes (fomerly known as the Queen of the Turf Stakes), a race for mares and fillies over 1600 metres.

It has a rather nice field with some classy mares such as First Seal, William Reid Stakes winner Silent Sedition, Coolmore Classic winner Heavens Above, Zanbagh and Dixie Blossoms, and smart fillies Foxplay and Oregon’s Day.

The weather in Sydney on Saturday should be mild and dry, and the track will be much improved from the last few weeks, with little rain falling on the city this week.

No doubt Randwick will be crowded with Winx fans, but I gather the throngs are not as huge as those at Flemington during the Melbourne Cup carnival.