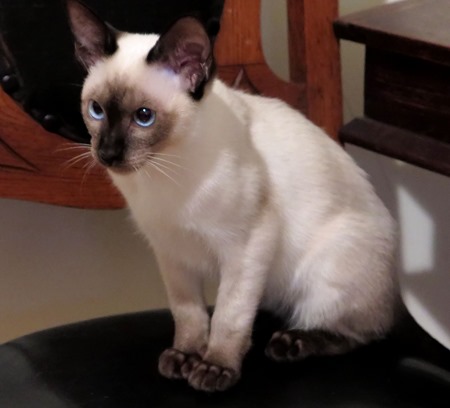 There has not been that much progress in the past week to report. The situation between the cat and kitten is still rife with tension, with Bingo getting bolder and more playful, much to Talya’s displeasure.  She’s getting a taste of her own medicine when I think back to when she first joined the Cat Politics domicile, and spent as much time stalking Willy as Bingo does to her.

Bingo however has progressed on the cat litter issue and now goes outside most of the time to relieve himself, though today it was raining and he didn’t fancy getting his paws wet.  He has as yet to work out the cat door, which is not all that urgent as we don’t really want him taking himself outside without supervision.

When he’s not tearing around and getting up to mischief, Bingo is a real lap cat - sweet and affectionate to his human companions.

Oh, and he retrieves.

When we throw his pink straw mouse, he picks it up and drops it near your hand to throw again. It’s not a fluke, he’s done it several times.