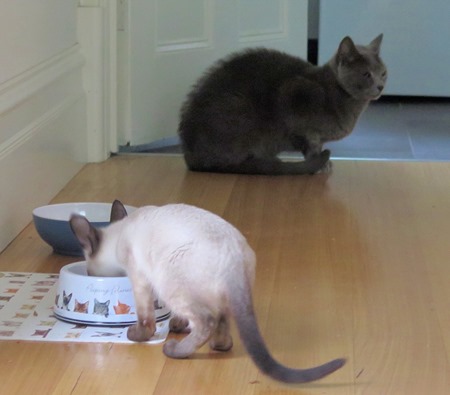 Bingo stealing Talya’s food (or the remainder there of)

It’s amazing that Bingo jumping on Talya last night,  when she was curled up asleep in her bed (a blanket on a chair in the living room) didn’t set the peace process back a hundred years, but cats are forgiving creatures and both cat and kitten today are acting as if it didn’t happen.

Bingo has grown noticeably bigger over the past week and is looking more like a small cat than a kitten. All too soon he’ll be grown up. 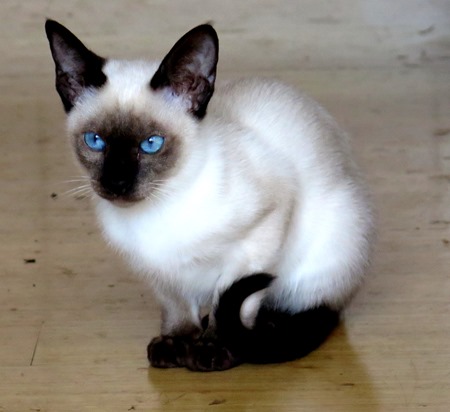 And no wonder he’s grown, considering the enormous amounts of food he demolishes. He’ll even push Talya out of the way and try to eat her food as well. Fortunately he still eats zucchini and gets through quite a lot of it in a week - we give it to him as a snack when he’s asking for food outside of feeding times.

He’s much more active this week and is a handful with his wicked ways, galloping all over the place and knocking stuff off shelves. We have to hide pens in drawers or he’ll lose them under furniture.

Talya’s basically given up hissing at him, though will take a swipe if he gets too close to her. But she’s coming round and doesn’t take it amiss if she sees him chasing a ball around the living room. It’s almost as if he deliberately sends a ball careering towards her to give himself the challenge of knocking out it out of her reach without attracting aggro.

Bingo spends a bit of his time outside and has been under the house, somehow knowing how to navigate from back to front and emerge cobwebbed but unscathed. But he doesn’t mind being an indoor cat and refuses to use anywhere else other than his litter tray to piss and shit in, much to B’s despair. It’s his kitten so he has to clean it.

Monty the next door neighbour’s  cat cruises through our back yard almost every day, but has yet to set eyes on the new feline resident. We don’t know how he’ll react, so we keep a close watch on Bingo when Monty’s around and hope he’ll be much bigger before the inevitable encounter takes place.

So getting a kitten was a good idea and at least gives me something to blog about, what with cat politics being constantly interesting and amusing.

'cat politics' indeed. But oh dear little kitty how lucky you are.
My friend Scott at Edwardian House Renovation posts good pictures of his cats and would welcome your visit. We are waiting for the suburban hedgehog to return to his backyard.
Happy Easter

Never type a link from memory
https://edwardianhouserenovation.wordpress.com/ is a lovely blog from Leicester