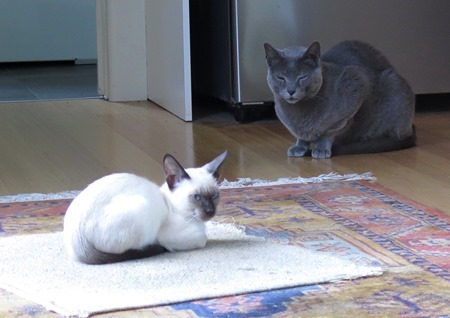 Talya & Bingo in the kitchen occupying the same space

Bingo has now been a part of the Cat Politics domicile for nine days and things are looking up as far as the cat political situation is concerned.

Both cats have been learning how to cope and taking lessons from each other on how to behave. After much hissing and growling, both Bingo and Talya are coming to accept that they share the same turf.

Talya made the mistake of running away when Bingo approached her, which he mistook for a game, chasing her as she fled.

She’s now standing her ground, and Bingo is getting to the point where, instead of being obsessed by her, he ignores her. They’ve even got to the point of touching noses a couple of times, and as you can see in the photo above, the cats are able  to sit around peacefully in close proximity -  unthinkable a week ago.

Bingo has grown a bit – he still eats ravenously – and is much more lively as he becomes used to his new life in this house.

He’s had a bit of an explore outside – supervised - and has even climbed a tree, though he had to be helped down.

A sweet natured  little cat, he is often affectionate and loves hanging out with both of us.  He even has sussed my morning habit of reading in bed and waits for me to get my coffee and climb back into bed, before settling on my lap, either above or below the covers. He also has Willy’s habit of sleeping under the covers with us at night.

And he doesn’t lack courage when dealing with a grumpy middle aged cat such as Talya, but is not aggressive, only playful. We enjoy the comical sight of a little cat arching his back and skipping stiff legged towards Talya in a show of bravado. 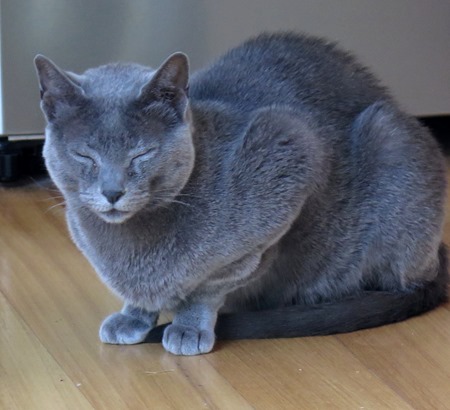 Talya looking sleepy and at peace

Talya is now talking to us though is still obviously pissed off about the new feline resident.

Things can only improve, and we’re encouraged by the reasonably short time is has taken to have the cats apparently accept each other.