A Couple of Guineas–Weekend Group 1 Racing 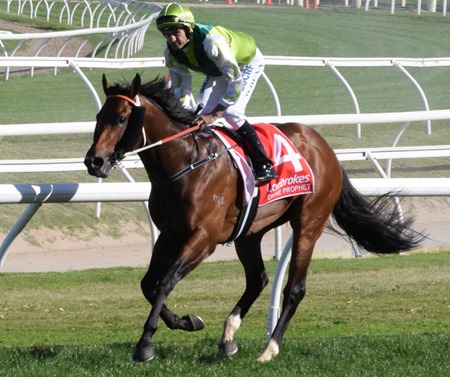 Divine Prophet  -  can he win the Caulfield Guineas/Australian Guineas double?

Flemington Racecourse hosts the sole Group 1 race in Melbourne  this week, so I’m looking forward to returning to its wide open spaces again for an afternoon of racing thrills.

Hey Doc, last seen winning the C S Hayes Stakes on Black Caviar Lightning day, is the current favourite for the Group 1 Australian Guineas. Whether he is up to the class of this race is questionable. Whatever his credentials, he faces a very smart field with the likes of Victorian Derby winner Prized Icon, and Caulfield Guineas winner Divine Prophet being his main rivals.

Others with claims are Seaburge, Attention, Oak Door and fillies Fuhryk, Legless Veuve and Harlow Gold.

The support card at Flemington is moderately interesting, but most of the focus of the weekend racing will be at Randwick where a second Group 1 Guineas (Randwick Guineas) is scheduled, along with the Group 1 Canterbury Stakes.

The weather in Melbourne is expected to be fine and the track fast, whereas in Sydney, a week of rain with more on the way will mean another heavy track. What’s new!

There is talk of the Saturday meeting being put off to early next week if the track is too heavy.

The grey flash Chautuaqua is entered in the Canterbury Stakes, a race over 1300 metres.  If he starts, it will be fascinating to see how he goes over the distance. He has won over 1400 metres in the past so the extra 100 metres distance from the standard 1200 metres should pose no problems for him. In fact the added distance will give him time to gather his considerable forces for a strong sprint to the line.

He will however have to beat some very classy rivals in Le Romain, Hauraki, Music Magnate and Japonisme.  And then there’s the New Zealand colt Ugo Foscolo thrown in at the deep by new trainers Gai Waterhouse and Adrian Bott.

With the upcoming Golden Slipper Stakes in mind, the first two races at Randwick , the Group 2 Reisling Stakes (for fillies) and Todman Stakes (for colts & geldings), are of interest.

Had Houtzen, the Magic Millions Two Year Classic winner, not been scratched from the Reisling Stakes it would have been exciting to see her race against the unbeaten current Golden Slipper favourite She Will Reign.

We’ll have to wait to see that contest another time.

She Will Reign is favoured to keep her winning streak intact in the Reisling Stakes having winning form on heavy going in her favour as well. Her closest rivals appear to be Frolic and From Within.

The Todman Stakes stars the highly regarded Chauffeur, along with Jukebox and Menari.