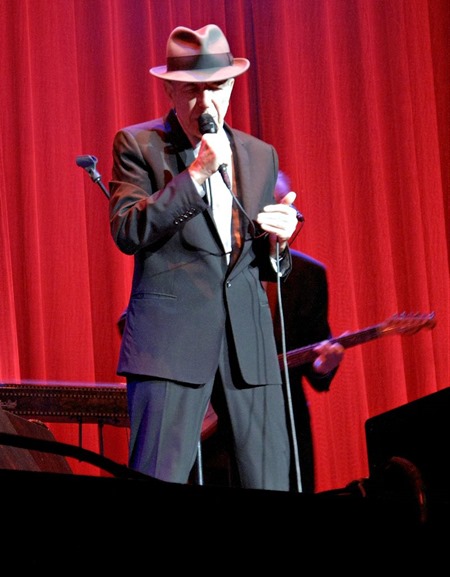 I heard the news today that the great songwriter and poet Leonard Cohen had died, so here are my memories of the man and his music.

Ironically, two days after a misogynist ladies man won the US Presidential Election, another much gentler, more respectful, ladies man departed this earth.

The mists of  time shroud my memories of when I first heard of Leonard Cohen, but it must have been back in the late 1960s, as I remember I had  copies of his first few albums in my record collection.

He really suited our generation, or those of us who pretended to be soulful and poetic, in between the sex and drugs and rock ‘n’ roll, though in a way his lyrics expressed all that too.

I was lucky enough to see him in concert twice, first  in 1980 at the Melbourne Comedy Theatre, which I thought an hilarious venue for a singer who was known to write “songs to slit your wrists by”.

My memories of the concert are vague, but I remember being surprised at how funny he was in person, and came away from the concert with a very positive impression.

The second concert was at a considerably bigger venue, the Rod Laver Arena in 2009.

I wrote a review of the show on my blog here, so I won’t go into detail except to say it was one of the best concerts I have ever seen.

The new world will not have Leonard Cohen as one of its citizens, and will be the poorer for it, but his memory will live long with those of us who loved his songs and music all those years ago in the old, old world.

... what a gentleman. He donated his concert takings to the Victorian 'black saturday' fire relief fund too. should have got that Swedish gong they gave to St.Bob

Can only agree Ms O'Dyne. He was a wonderful songwriter, had a generous soul was and gentleman and scholar.