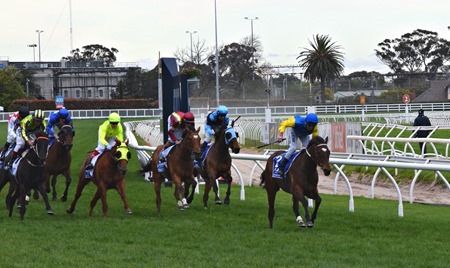 Melbourne woke on Saturday to a fine and sunny day, so it was a pleasure, despite a brisk wind, to head out to Caulfield for the Underwood Stakes meeting.

My arrival at the course was just after Race 3, so I missed Royal Rapture adding a fifth straight win to his season tally, but was in plenty of time for Race 4, the Inglis Cup, a race for four year olds over 2000 metres.

The in form Pay Up Bro started as the warm favourite, but he failed to run a place, with 13/1 shot Portion Control winning narrowly from stablemate Kifaah and Hierarchal. 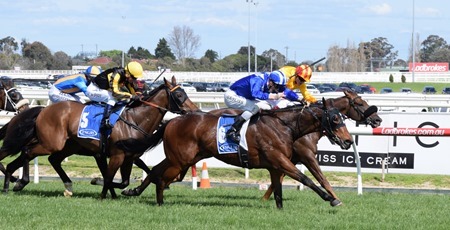 Down the straight in the Inglis Cup – Portion Control (inside) leads Kifaah and Hierarchal.

The first of the Group races was up next, the Group 2 fillies Thousand Guineas Prelude, so I hung around to wait for them to parade in the pre-parade ring in the stalls area and went up to the hill to photograph them heading for the barriers. 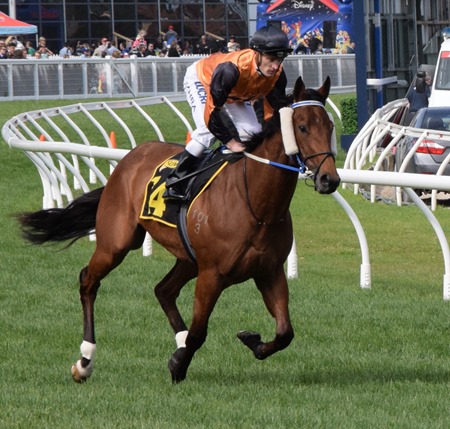 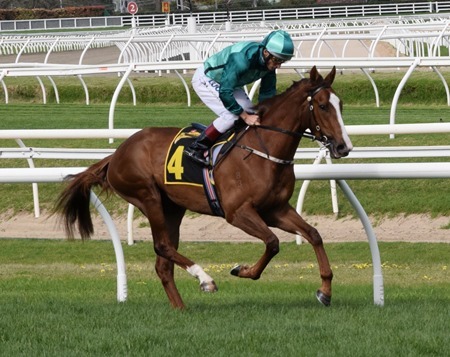 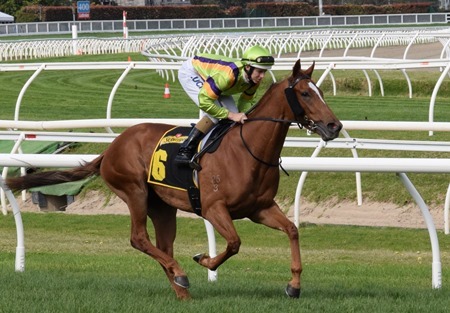 Just past the winning post – Legless Veuve still ahead

The amusingly named Legless Veuve romped in at big odds, her only previous win being a lowly race at Sale. La Luna Rossa was only beaten by a half length and looked the goods as far as the Thousand Guineas is concerned.

La Luna Rossa’s stablemate Saracino was the favourite for the colts Caulfield Guineas Prelude, but he too failed to place and finished fifth, though only a length from the winner, Sacred Elixir, another New Zealander, who already had a Group 1 race win (JJ Atkins in Queensland over winter) to his credit .

Here are the major players in the mounting yard or heading to the barriers. 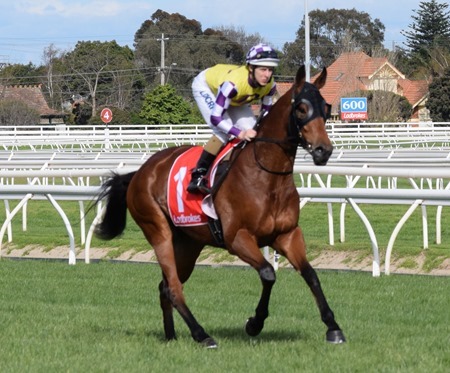 Sacred Elixir on his way to the barriers 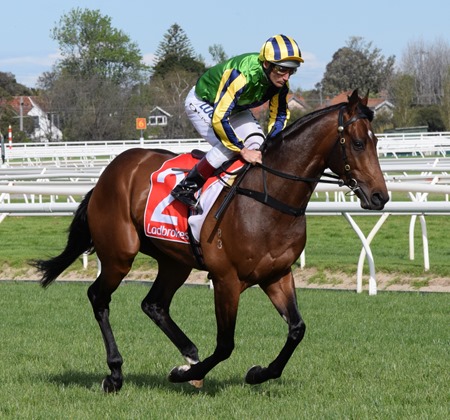 Saracino on his way to the barriers 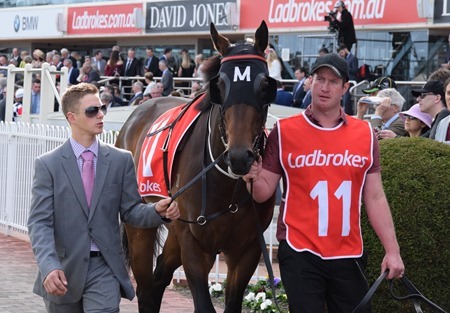 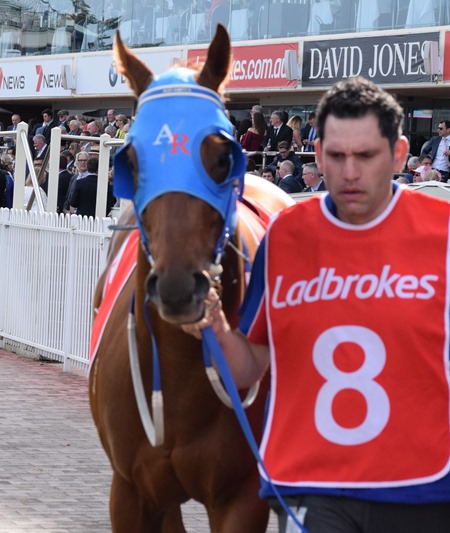 Down the straight in the Caulfield Guineas Prelude – Sacred Elixir is about to overtake Revolving Door with Seaburge (4th place) just behind.

The Living Legends special guest on Saturday was Might and Power, but I failed to find him. Apparently he was being displayed in one of the children’s play areas, which I avoided like the plague.

However, in the stalls area several of the horses I was keen to see were being walked and I was delighted to get the following photo of Lucia Valentina in the walking ring. 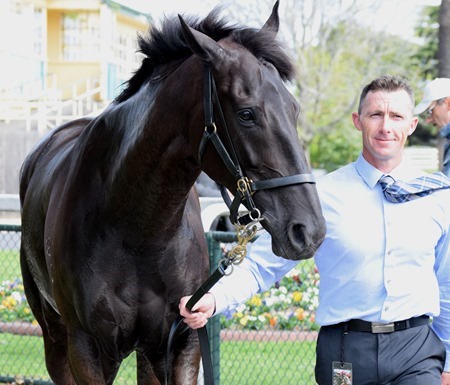 Lucia Valentina in the walking ring

Up next on the program was the first of the Group 1 races, the Sir Rupert Clarke Stakes.

Bon Aurum emulated his sire Bon Hoffa (2007 winner) and won his first Group 1 race.  He managed to hold out the popular Darren Weir trained Voodoo Lad, and Fast N Rocking finished third, the best he has run for years.

Sydney horse Counterattack started as favourite, but like most of the favourites on the day, he finished well back.

Xtravagant was well behaved this time, and ran fiercely in the early stages of the race, but faded to finish at the tail of the field.  I saw him early in the afternoon in his stall and he was good as gold. 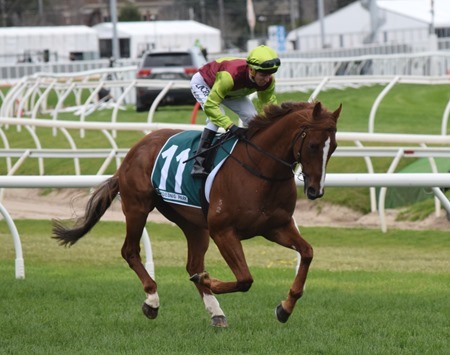 Bon Aurum on  his way to the barriers 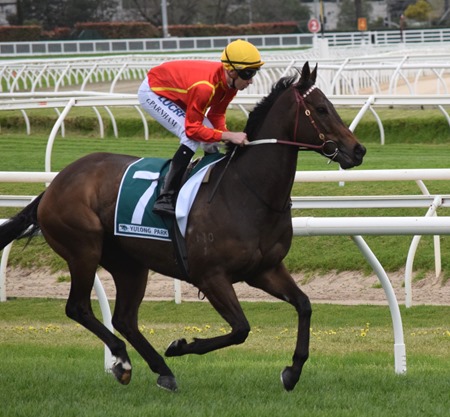 Voodoo Lad on his way to the barriers 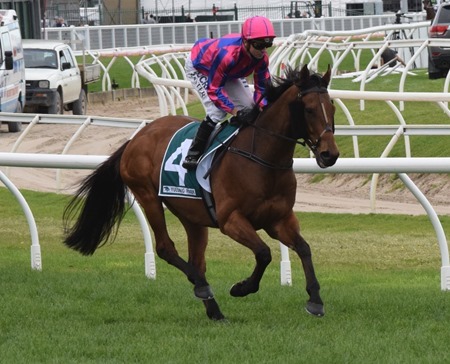 Fast N Rocking on his way to the barriers 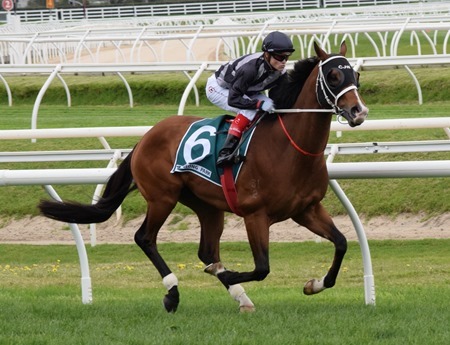 Counterattack on his way to the barriers 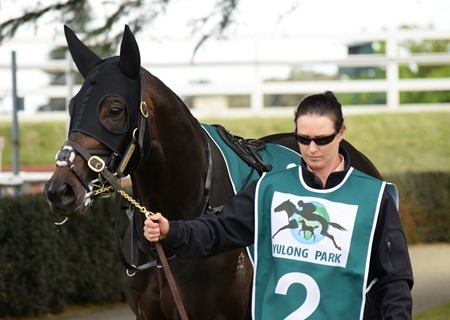 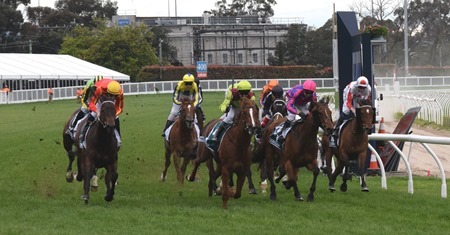 Just past the winning post in the Sir Rupert Clarke Stakes 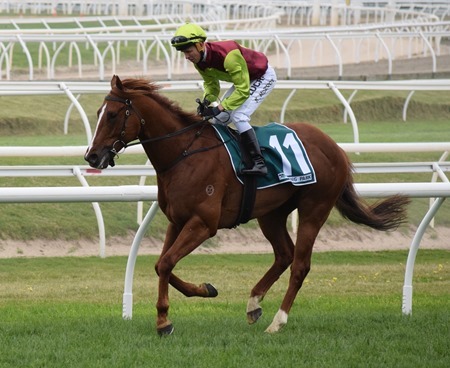 The Underwood Stakes was scheduled as the second last race on the program so it was getting on for 5.00pm when the race was run,  the light having deteriorated considerably by then.

Even so, I decided I would get photos of the field in the mounting yard and on the fence, in the gap where an emergency access gate is placed.

The hedge abutting the track at Caulfield is so high that if you were vertically challenged you would not be able to see the track. I heard a number of people complaining about this, but doubt MRC will do anything to improve the view for General Admission patrons.

The emergency access gate does not have a sign to keep clear, so I figured it was OK to stand there as I had been doing on and off throughout the afternoon, and several other persons were  taking advantage of the view as well, when Security turned up and turfed us out.  The horses engaged in the Underwood Stakes were heading to the barriers at that time, so I gave up on getting photos of them running down the straight and headed back to the hill.

Black Heart Bart proved that he had no trouble running 1800 metres and gave Darren Weir his third Group 1 victory for the season. The former Western Australian galloper has become a force to be reckoned with these days under the Weir mantle. His next assignment is the Group 1 Caulfield Stakes where he will encounter the formidable Winx.

Black Heart Bart won by 2½ lengths from He Or She with Lucia Valentina flying home for third at the speed of light. 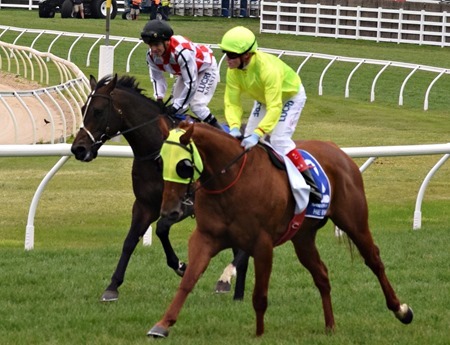 He Or She (yellow silks) and Awesome Rock return to scale 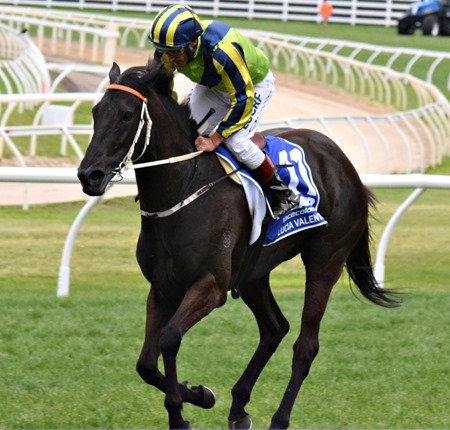 Next weekend is chock full of sporting events – the AFL Grand Final being the main show for most of Melbourne.

There is also plenty of racing action, starting on Friday night at Moonee Valley, who will host the Group 1 Moir Stakes in which Chautauqua will be making his first appearance for spring.

Sydney’s main Spring Racing meeting is at Randwick on Saturday and includes three Group 1 races – Epsom Handicap, The Metropolitan and the Flight Stakes.

And on Sunday, the Group 1 Turnbull Stakes is run at Flemington along with several other interesting races.

I may go to Moonee Valley on Friday night, depending on the weather which is forecast to be a vile cold wet day, but will definitely head to Flemington on Sunday whatever the weather.