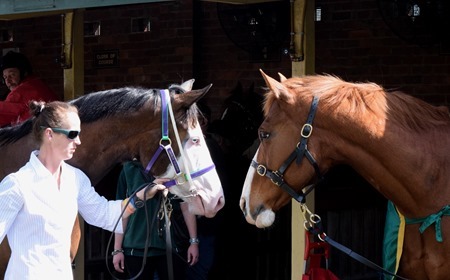 It was sheer coincidence that the two white faced horses were both at Caulfield on Saturday. Apache Cat was there as the Living Legends representative, and the promising and striking looking mare Miss
Vista was present for a between races gallop, due to her regular track at Bendigo being washed out.

I missed Miss Vista’s gallop, but got to see her after it was over and was able to get some snaps of her in the pre-parade ring. 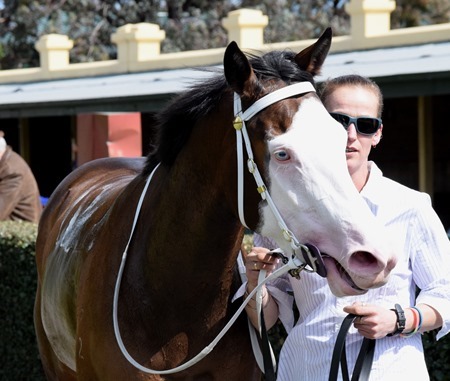 Miss Vista in the pre-parade ring after her gallop

Whether the get together with Apache Cat was prearranged or not, I was fortunate to be in the stalls area when it occurred, noticing the regular press photographers gathering near to where both horses were stabled.

The kind folk of Living Legends brought Apache Cat out of his stall later so I could get a photo of him by himself. 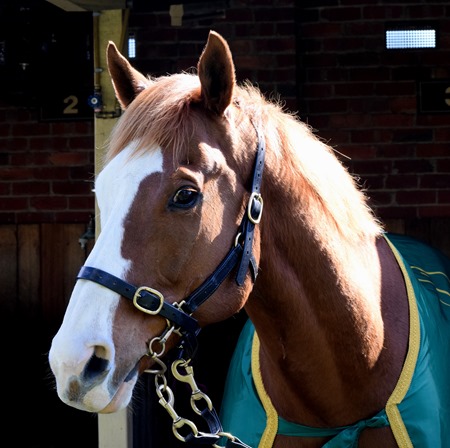 Apache Cat outside his stall

Saturday was a warm and sunny day, which was quite a change from the last few weeks where it has been overcast and chilly.

I wasn’t sure how the Nikon would go in sunny conditions. Apart from a few photos where the contrast is over the top, creating dark shadows, it mostly behaved itself.

Upon arriving at Caulfield at around 1.00 pm, I headed for the public lawn to watch Race 3, which was a race for fillies over 1400 metres. 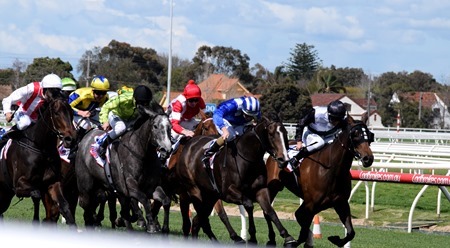 It was won by Exocet by two and half lengths from Outback Rain and Whyouask.

The early races were not particularly interesting, but in each there was a runner I was keen to see.

Such was the case in Race 4, the MRC Foundation Handicap, a race for mares over 1400 metres, where Miss Gunpowder was the original favourite, until French Emotion became the fancied one.

I watched the field parade in the pre-parade ring then went to the hill above the stalls to see the action and take snaps. 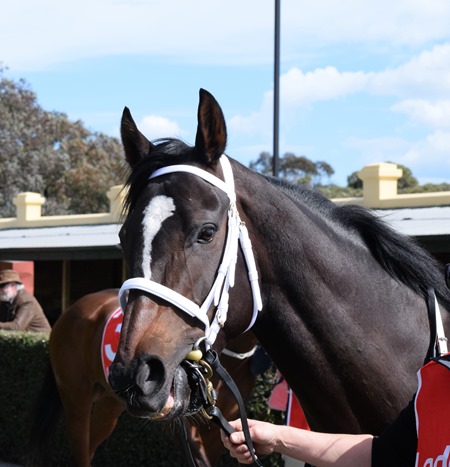 Miss Gunpowder in the pre-parade ring.

Alaskan Rose ended up the narrow winner from French Emotion with Miss Gunpowder a close third.

Just past the post – a line of mares swings around the corner. 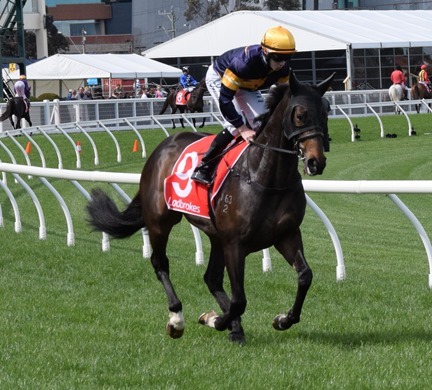 Alaskan Rose on her way to the barriers 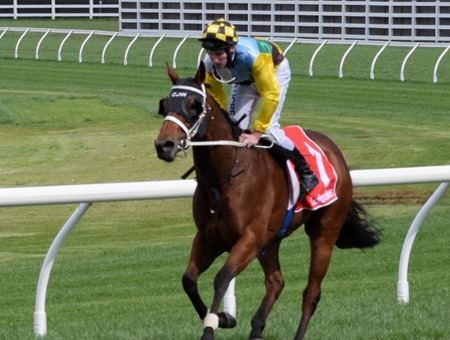 I mostly spent the afternoon hanging around the stalls area, though ventured closer to the big screen to watch the Sydney races, especially the Hill Stakes and George Main Stakes, where both Hartnell and Winx respectively won their races with ease.

Also victorious at Randwick was the Chris Waller trained filly Foxplay in the Group 2 Tea Rose Stakes.  A steel grey filly, she’s one to follow and I hope she comes to Melbourne later in the Spring, perhaps to contest the Thousand Guineas.

The next race planned for Winx is the Group 1 Caulfield Stakes – whoopie – run on Caulfield Guineas Day in early October. Hartnell is expected to run in the Caulfield Cup, so we’ll get to see him in action in Melbourne as well. He raced here last Spring with no success, but appears to have improved considerably since then.

Races 5, 6 and 7 filled in the time until the Naturalism Stakes and afforded some nice photo opportunities. 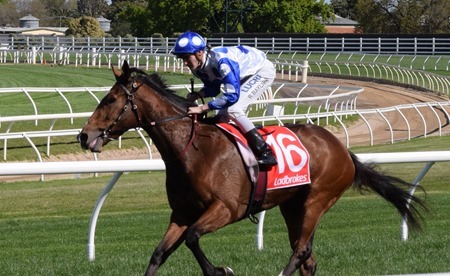 Harlow Gold the winner of race 5 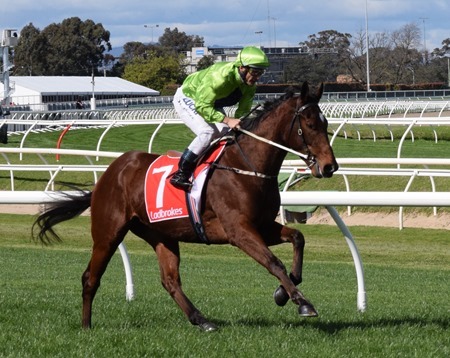 Rocketeer who ran second to Harlow Gold in race 5 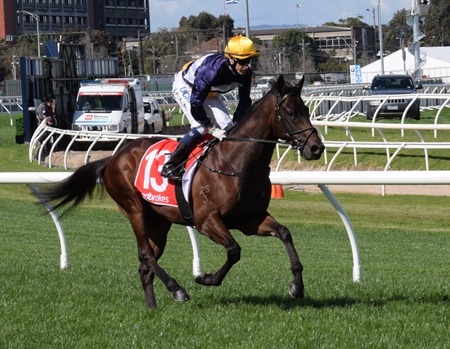 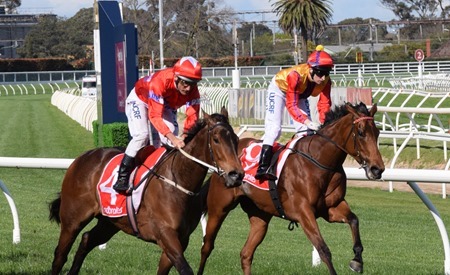 Race 6 past the post – the winner Secret Agenda has the no 4 saddlecloth.

Finally it was time for the feature race and I’d found a possie on the fence on the public lawn where there was gate and no hedge, so you could get clear unimpeded shots of horses running down the straight.

It was great to see Jameka win the Naturalism Stakes. She had drawn Barrier 1, often a curse, but a clever, patient ride by jockey Nick Hall, keeping her to the fence and on the pace in about fourth spot, had her primed to take the short cut on the turn and she galloped away to a 3¾ length win from Gallante with Berisha 5 lengths behind taking third place. 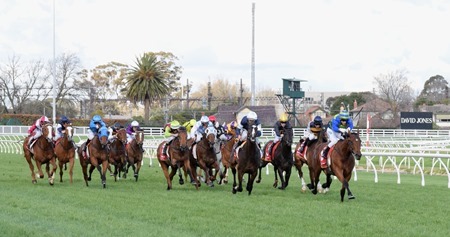 Jameka forges ahead up the straight leaving the rest of the field in her wake. Jameka on her way to the barriers 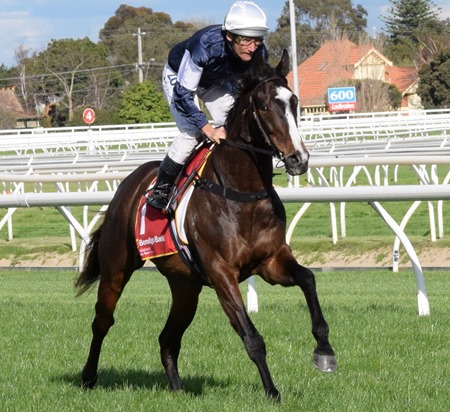 Gallante on his way to the barriers 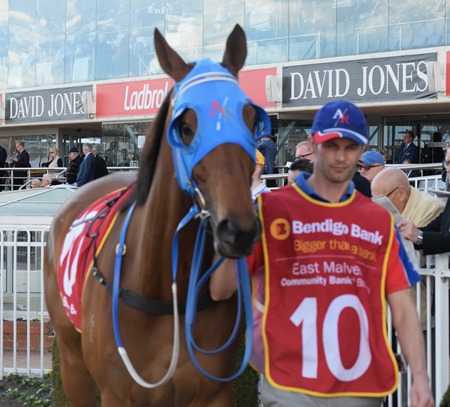 Berisha in the mounting yard 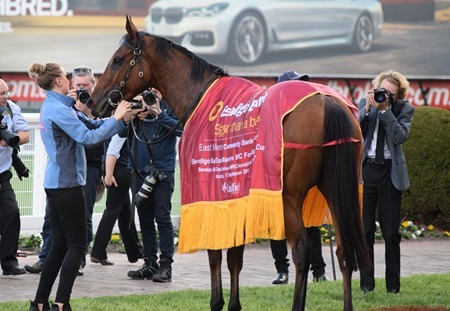 Jameka in the winners rug posing for the press

Jameka was already qualified for the Caulfield Cup, her Oaks win last spring guaranteeing her entry. She’s now second favourite for the Cup behind Hartnell.  It would be fabulous she could win it for the girls.

There wasn’t much of a crowd at Caulfield last Saturday, but I did notice quite a few punters dressed as wizards – Gandalf knows why.

These guys were only too pleased to pose for a photo. 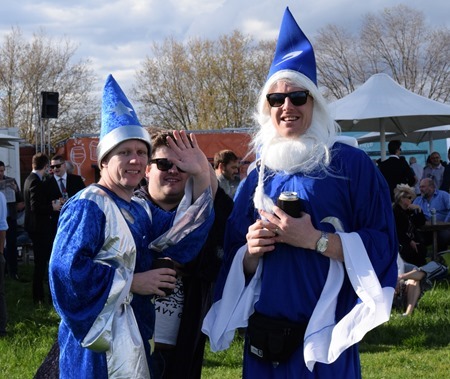 It’s back to Caulfield again next Saturday for the Underwood Stakes meeting, which besides the two Group 1 events, has a classy support card where we’ll get to see some of the Sydney stars in action in the Guineas Preludes and feature races.

Lovely images as always Ms Cat. If the connections had a sense of humour they would give Apache Cat one of those white hand prints the actual Apaches used to put on their Pintos flanks. Good luck with the punting.

The Living Legends attendants are more prone to tucking roses under the horse's bridle than planting hand marks on their flanks. Still LL CEO Andrew Clarke is a cheery chap and may be open to the suggestion.

As for the punting, I rarely indulge in that activity anymore - don't want to jinx my fancies.