Bart Blows Them Away in the Memsie 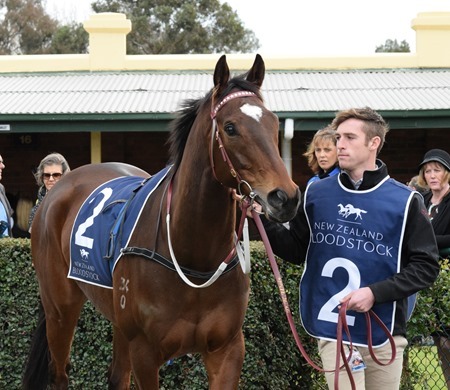 Black Heart Bart has truly shown what a great horse he is since joining Darren Weir’s stable. He now has two Group 1 victories on his CV, winning the Goodwood in the autumn and now the Memsie Stakes at his first run this spring.

It was a pleasant afternoon at the races on Saturday and the hours spent at the track passed in a flash.

I arrived in time to watch Race 4, a 1200 metres sprint handicap that was won by outsider Lord Barrington from Camdus with Bon Aurum running third. As the outside fence had been restored flush against the hedge, it was easier to take photos, but as I stuffed up the shot of the Race 4 finish and don’t trust the Nikon’s ability to adapt to the light,  I opted for the hill above the stalls for the rest of the afternoon.

Before Race 5 however I decided to cruise through the stalls area to see who had arrived.

The Weir mob – all twelve of them – were stabled together, so it was convenient to get photos of the four Memsie Stakes contenders from Weir’s stable – Mahuta, Black Heart Bart, Palentino and Prince of Penzance. 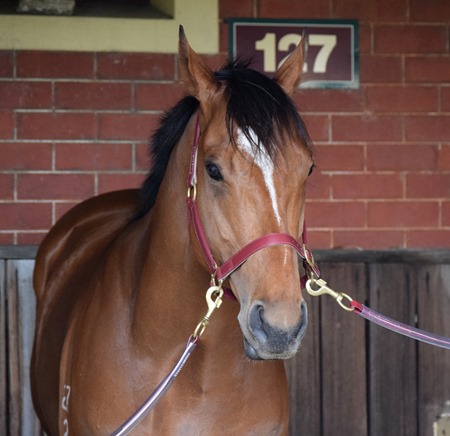 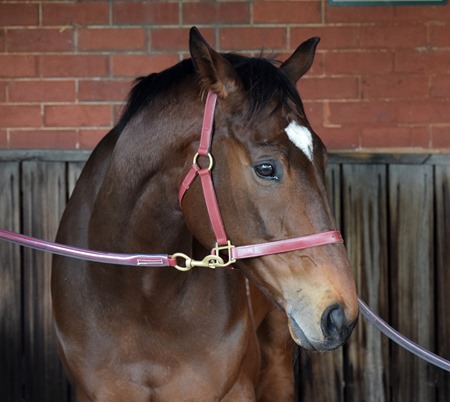 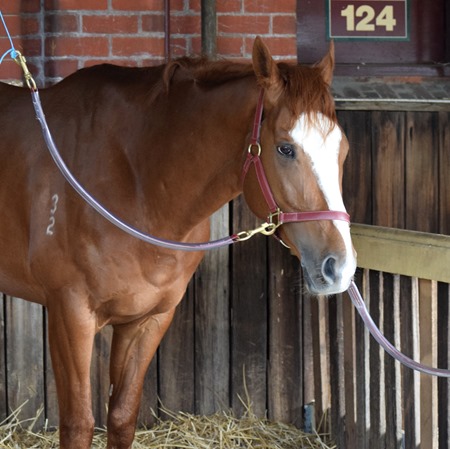 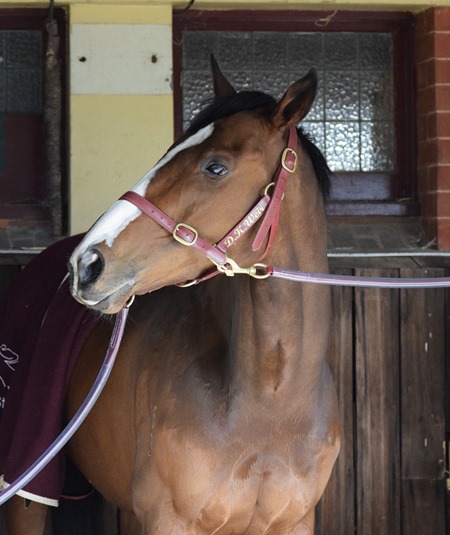 Race 5 was the Group 3 Resimax Stakes, a sprint over 1100 metres.  Under The Louvre was the favourite, but he was upstaged by Redzel a Sydney horse having his first start in Melbourne. 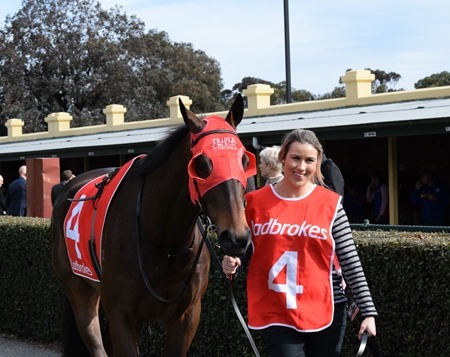 Redzel in the pre parade ring 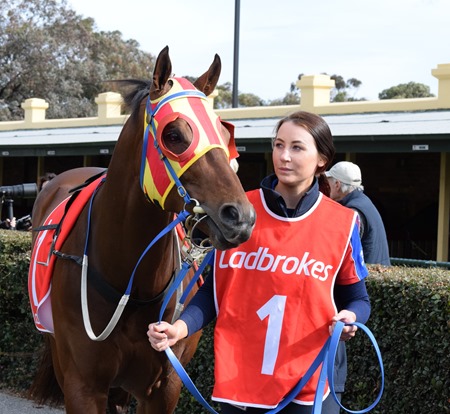 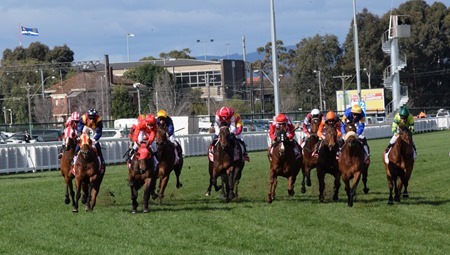 Returning to the stalls area my aim was to get photos of Alpine Eagle and more of the Memsie Stakes field.

Alpine Eagle was being walked in the main ring, along with Rising Romance and Tarzino. 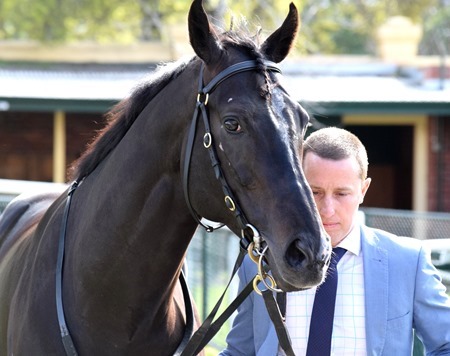 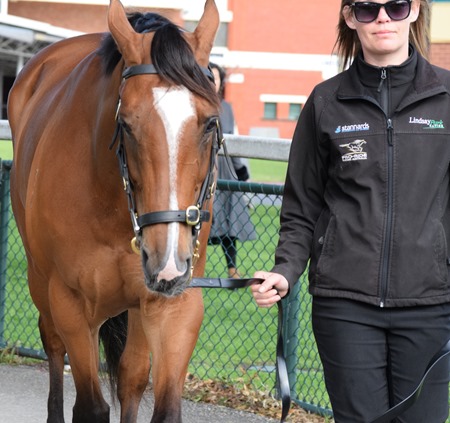 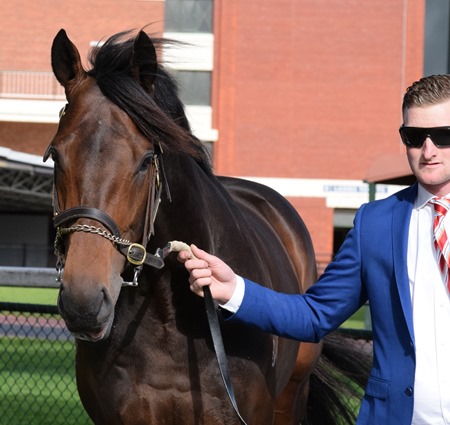 Alpine Eagle looked magnificent (photos don’t do him justice) and Rising Romance was glowing with health. Tarzino has grown since I last set eyes on him and is a big burly boy.

Also hanging out in their stalls were… 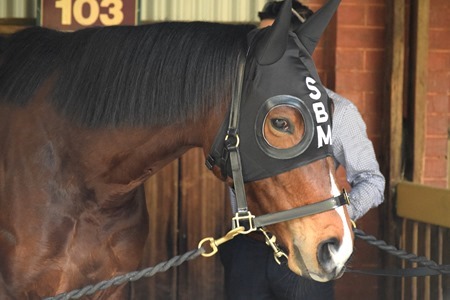 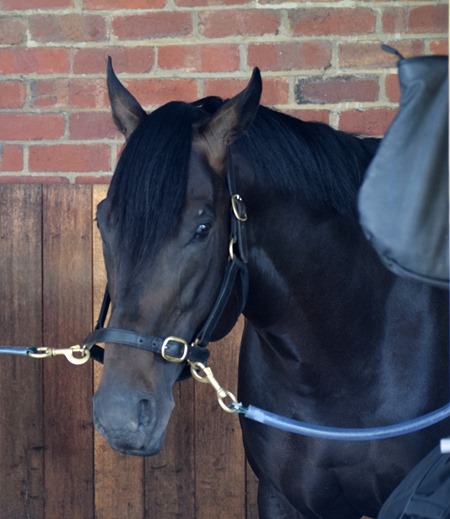 The H.D.F. McNeil Stakes is generally a fairly interesting race, it being a Group 3 race for Guineas bound three year olds, run over 1200 metres.

The starting favourite was Highland Beat, but a very clever ride by Dwayne Dunn on Defcon, squeezing through an inside gap denied him the bikkies. Wazzenme finished third. 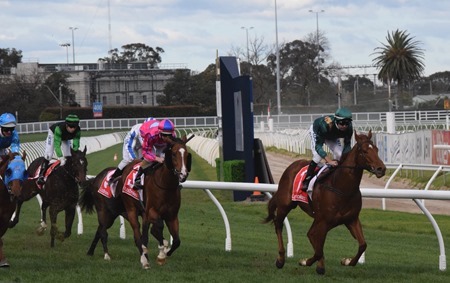 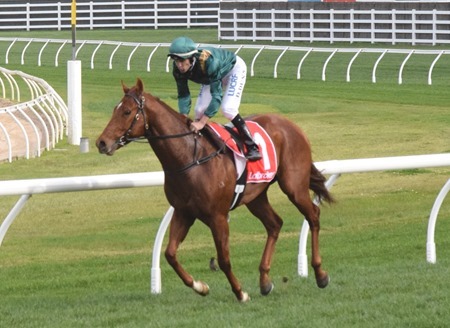 Defcon returns to scale after winning the McNeil Stakes 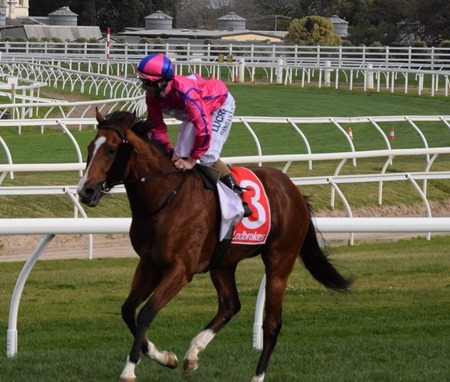 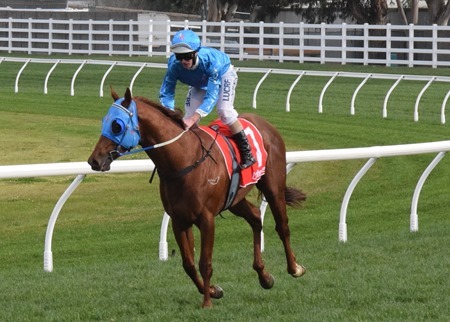 There wasn’t long to wait for the Group 1 Memsie Stakes and the field were assembling in the pre parade ring by the time I got back from buying a drink. 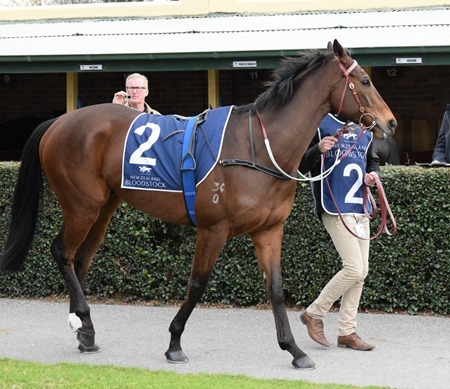 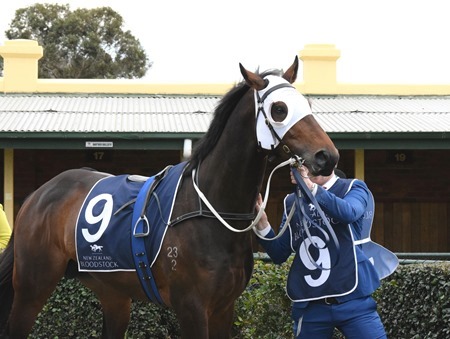 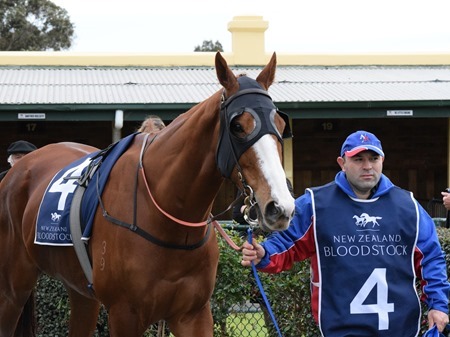 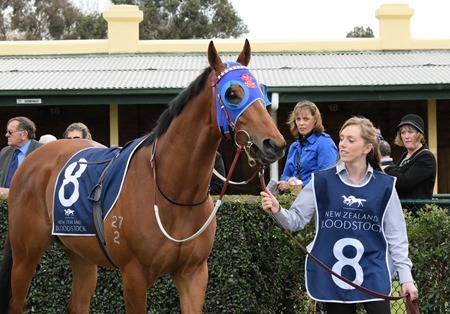 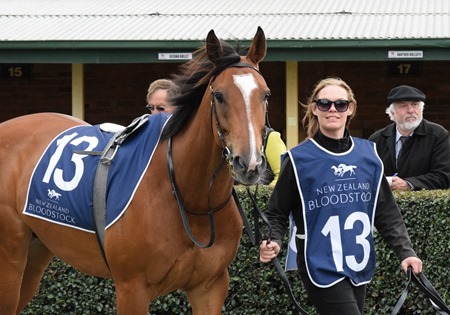 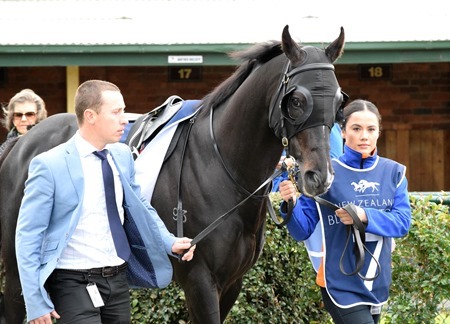 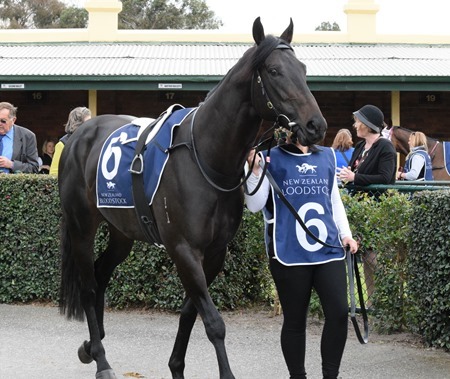 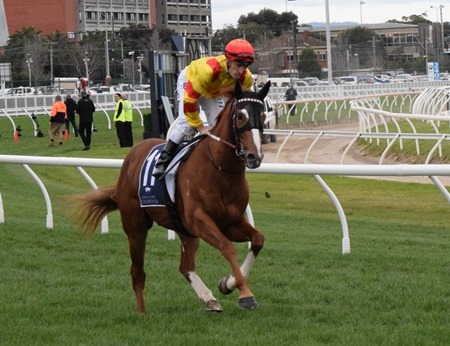 Palentino on his way to the barriers 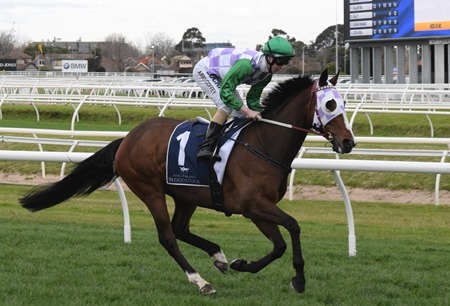 Prince of Penzance on his way to the barriers 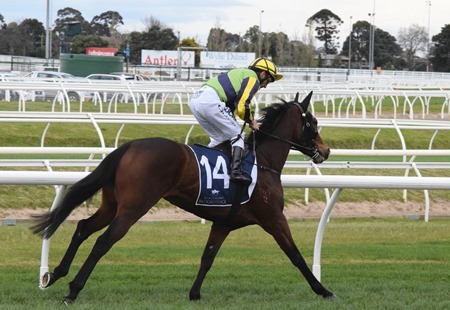 Sofia Rosa on her way to the barriers

Black Heart Bart started as the short priced favourite, and certainly didn’t disappoint. The race was run at a rattling pace, Charmed Harmony taking the lead from Tashbeeh early on with Rising Romance and Mahuta racing in third and fourth spots, closely followed by Black Heart Bart.

Black Heart Bart took control in the straight, charging down the outside with Rising Romance at his heels. He won by 1.25 lengths from the game Rising Romance and Mahuta was third a couple of lengths behind. Alpine Eagle was a tad disappointing finishing in sixth place.

And so Black Heart Bart joins the illustrious list of Memsie Stakes winners. He could go on to greater glory as the Spring racing season progresses. 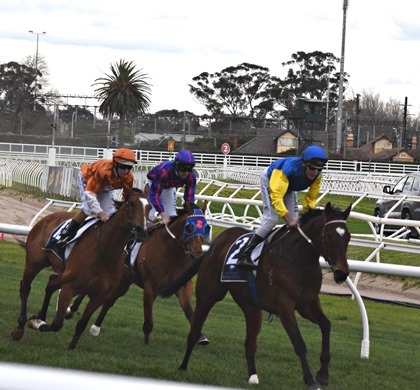 Memsie Stakes just past the post – the first three in sequence

I called it quits after the Memsie Stakes, the afternoon chill setting in and deteriorating light discouraged lingering any longer.

Walking back through the stalls area heading for the gate, I came across a raven strutting around on the grass. It was being tormented by another species of bird, a mynah perhaps. As I have long strived to get a decent photo of a raven, the close proximity and tameness of this raven enabled me get a good shot of it sitting on the wire fence surrounding the stalls, its black plumage glowing steely blue in the late afternoon sun. 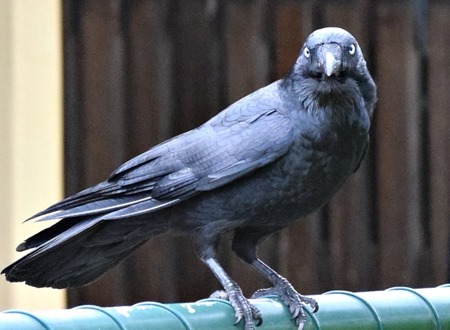 Next weekend the racing action is at Moonee Valley featuring the Group 2 Dato Tan Chin Stakes. And in Sydney Winx will be striding out in her second race for the spring in the Group 2 Chelmsford Stakes.