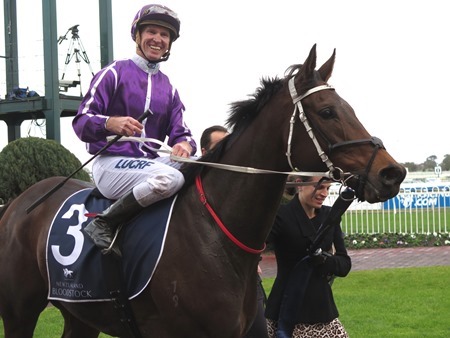 Five time Group 1 winner Boban died in a freak paddock accident on Sunday night, and thus passed a sterling middle distance runner. He was recently retired from racing after bleeding in the 2016 Futurity Stakes, so unfortunately he didn’t get much time to enjoy it.

His last win was at the end of August last year, when he took out the Group 1 Memsie Stakes at Caulfield. Previous to that he won the 2015 Group 1 Doomben 10,000,  2014 Chipping Norton Stakes and the 2013 Emirates Stakes and Epsom Stakes.

My condolences to his connections.

The so called Championships continue this Saturday at Randwick with four Group 1 races on the card.

Winx originally was set to target the Group 1 Queen Elizabeth Stakes, but commendably her connections have decided to give her a spell after her gruelling run in the Doncaster Mile. We can therefore look forward to seeing her again in the Spring as she’ll be aimed at winning the Cox Plate for a second time. It would be nice if she came to Melbourne early and contested one or two races before the Cox Plate.

With Winx out, the Queen Elizabeth Stakes is fairly wide open with a number of horses capable of winning the 2000 metre race.

For Criterion, it his last race before retiring to stud, so no doubt his owners will be hoping he goes out on a high note. He’s got the credentials having won the race on a bog track last year.

Preferment has won his last two starts, the Group 1 Australian Cup and The BMW by narrow margins, so is sure to be in the finish here and could well win. He has the Chris Waller/ Hugh Bowman factor in his favour as well.

The imported Irish stayer The United States has finally settled and won his first Group 1 when taking out the Ranvet Stakes at his last start. He is the current favourite, so if he handles soft tracks (of which he has little experience) he is a top chance.

Of the others, Happy Clapper who ran second to Winx in the Doncaster Mile and would have won if she had not competed, has to be a goer if he can manage the short back up. And then there’s Hauraki who has run second to The United States and Winx at his last two starts.

If the track is heavy Lucia Valentina has to be a good chance at good odds.

The first of the Group 1 races scheduled is the Australasian Oaks  run over 2400 metres, in which Jameka is backing up after running second in the ATC Derby last week. Back against her own sex she is the top pick if she has recovered.  Her main rivals are Vinery Stud Stakes winner Single Gaze, runnerup Valley Girl and third placed Happy Hannah.

The Sydney Cup is run over the same distance as the Melbourne Cup (3200 metres) but has not the same status, despite the prize money being quite generous. It looks as if it could result in another Chris Waller Group 1 trifecta, with top chances Who Shot Thebarman, Grand Marshall and Libran belonging to his stable.

Formerly called The Queen of Turf Stakes, the Coolmore Legacy Stakes is a Group 1 race for mares and fillies over 1600 metres. Suavito, who has drawn the carpark is the class mare in the race.  Fellow Melbourne mares Badawiya and Azkadellia and Sydney mares Zanbagh, Heavens Above, Vergara and Lady Le Fay are her main rivals.

Also of interest due to the presence of Petits Filous is the Group 2 Arrowfield 3yo Sprint. She has certainly been thrown in the deep end as her rivals are quite classy, with runners like Japonisme, Kinglike, Stellar Collision, Hellbent and Ghisoni in the field.

As I write, the track condition at Randwick is reported to be a soft 6, which is defined as: moist but not a badly affected track, though after a few races that may change for the better or worse.

It was another great day of racing at Randwick this afternoon, with some sensational results, with very few favourites saluting.

The only favourite to win a Group 1 was Azkadellia in the Queen of the Turf Stakes, beating long odds Heavens Above by a couple of lengths with Noble Protector running third.

The Oaks was won by the fiesty New Zealand filly Sofia Rosa with outsiders Ambience and Believe running second and third. Jameka who was too far back early in the race, was left flat footed in the straight and finished fourth.

I was delighted to see Lucia Valentina take out the feature event, the Queen Elizabeth Stakes; not that I took my own advice and had any money on her.  The United States finished second and Happy Clapper ran third. Lucia Valentina raced at the tail end of the field and when making her move in the straight, almost fell, then was blocked for a run. When she had a clear run, she whooshed down the outside to score by over two lengths. A remarkable performance.

The two Italian girls are of course Sofia Rosa and Lucia Valentina who are both owned by the business man Lib Petagna, who certainly had a good day at Randwick.