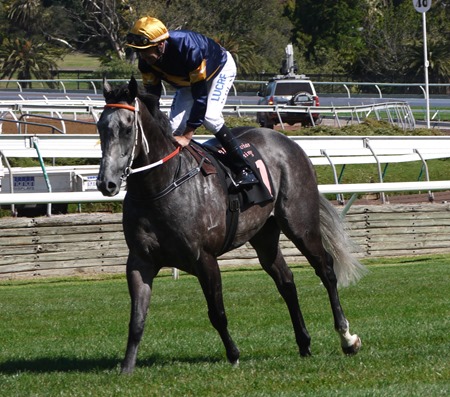 Chautauqua returns to scale after winning the 2016 Black Caviar Lightning

The grey flash, Chautauqua returns to the scene of his latest victory, to attempt the Lightning/Newmarket double at Flemington this coming Saturday. He is the top weight on 58kg and has drawn the outside barrier, but he is the one to beat, and will probably start as favourite.

Ten other horses will be trying to one up him, the most threatening being the Chris Waller contingent Delectation and Japonisme. Terravista is missing from the field, so that’s one less to worry about. Last year the Newmarket Handicap was won by the lightweighted three year old Brazen Beau who relegated Chautuaqua to second, so that gives Japonisme, sole filly Secret Agenda, Counter Attack and Keen Array all a chance.  A new name in the eastern states racing scene is Black Heart Bart (great name!), another West Australian galloper now trained by Darren Weir,who will be having his first start in the east in the Newmarket.

As well as the Newmarket Handicap, Flemington hosts the Group 1 Australian Cup a race over 2000 metres for middle distance runners and stayers.

Old campaigner, Happy Trails is pitted against the younger brigade, the top picks being Bow Creek and Preferment along with mares, Rising Romance, Suavito and Fenway. It has been a long time since a mare has won the Australian Cup, Makybe Diva being the last in 2005, but the above girls have been holding their own against the boys, so one of them could steal the show.

Mourinho was an acceptor for the Australian  Cup, but he was scratched today having succumbed to an old tendon injury, which signifies the end of his racing career.

There is a fine support card at Flemington that includes the Group 2 Sires Produce Stakes, Blamey Stakes and Kewney Stakes, but I’m not going to preview them here.

And at Rosehill the feature race is the Group 1 Coolmore Classic, a race for fillies and mares over 1500 metres. Unbeaten filly Ghisoni is the current favourite, but she’ll have to beat classy mares like Lucia Valentina, Politeness, Solicit, Amicus, Zanbagh and Azkadellia.

We have been experiencing a late summer heat wave here in Melbourne over the past two weeks, though yesterday it rained practically all day – welcome after the long dry spell – but today, Friday it’s back to being sunny and humid, so the Flemington track shouldn’t be affected all that much.

Tomorrow is forecast to be mild and overcast with a chance of rain in the afternoon.  Those conditions suit me fine, as I intend to soak up the racing action with the last Group 1 race meet for Melbourne’s autumn racing season. Australian Cup Day is always enjoyable, not overcrowded like the spring carnival and generally pretty laid back.