Moir Stakes finish – Buffering wins it for a third time

It was a bumper weekend of racing, despite the AFL Grand Final dominating the news in Melbourne, and by the end of it I was quite exhausted.

Not that I went to all three meetings over the weekend, but Friday night and Sunday certainly provided plenty of exercise,tramping around the courses. Top that with Daylight Savings Time beginning on Sunday, I felt somewhat jet lagged as a result.

However, I’ve finally sorted my photographs, so here’s a brief rundown of the racing action at Moonee Valley and Flemington.

Taking good photos at night meetings with my serviceable, but not professional camera, is nigh on  impossible. I took along the Canon G16 and it did a good job in the stalls area, but was terrible for action shots.

Buffering in his stall Friday night 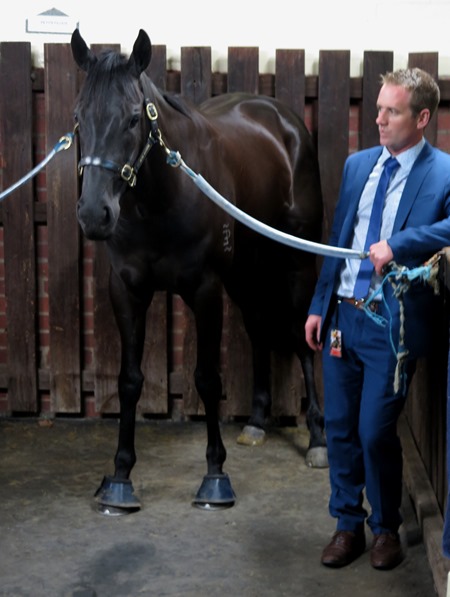 I got to Moonee Valley in time for the running of Race 3, the Group 2 Stocks Stakes for mares over 1600 metres and watched it from the fence on the public lawn.

It was won by the unfancied Fenway  from May’s Dream and Scratchy Bottom. 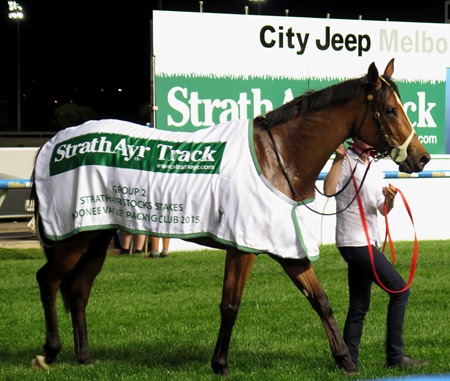 As there was quite crowd of drunken football fans at the meeting, I decided to check out another side of the course which is close to the winning post and found it an excellent spot for taking photos, and much quieter and more civilised than the public lawn.

A pity it was night time, it would be a good spot in daylight. 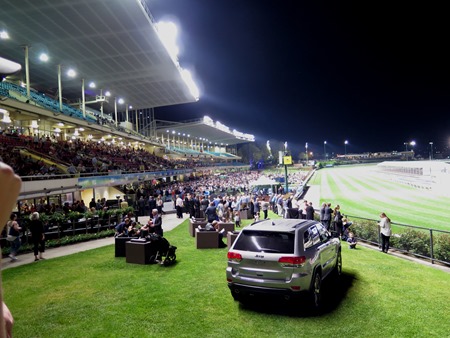 View of Moonee Valley from right hand side of main building

The fourth race was the 55 Second Challenge, a speed test over 955 metres and Reldas was the winner, running 55.05 seconds. 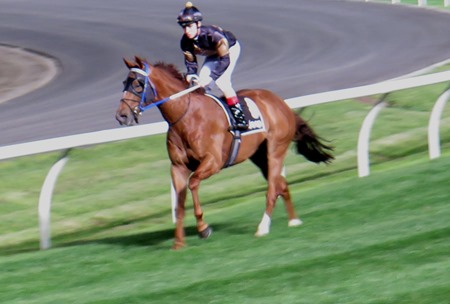 The Stutt Stakes and the JRA Cup followed before the feature race and they resulted in Sovereign Nation beating Get The Picture and Gredington in the Stutt Stakes, and Escado coming in at big odds in the JRA Cup ahead of Magnapal and Velox. 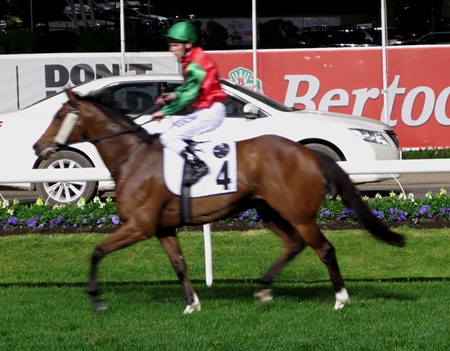 Escado returns to scale after winning the JRA Cup

Buffering proved that old timers can still cut the mustard, winning the Moir Stakes by half a length from Ball Of Muscle with Angelic Light running third. Buffering led, as was expected, for most of race and had enough in the tank to kick away and hold off the swoopers to the line. Petits Filous raced close to the pace for most of the race, but faded to finish 10th, the hard track (a firm 2) being not to her liking, according to her trainer. She will be spelled until the autumn.

Bright sunshine was the lighting challenge at Flemington on Sunday, which can be as much as a problem as fluoro at night meetings. I have noticed in the past that on really bright days, the LCD screen turns black and you can’t see what you’re shooting. To solve this problem I purchased a sunshade for the G16 and tried it out on Sunday. Thankfully it worked.

I was obliged to get to Flemington fairly early as trains to the racecourse ceased operating at 12.40pm, so it was a long afternoon. Luckily there was plenty of exciting racing action, so the time sped by very fast.

Just missing Race 2 on program, I was in plenty of time to watch the Group 2 Gilgai Stakes where top sprinter Chautauqua was the main attraction and naturally the hot favourite.

It was a really interesting race. For a while there it almost seemed as if Chautauqua couldn’t win, boxed in by other horses on all sides as they sped down the straight. He managed to find an opening at the last minute and ended up winning by a length from Delectation with Knoydart running third. The next race on the card was the Listed UCI Stakes for Derby bound three year olds, run over 1800 metres.  Ayers Rock, whose trainer declares is going to win the Victoria Derby, won the prize at very long odds, beating race favourite, Tivaci, and Akaashef by a length or so.  Ayers Rock was ridden by Darren Gauci, who as a young jockey back in the 1980s was a household name, but is overshadowed these days by the current crop of star jockeys. 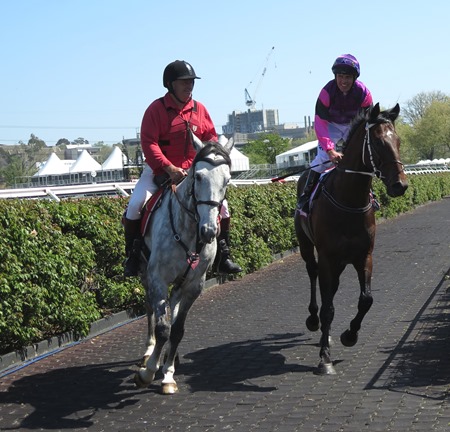 Race 5 was the Group 2 Edward Manifold Stakes for three year old fillies and I must say Badawiya looked good winning the race by two lengths from nearest rival Sacred Eye with My Poppette a further three lengths away in third spot. 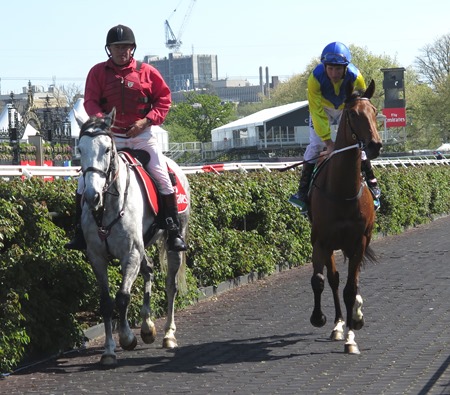 Badawiya returns to scale after winning the Edward Manifold Stakes

It was particularly appropriate that Let’s Make Adeal won The Bart Cummings, a race named in late great trainer’s honour, run over 2520 metres.  The winner gets automatic entry into the Melbourne Cup, so Let’s Make Adeal will get the chance to emulate her grand dam Let’s Elope who won the Cup in 1991 for Bart Cummings. 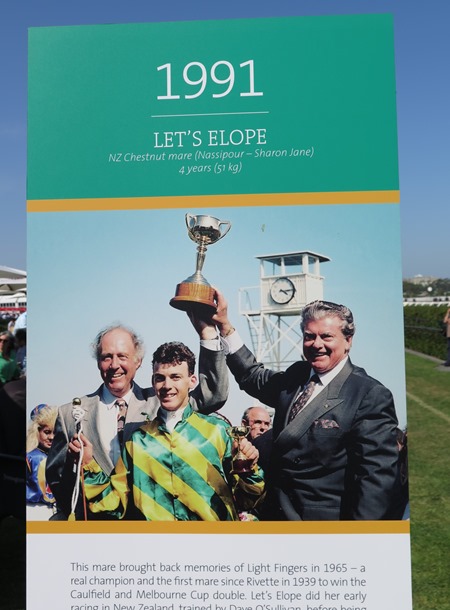 Sign in Bart Cummings Walk of Fame for Let’s Elope

The barriers for the race are set up just by the Clock Tower, so I had a rare chance to snap a photo of the barriers from the back. 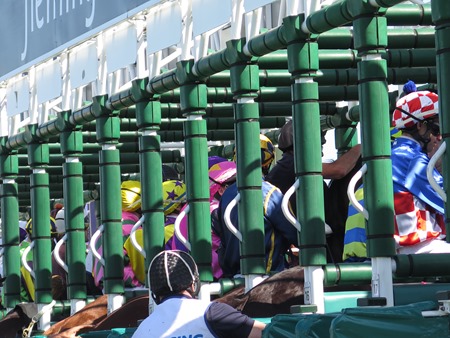 Starting gates for The Bart Cummings 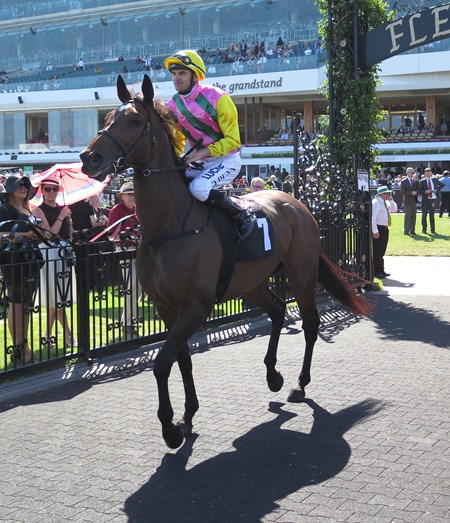 It is quite rare for Victorian Derby winners to return the next Spring and win a major race. One of them who did was Efficient who won the 2006 Victorian Derby and the 2007 Melbourne Cup. He was present at Flemington on Sunday to lead the Turnbull Stakes field out, but I caught up with him in his stall soon after I arrived at the track. 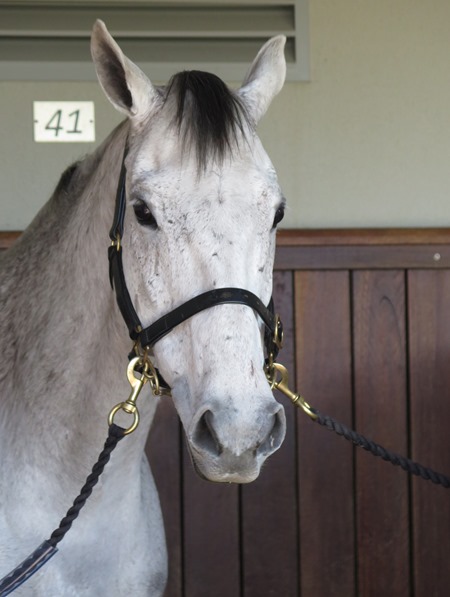 Efficient in his stall – finally a nice head shot 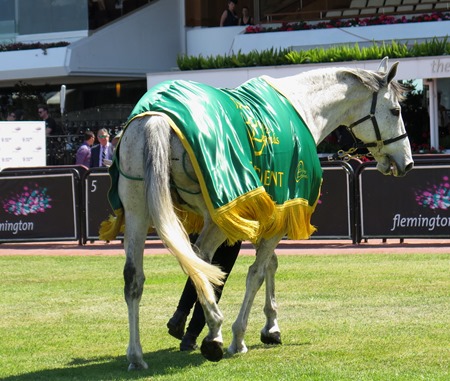 Efficient parading in the mounting yard

Last year, the Chris Waller trained Preferment won the Victorian Derby and he returned to Flemington for the first time since then on Sunday and took out the Group 1 Turnbull Stakes, beating his stalwart stable mate Royal Descent by a nose. Last year’s Oaks winner Set Square ran third. It was an appropriate win for Preferment considering that his sire, the great Zabeel passed away last week. 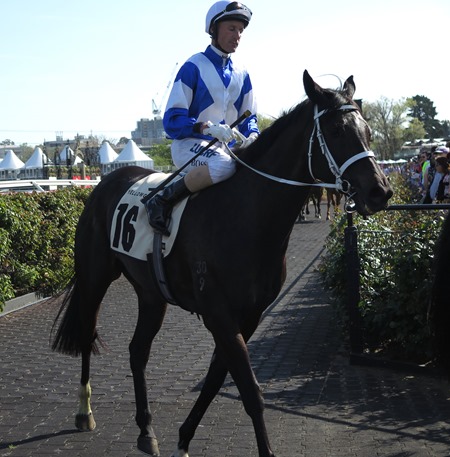 Royal Descent returns to scale after the Turnbull Stakes 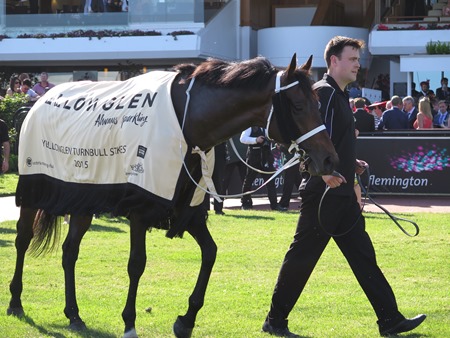 It had been a long but enjoyable day in the sunshine, so I called it quits after the Turnbull Stakes as the trains had started running again to take race patrons back to the city.

Sydney had their big race day on Saturday, and I listened to the meeting on radio, as Racing NSW’s video coverage was not working on my computer.  Amazingly, favourites won in eight of the nine races on the program. The Group 1 races resulted in wins for Winx in the Epsom, Speak Fondly in the Flight Stakes, and Magic Hurricane won The Metropolitan.

Next Saturday is Caulfield Guineas Day at Caulfield with four Group 1 races on the program.
Lankan Rupee will be making his first appearance for the Spring in the Group 2 Schillaci Stakes.
His great rivals, Chautauqua and Terravista have already kicked off their Spring campaigns with wins, so hopefully Lankan Rupee can do likewise. No doubt they’re all fated to meet in Darley Classic on Emirates Stakes Day if not sooner.