Winx parades along the rail after winning the Cox Plate

Up until last weekend, the 2015 Spring Racing Carnival seemed to be  somewhat underwhelming, lacking what I call the WOW factor.  There have been few dominant performances and the Group 1 races were won by various horses in blanket finishes most of the time.

It is remarkable that the Moonee Valley mini carnival held over a night and day delivered what we racing fans crave, the emergence of two equine super stars, one a sprinter, the other a stayer.

I did not attend the Manikato Stakes night meeting on the eve of the Cox Plate, but I watched the feature race on my computer and was suitably wowed by Chautaqua’s  last to first win.  He raced at the tail of the field and at the turn into the straight muscled himself into the race and quickly overtook Srikandi, sailing on to win by two lengths. Srikandi hung on for second, a nose in front of Rebel Dane. It was a stunning performance by the grey speedster, admittedly not all that surprising after witnessing his first two runs this Spring.

Winx became only the eighth filly/mare to win the Cox Plate in its 93 year history and her win was just as spectacular as that of Chautauqua. She comprehensively blitzed the field to win by over four lengths, breaking the course record set by Might and Power in 1998.

On to my day at the Cox Plate.

Because the bus I catch to Moonee Valley was overdue by an hour – ironically delayed by the traffic at the racecourse - I reached Moonee Valley much later than I originally anticipated, shortly after 3.00 pm, so it was a relatively short afternoon at the races, though it took me two hours to get home.

I’d just missed Race 5, so I spent some time checking out the stalls area before finding a spot on the public lawn to watch the next race.

The first Cox Plate runner I came across was Fawkner… Fawkner in his stall

…then found the three International entrants side by side in Stalls 104 to 106. 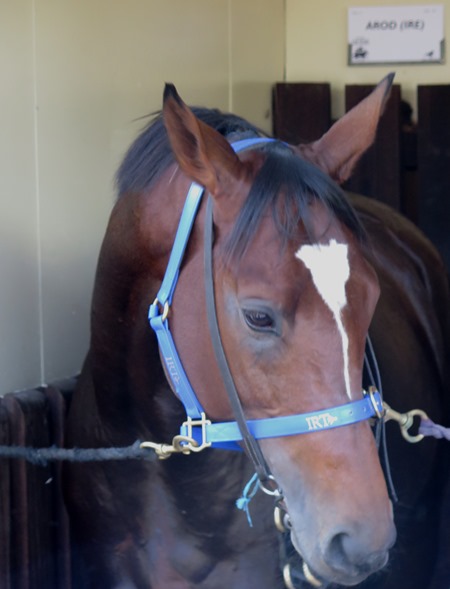 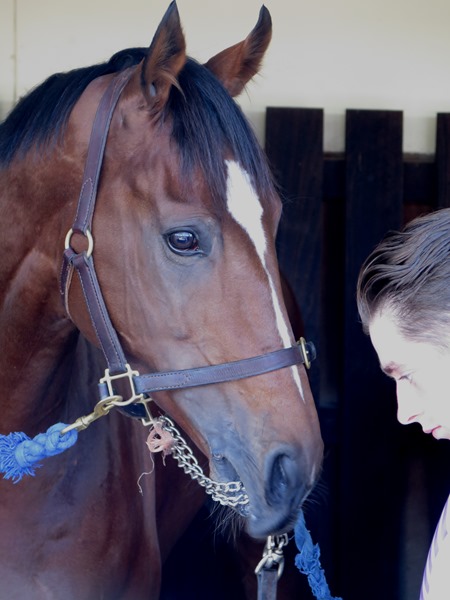 Highland Reel – chewing on his lead – from Ireland 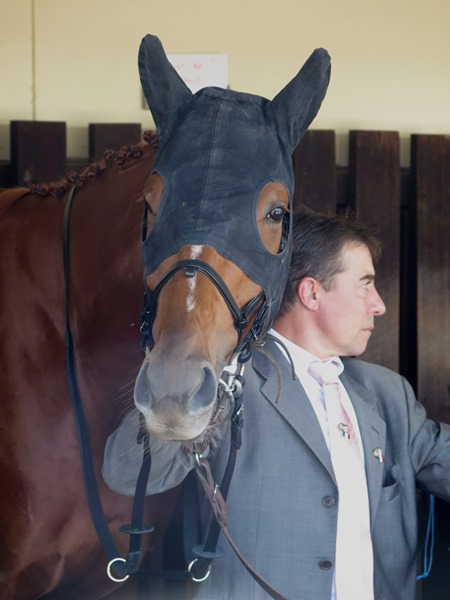 And more of the locally bred contenders… 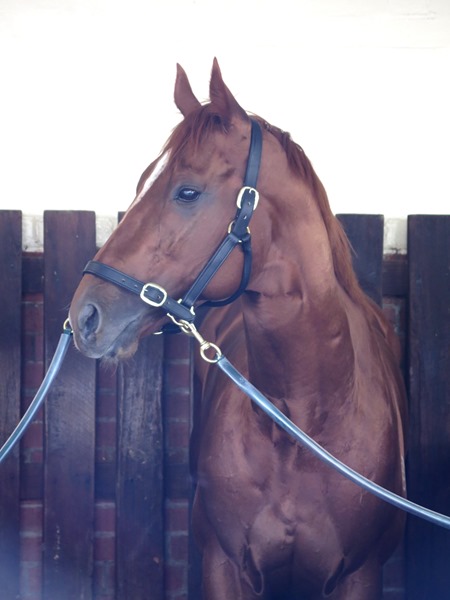 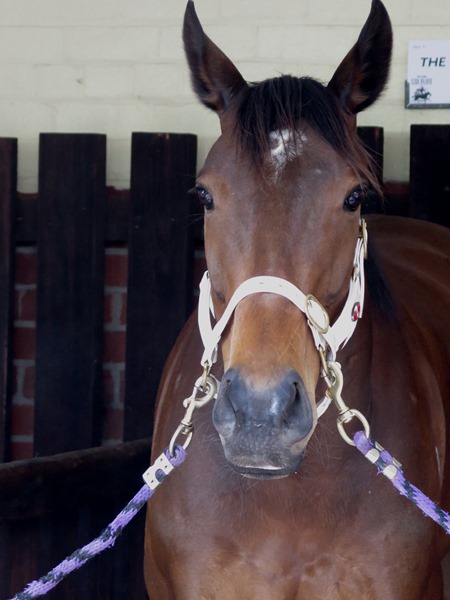 …and old Precedence being kitted out for the next race. 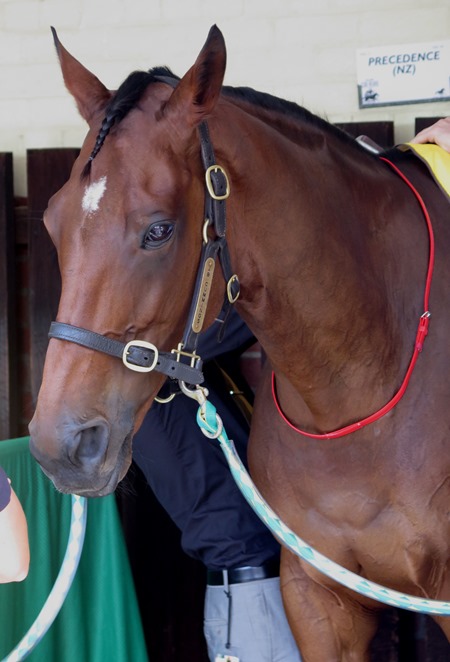 Race 6 was the Moonee Valley Gold Cup for stayers over 2500 metres, so I finally ventured out onto the public lawn up the top end of the straight where it was reasonably uncrowded and you could easily get a possie on the fence.

Last year it was won by Prince of Penzance and the year before by old Precedence. Both were in the field, hoping to gain a start in the Melbourne Cup. The United States, a good looking flashy chestnut with a big white blaze on his face, overtook race leader Prince of Penzance in the straight to win. Bohemian Lily finished third. 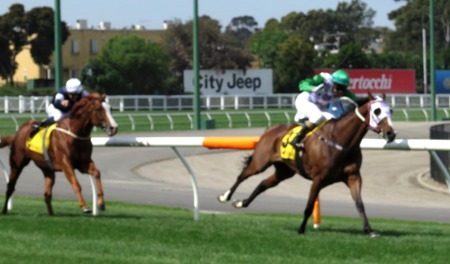 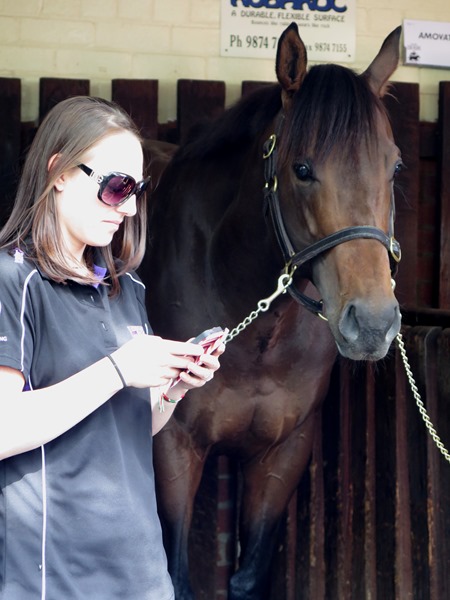 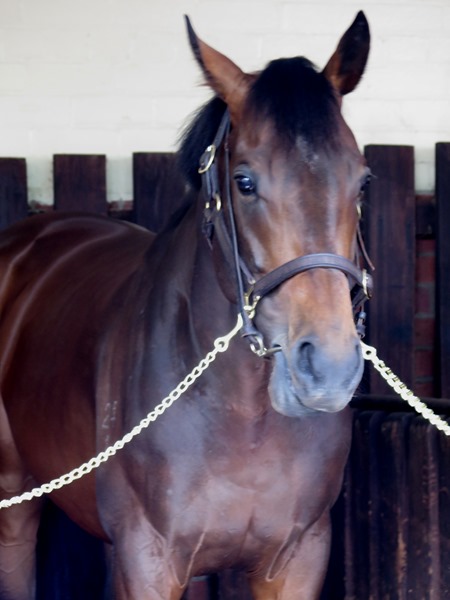 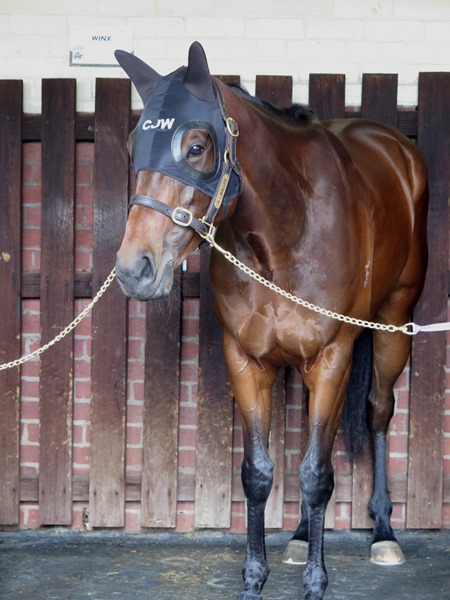 Race 7 was the Group 2 Dilmah Exceptional Teas Vase, which is for three year olds and is run over the same distance as the Cox Plate (2040 metres)

It is very rare for fillies to be entered in this race, let alone win it, but Jameka started as favourite and justified her favouritism by winning the race by a length from race leader Shards with current Victorian Derby favourite Tarzino running third. 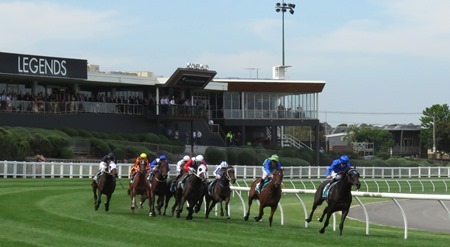 There was only one more race to run before the feature and this was the Crystal Mile. Lucky Hussler was the hot favourite, but he only managed to run third. Turn Me Loose, trained by Murray Baker and ridden by Caulfield Cup winning jockey Opie Bosson,  led from the start to the finish and was never headed, winning by half a length in the end from Bow Creek. 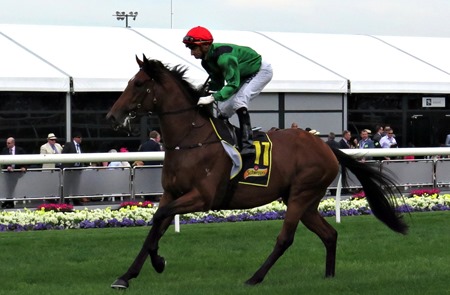 Turn Me Loose on his way to the barriers 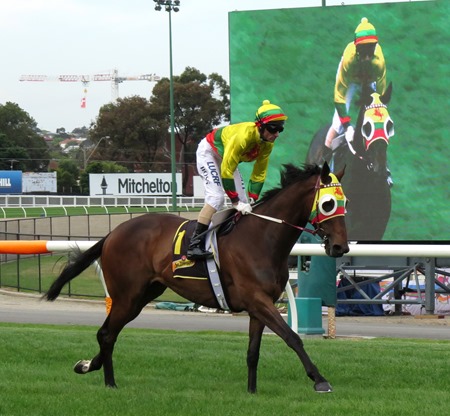 Lucky Hussler on his way to barriers

My sole bet of the day was on Lucky Hussler to win, so no collect.

With 40 minutes remaining to the running of the Cox Plate, I decided to try and find a spot closer to the action on the fence and managed to squeeze into a good position close to the finish line behind the band stand.

The 2015 actual Cox Plate was carried out onto the track, preceded by 1990 Cox Plate winner Better Loosen Up. 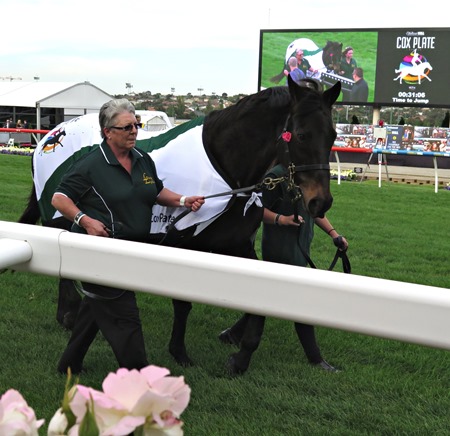 The Plate was driven up the straight in a jeep, carried by Better Loosen Up’s old trainer David Hayes. 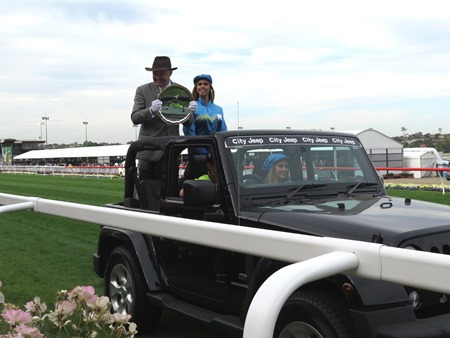 After that bit of pomp and ceremony, vintage Aussie rocker, Daryl Braithwaite, with band, sang a rendition of his famous song The Horses, an appropriate choice considering the setting and occasion. 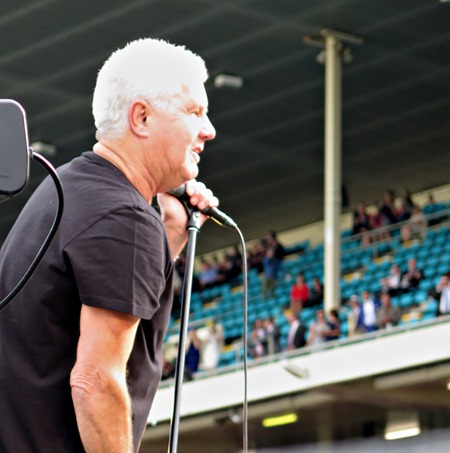 The crowd, considerably under the weather by this time, were enraptured, singing and dancing along to the song and of course taking photos on their iPhones. 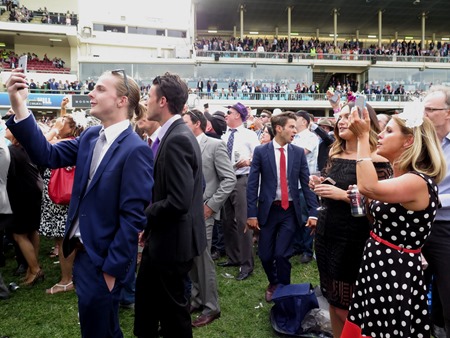 And finally the horses were released onto the track to head up to the starting gates at the top of the straight. I managed to get a few photos of them as they flashed past. 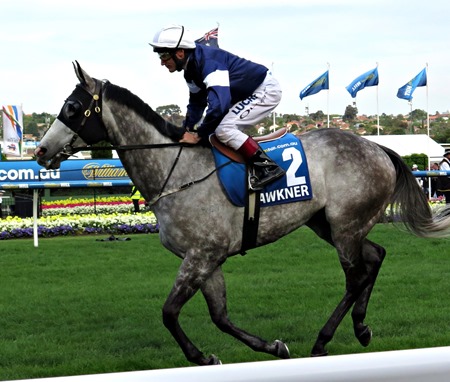 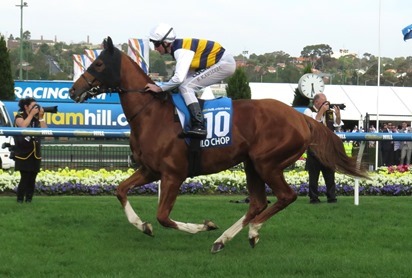 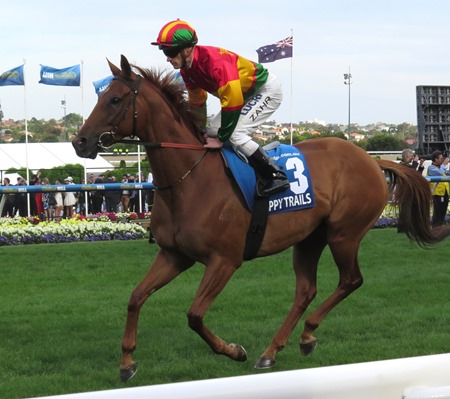 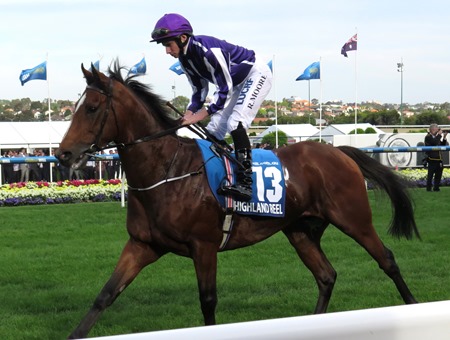 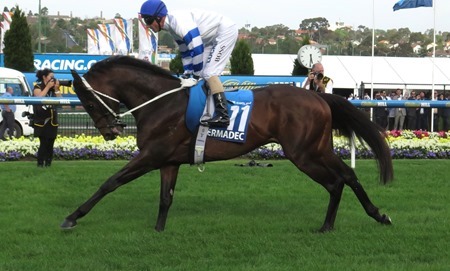 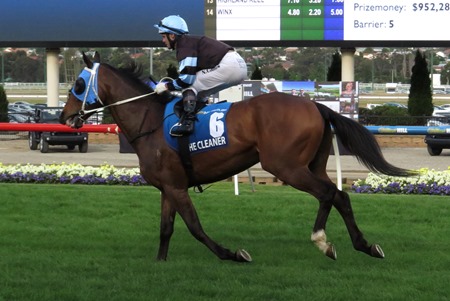 The Cleaner was allowed to take his usual leading position in the field and Winx raced much closer to the pace than she usually does, trailing The Cleaner along the rail.  Hugh Bowman’s ride was a classic and his timing spot on. As soon as The Cleaner moved out from the rail, Bowman shot Winx through the gap and the rest is history.  She drew further and further away from the rest of the field as they raced down the straight and won by over four lengths from Criterion with Highland Reel a further one and half lengths back in third spot.

My burst mode sequence of photos in the final stages of the race have Winx, then daylight, then Criterion and Highland Reel. 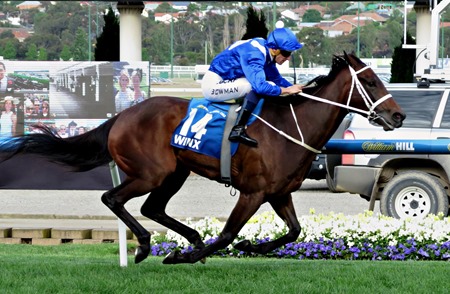 Winx – centre stage burning up the straight to the winning post 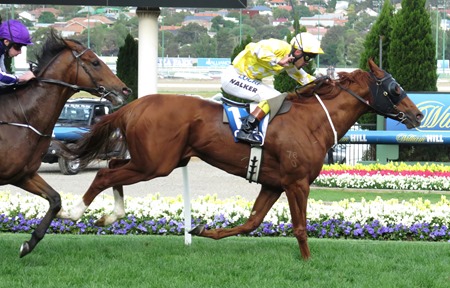 Many people were reminded of the great New Zealand mare, Sunline, in Winx Cox Plate win, myself included. Winx has now won five races in succession since May this year, three of them at Group 1 level. How can we now deny that she is not a super star? 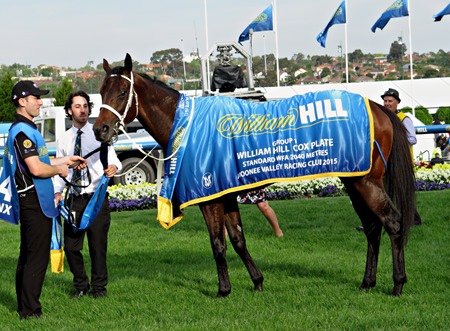 Winx rugged and posing for the press

I’m thrilled that I got to see her win the Cox Plate, and it made the tiresomeness of getting home worth it.

Regarding the trip home; the Moonee Valley Bus Line service I generally catch failed to show up on the bus stop. Myself and several other patient persons waited an hour, thinking it would eventually turn up, but finally we all gave up and tromped up to Moonee Ponds Junction to catch another form of transport.

I opted for the Moonee Ponds to Clifton Hill bus, which was on the point of departure. I’d never travelled on this bus before, but always wondered where it went to in Clifton Hill, so the trip was enlightening and will offer a viable alternative to the usual bus should I wish to travel home from Moonee Valley, as it’s only a short walk home from the Queen’s Parade bus stop in Clifton Hill. 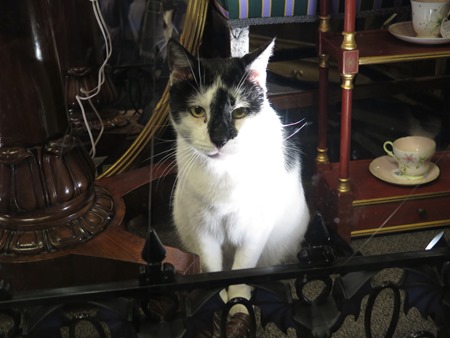 Next Saturday is the first day of Flemington’s blockbuster carnival, Derby Day no less, with four Group 1 races on the program.