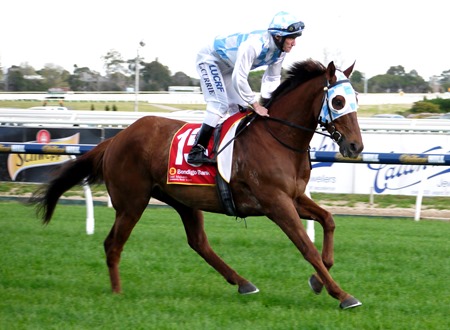 Magnapal – heading to the gates prior to winning the feature race

I couldn’t be bothered previewing the races last week, but I did attend the race meeting at Caulfield on Saturday, and enjoyed the outing despite it being a fairly low key event.

It was worth it to go along and see my old favourite, Apache Cat, present as the special guest from Living Legends. They’d set him up in the Kid Zone – well sheltered from the ankle biters in an enclosure adjacent to it. 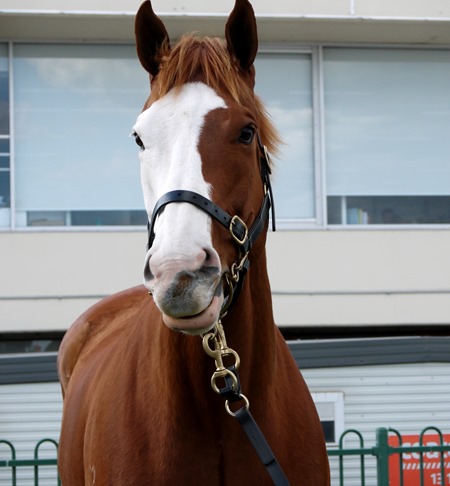 He loves his photo being taken and posed beautifully for the above shot and didn’t mind a pat either.

The charity day mentioned in the title of this post refers to the cost of entry to the course, where 80% of it would go to a charity of one’s own choice, which could be selected from at list at the ticket booth.

I took my time getting to Caulfield as the more interesting races were on later in the afternoon, so I arrived around 1.45pm, in time to see Race 4, the Bendigo Bank East Malvern Handicap, for mares over 1400 metres.

A dreary old man who seems to haunt the races – I see him practically every time I attend any race meeting – was ear bashing one of my photographer friends  as I joined her at the fence.  One thing in the old codger’s favour was that he’d picked the winner, KayJay’s Joy as one of his five bets and she earned him $9.50 for the win.  She beat home Danestroem and Mossbeat. 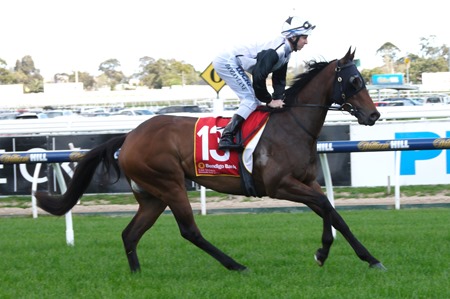 KayJay’s Joy on her way to the barriers 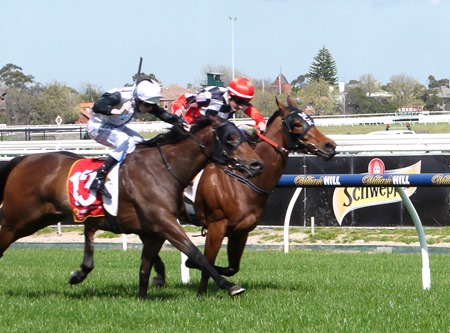 Killing time to the next race, I went off to the stalls area to see who had arrived -  not many of the feature race contenders.

Race 5, the MRC Foundation Plate looked mildly  interesting as it had several  Guineas bound fillies in the field, such as Giulietta and Don’t Doubt Mama.  The latter ended up winning, with Sacred Eye running second and Thames Court taking third.

Race 5 down the straight to the finish line

In between the Melbourne races, I did manage to watch the action at Randwick on screens around Caulfield. I noted with interest that Rebel Dane, who has always promised much, yet failed to deliver, finally won.  He has had a throat operation since his last race appearance in autumn, which appears to have done the trick as far as his performance on the track is concerned.

The Canberra wonder horse Fell Swoop was running in Race 6, the Listed Testa Rossa Stakes, so I decided to test my luck on the punt and have a bet on him. He started favourite at odds of $2.50, though I managed to get $2.70 from the Bookies.

Fell Swoop showed great tenacity to win the race, so I was glad I hadn’t jinxed him with my bet.  Charlie Boy ran second and Java third. 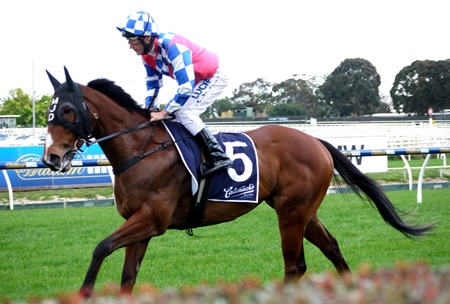 Fell Swoop on his way to the starting gates – note the blinkers & ear muffs, which are taken off at the barriers. 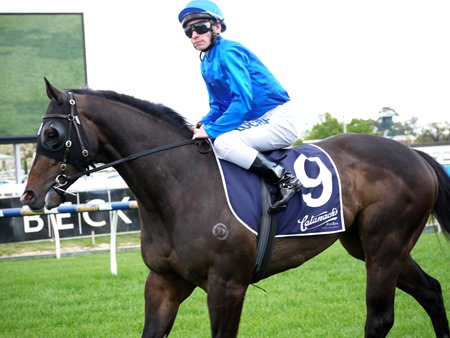 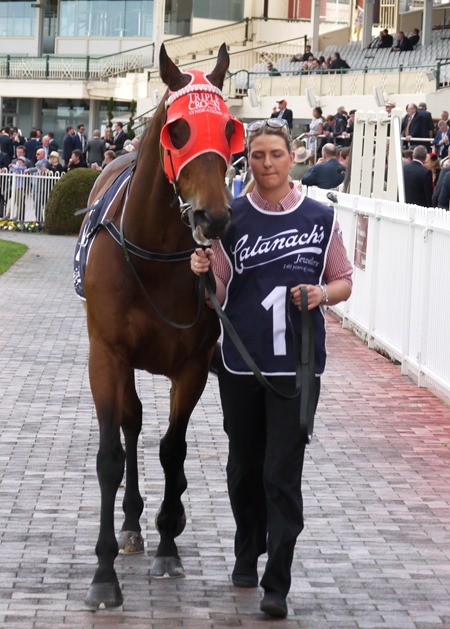 Race 7 was the Group 3 William Hill Sprint Series Heat 2 Stakes, for mares run over 1200 metres.  I decided to have a small bet on Wawail who had great first up  form, having never been beaten when fresh. Alas she was hampered from running in the straight with a wall of horses blocking her progress and finished second last. Politeness and Griante stormed down the outside to run the first two places with Jessy Belle running third. 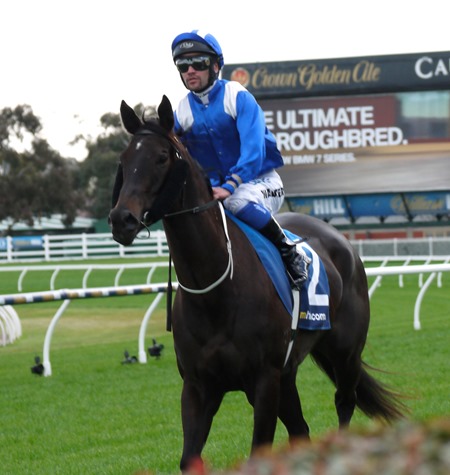 Wawail on her way to the barriers

The feature race of the day was up next, the Group 3 Bendigo Bank East Malvern MRC Foundation Cup, formerly known as the  Naturalism Stakes. It is a race over 2000 metres and the winner qualifies for the Caulfield Cup.

A good field of 16 starters were contesting it. The United States who was narrowly beaten by his stable mate Chance To Dance at Moonee Valley a fortnight ago, was the favourite.  I thought that with his light weight he was pretty much a certainty, but as is the fickle hand of fate as far as horse racing goes, he was beaten by the narrowest of margins by Magnapal, whose form I had totally overlooked. Genuine Lad finished third. 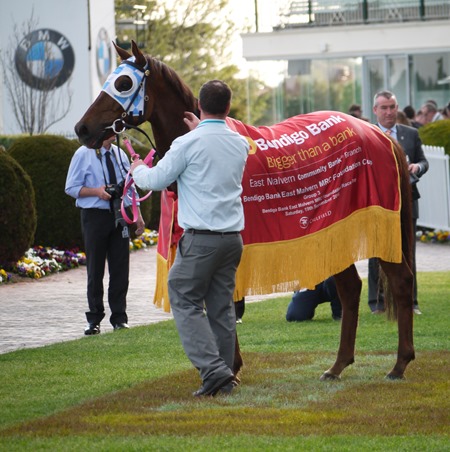 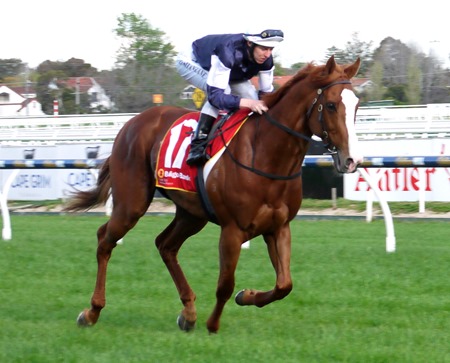 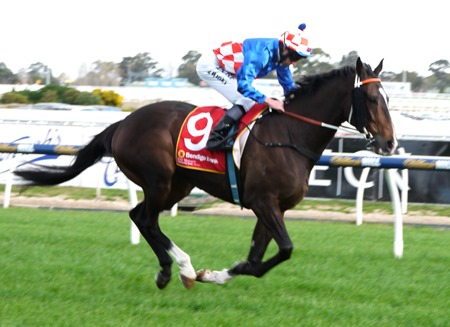 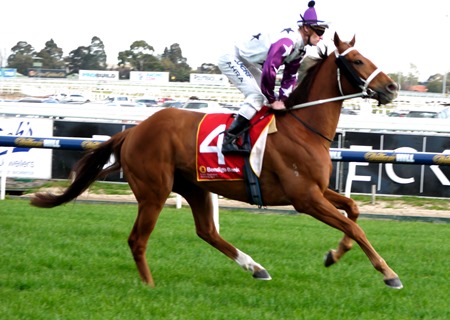 Race 8 down the straight – Magnapal & The United States go head to head to the finish line.

I called it quits after the Naturalism Stakes and headed home after collecting my place winnings on The United States.

Though it wasn’t as exciting as the previous two meetings I’ve attended, it was enjoyable being out in the Saturday sunshine of early Spring and watching  beautiful equine athletes in action.

The feature race at Randwick, the Group 1 George Main Stakes resulted in a win for Kermadec with the ever dependable, but unlucky, Royal Descent running second. The Gai Waterhouse trained Pornichet finished third.

Next weekend the racing action is again at Caulfield and features two Group 1 races – the Underwood Stakes and Rupert Clarke Stakes, as well as two interesting Guineas Preludes for three year olds.