A Cool Day at the Valley 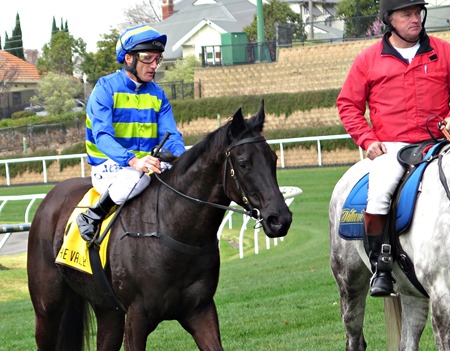 Actually, the weather on Saturday afternoon was not as dire as forecast; it was cold and overcast, but at least it didn’t rain and there was no wind.

Making the effort to attend the meeting at Moonee Valley was worth it to witness promising filly Petits Filous confirm her potential with a comfortable 2 length win in the first race.

She’s a dark brown filly and appeared calm in the mounting yard, belying the meaning of her name which translates as “little rascals”.

I arrived at Moonee Valley in time to watch the fillies parade pre-race and get photos of the main contenders. 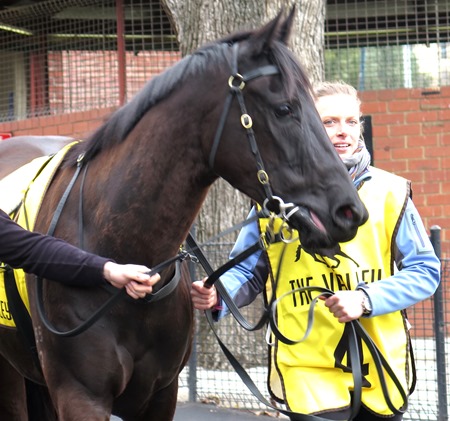 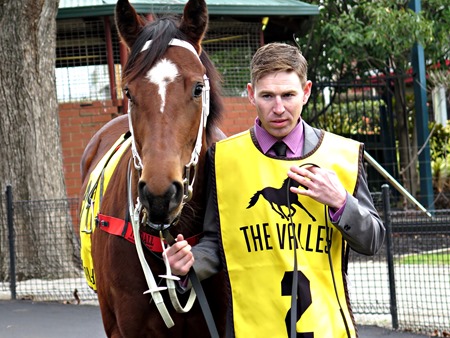 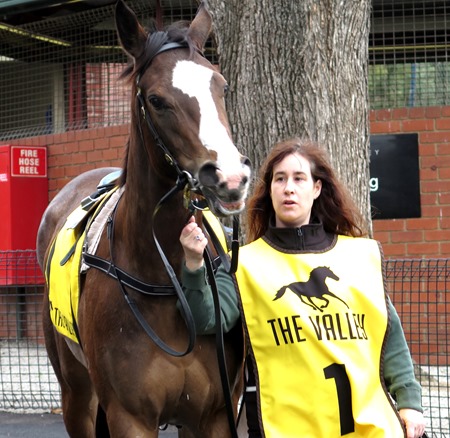 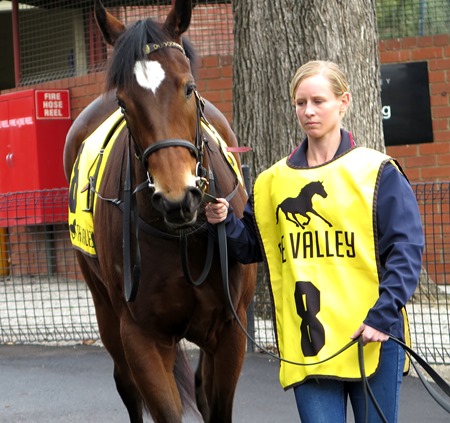 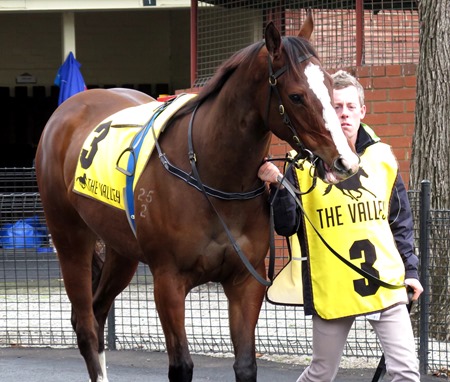 Petits Filous raced off the speed in about fourth spot, allowing The Big Dance to take up the running with Haybah. Approaching the turn Petits Filous moved up, and on straightening overtook the leaders to cruise to an easy win, two lengths ahead of Stream Ahead, with Grisbi’s Run finishing third, four lengths away. The Big Dance and Haybah finished out of the places.

In fact The Big Dance, when being pulled up after the post, threw a wobbly, dislodged her jockey, went through the running rail and fell.  Fortunately, both horse and jockey were not seriously injured, though The Big Dance will not race again this spring.

Race 1 – down the straight – Petits Filous is several lengths ahead of the rest of the field.

The races were spaced 35 minutes apart, so the three hours I spent at the track sped by pretty fast.

Race 2 was another sprint over 1000 metres for colts and geldings, and hot favourite was Attack The Line, who was in fact having his first start.  He’d been spruiked by his trainer as the best horse he’d put a saddle on and so was expected to perform well. Alas that was not the case. He finished a well beaten 7th. Godolphin gelding Demonstrate was the winner with outsiders Star Planet and Destiny’s Reward filling the minor places. 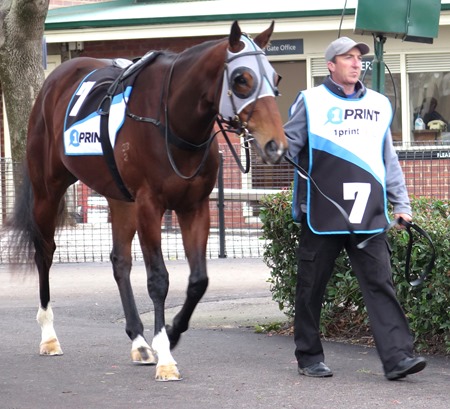 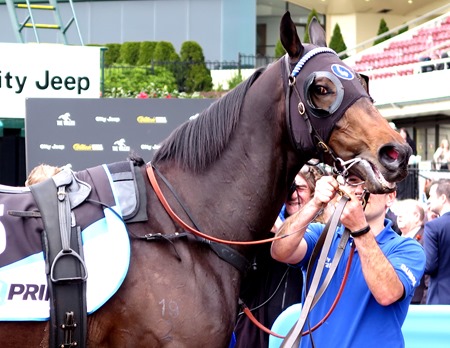 Race 2 – down the straight - Demonstrate holds a narrow lead over Star Planet.

Yet another 1000 metre sprint was third up on the card, this being an open handicap, the Melbourne Signage Concepts Handicap.

Il Cavallo started the favourite and led through most of the race, however he was upstaged by veteran galloper, the 9 year old Our Nkwazi and Hard Romp. They all hit the line together so only a short margin separated the first three.

Interestingly, out of three 1000 metre sprints, the fillies race first up was run in the quickest time. 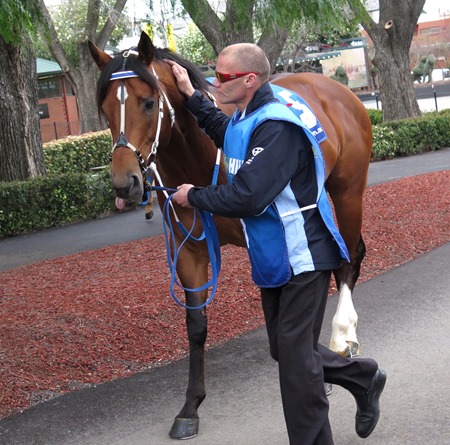 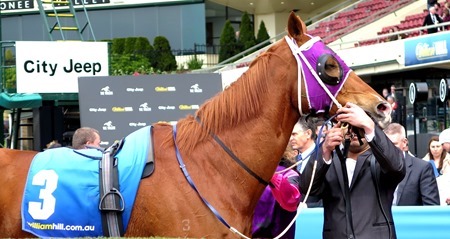 Race 3 – down the straight. Il Cavallo leads with Hard Romp (orange silks) and Our Nkwazi (purple & pink silks) running him down on the outside.

Race 4 was the Mitchelton Wines Handicap, a race for fillies and mares over 1600 metres.

I was interested in seeing how Spirit of Heaven would go in this. She ended up finishing second behind First Bloom with race favourite Dig A Pony running a flashing third from the rear of the field. 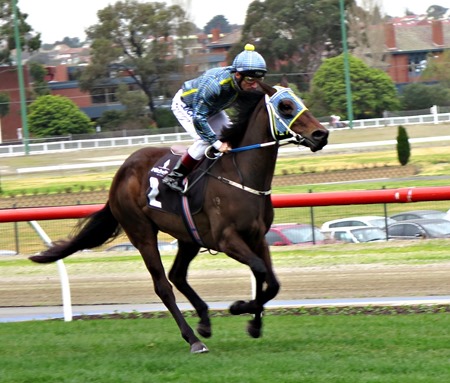 Spirit of Heaven on her way to the barriers 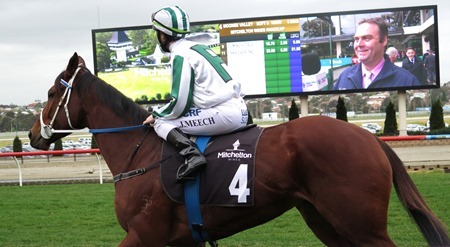 Dig A Pony on her way to the barriers 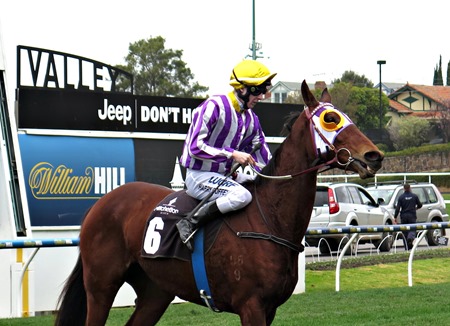 Race 4 – down the straight – First Bloom is about to take the lead.

Damian Oliver, who stylishly rode Petits Filous to victory in the first race, achieved a double in Race 5 with an equally skilful ride on Bagman who turned 9 years old on the day.

As the race, the Jockey Celebration Day Handicap was over 2040 metres, the starting gates were at the top of straight. So thence I went to get a shot of the start.

Jockey Celebration Handicap start at the top of the straight

Bagman, made it two consecutive wins from two starts over the past fortnight, beating Lord Durante by ¾ length with Diametric running third. 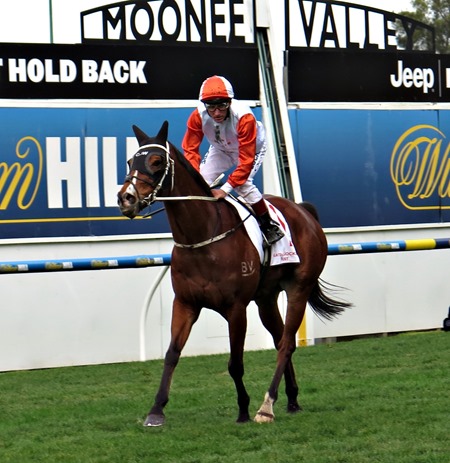 Bagman returns to scale after winning the Jockey Celebration Handicap

Tawteen, who I visited in her stall earlier in the afternoon was scheduled to run the next race, the Ranvet Handicap. She was being frisky in her stall and toey when being paraded before the race. 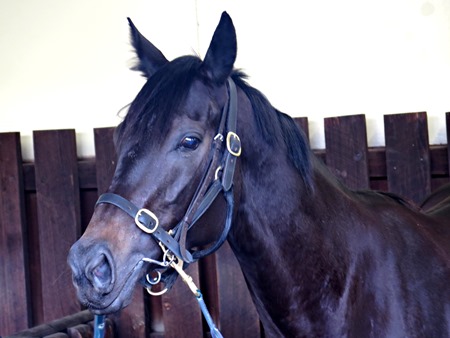 She led through most of the race, but was overtaken in the straight by Tasmanian sprinter Valiant Warrior and Mighty Like who confined her to third place.

Tawteen (inside) Mighty Like (middle) and Valiant Warrior (outside) fight out the finish down the straight. 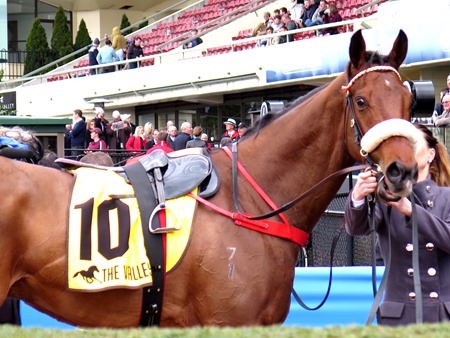 Valiant Warrior in the winners stall

I called it quits after Race 6 and wended my way home. I only had two small bets, both unsuccessful, for the afternoon, but was nonetheless satisfied with a pleasant, uncrowded day at the races.

The serious racing kicks off in a couple of weeks with the first Group 1 race of the season, the Memsie Stakes, scheduled for Saturday 29 August at Caulfield.  I will probably attend the PB Lawrence Stakes meeting before then at Caulfield on 15 August, which also includes the Quezette Stakes where Petits Filous is mooted to have her next start.