…until the Ryan Adams concert at the Forum Theatre on Sunday night. 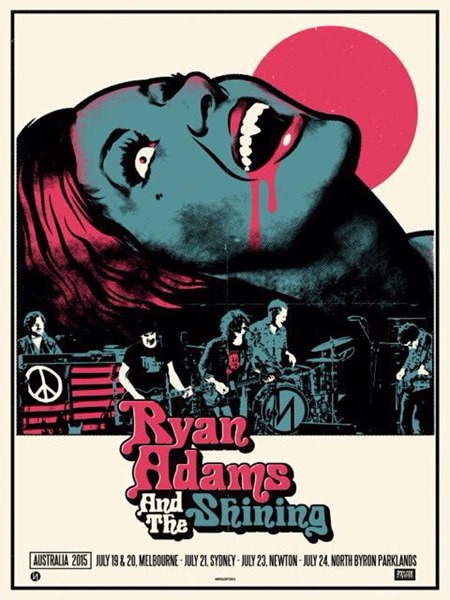 Needless to say, I’m very much looking forward to the concert, which has Jenny Lewis as the support act. I’m also going to the second concert on Monday at the same venue.

I know this is not the sort of thing I would normally do, but I originally purchased a ticket for the first show at the pre-sale. However, the friend I was planning to go with was too late to obtain a ticket as they sold out in a flash, so she got tickets for both of us to the second show. I was initially intending to sell my extra ticket, but changed my mind and decided to attend both concerts, Ryan Adams after all being my favourite singer-songwriter.

Ryan Adams is currently in New Zealand and has created something of a Twitter sensation by championing a stray kitten that he came across in a cemetery when walking off his jet lag his first night in Auckland. His twitter campaign has resulted in the cat being rescued.

I find it endearing that he has a special “speaking to cats” voice.

The concert poster above is typical of his latest tour posters, all of them having a supernatural theme (reflecting the name of his band, The Shining), but I’m a tad disappointed that the Aussie one does not feature cats.

The last time I time I saw Ryan Adams live was in March 2012 when he performed a solo tour. It was a wonderful concert that highlighted the beauty of his voice and music. I recommend listening to his solo live concert record “Live at Carnegie Hall”. It’s available as a 6 LP Vinyl set (with 42 tracks), or a ten song CD.

Melbourne is currently in the throes of a very cold snap, so it will warm the cockles, not to mention the body, to experience the special magic of  Ryan Adams live in concert again.