A Harbinger of Spring–Racing at Moonee Valley 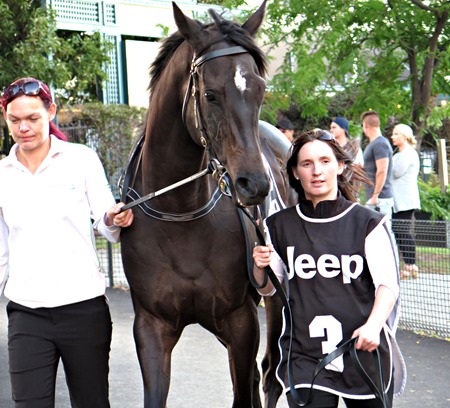 Tawteen kicks off her Spring at Moonee Valley tomorrow.

Though you wouldn’t know by the weather, Spring is just round the corner and it means that a new season of first class horse racing is impending.

Tomorrow is the birthday of southern hemisphere racehorses, and a quite interesting race meeting is scheduled at Moonee Valley to mark the occasion.

Having renewed my Moonee Valley Season pass, I have a hankering to return trackside to take in some racing action. The weather will most likely be awful, but I don’t intend to spend all afternoon there.

The most fascinating race on the card in fact is Race 1, the United Refrigeration Handicap for three year old fillies over 1000 metres.

I’m keen to get a glimpse of Petits Filous who won her first race at the Valley a fortnight ago on a heavy track by 6 lengths.  Shades of Black Caviar you’d think, but it’s really too soon to tell how good she really is. Tomorrow will give us some insight no doubt. She’s up against some other class fillies in The Big Dance and Haybah, the former winning her first race at Bendigo by a good margin, and the latter already with a Group 3 win under her belt. Stream Ahead also looks a chance having, like The Big Dance, won her debut race at Bendigo by 2 lengths.

Tawteen, who I have been following kicks off her spring campaign in Race 6, the Ranvet Handicap (1200 metres). She goes well fresh and has won at Moonee Valley several times so should be in the finish.

Speaking of classy fillies I’m looking to the return of Fontiton and Sistonic, who looked very promising early in the  autumn, but sustained injuries which ruled them out for the rest of the season. They’re not running tomorrow, but should appear in the near future.

Many of last spring and autumn stars are now retired to stud, so one is left scratching around for class acts to follow. Lankan Rupee will be back on the scene later in the spring, and his great rivals Chautauqua and Terravista  are also expected to return.  Also I’m really keen to see how Western Australian filly (now mare) Delicacy goes this spring. She has the rare distinction of winning two Derbies (WA & SA) and two Oaks (WA & SA) in the same season. Unfortunately she won’t be racing in Melbourne, but will be kept to her home state.

Other horses  I plan on following for the Spring are Alpine Eagle, Rich Enuff, Vancouver, Pride of Dubai, First Seal, Cosmic Endeavour, Mongolian Khan and Volkstok’n’barrell, along with old faves like The Cleaner, Catkins, Fawkner and Lucia Valentina. No doubt others will catch my fancy as the season progresses.