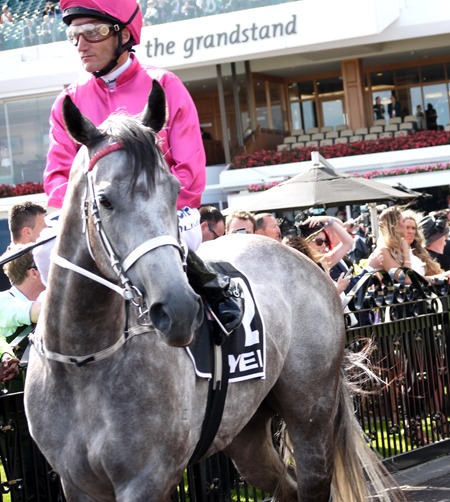 As one of my favourite racehorses, the sweet grey mare Catkins, is running in the final Group 1 of the Australian racing year, I thought I’d pen a post about the event.

Run this year on the Gold Coast when it is normally hosted by Eagle Farm, the Tatts Tiara (formerly run as the Winter Stakes) is a race over 1400 metres for mares and fillies.  I’m hoping that this year Catkins can finally win her first, well deserved, Group 1 race. She has contested quite a few and has always come up wanting, running second or third in most of those.

The Tiara has attracted a very nice field of classy mares and a few well regarded fillies, and Catkins main rivals are Srikandi who won the Stradbroke Handicap at her last start, Hazard  who beat Catkins in the Dane Ripper Stakes recently and Najoom, a spruiked filly trained by Gai Waterhouse, if she gains a start – she’s currently 2nd emergency. Others with a chance are Real Surreal, Solicit and Avoid Lightning. Naturally I’ll be barracking for the bonny grey mare –cross fingers, touch wood, she’ll win.

In the UK, the annual Royal Ascot meeting is in train. Several Australian horses are entered in various events. Two have already run – Criterion and Shamal Wind. They both finished unplaced, Criterion performing the better of the two finishing 5th in the Prince of Wales Stakes.

This weekend two more Aussie horses are to race in the Diamond Jubilee Stakes run over 6 furlongs (approx 1200 metres) on Sunday. Three Australian horses in the recent past have won this race – Choisir, Starspangledbanner and, most notably, Black Caviar.

This year’s great Australian hopes are the handsome Brazen Beau, who won the Group 1 Coolmore  Stud Stakes and Newmarket Handicap, and Australian Guineas winner Wandjina. Both are quality gallopers, who if they have acclimatised after travelling to the UK, could well do Australia proud.

Alas we will not see Brazen Beau in action in Australia again as he is to retire to stud after running in the UK. The same goes for Wandjina and quite a few of the Spring and Autumn stars over the 2014/2015 racing season, such as Dissident, Sweet Idea, Silent Achiever, Hallowed Crown, Adelaide, Earthquake and others who don’t spring to mind at the moment.

The racing scene in Melbourne doesn’t start to get interesting until late July in the build up to the Spring racing season’s early Group races.

Speaking of Australian horses who have been successful at Ascot, the news came today that the “people’s champ” Takeover Target passed away this morning. euthanised after a paddock accident. He was 15 years old.  He cost his humble taxi driver trainer a mere $1400 and won over $6 million in prize money.  He won races everywhere, at Royal Ascot, Singapore, Japan and all over Australia. His record stands at 41 starts for 21 wins, 8 of which were at Group 1 level & 10 places.

And the Tatts Tiara resulted in Catkins running unplaced, being forced back through the field early in the race.  Srikandi scored a rare double (Stradbroke/ Tiara) with a solid win, holding off Avoid Lightning and Lumosty who ran the minor placings.

Brazen Beau just missed winning the Diamond Jubilee at Ascot early this morning.  He gets a second chance in the July Cup at Newmarket on July 11.