Pride of Dubai– The Prince of Diamonds 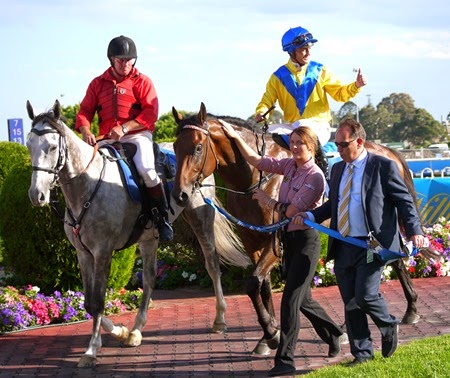 Pride of Dubai parades after winning the Blue Diamond Stakes

You might as well throw away the form guide, as favourites in the Group 1 events at Saturday’s meeting at Caulfield were all rolled.

Despite the disappointing results it was an enjoyable day at the races with the weather being kinder than the week before, a pleasantly warm day with alternate cloud and sunshine.

I arrived at the track around 2.00pm, in plenty of time for Race 3, the Angus Armanasco Stakes, where last start winner Sabatini was the warm favourite and was successful again, beating Fontein Ruby by a length with Samartested running third. 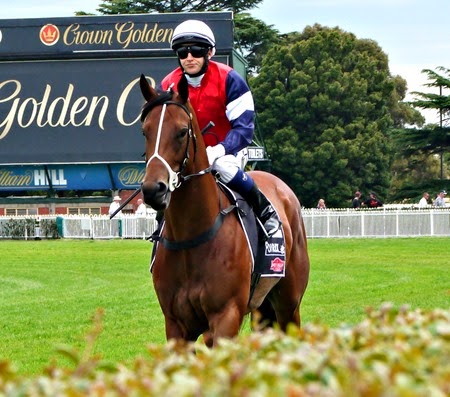 Sabatini on her way to the barriers 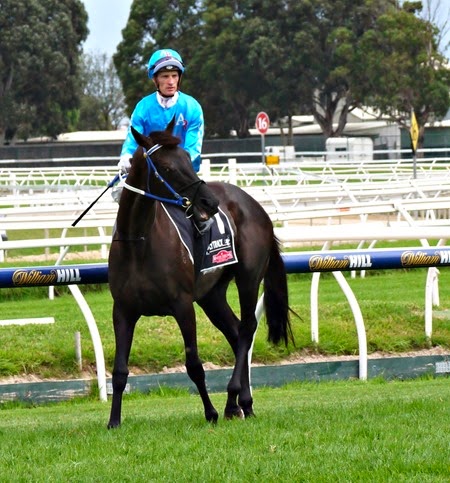 Race 3 down the straight – Fontein Ruby leads with Sabatini on the outside about to pass Samartested.

In my preview in my last post I completely overlooked Alpine Eagle in my assessment of Race 4, the Caulfield Autumn Classic. He is a South Australian colt with excellent form -  three wins from four starts – and very well bred by High Chaparral from a Zabeel mare Zephira .  He started as favourite, and running from the back of the field with an amazing burst of speed, narrowly won from Minnesinger and Firehouse Rock.

Race 4 down the straight – Firehouse Rock leads with Alpine Eagle still three lengths behind on the outside.

The first of the Group 1 races was next on the program, it being the Futurity Stakes. Dissident was the hot favourite, but he only managed to run third, rather stymieing his chances early in the race keeping up with race leader Driefontein and was flat at the finish. Smart mare Suavito swooped down the outside late and  went on to win by a length and a bit from Smokin’ Joey. 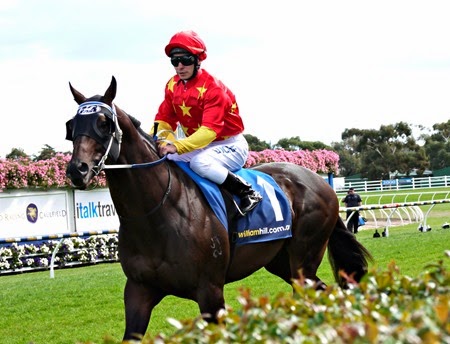 Dissident on his way to the barriers 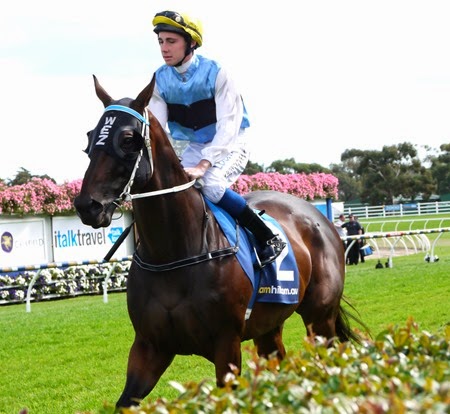 Smokin’ Joey on his way to the barriers

Race 5 down the straight – Dissident leads with Smokin’ Joey and Suavito about to overtake him on the outside. 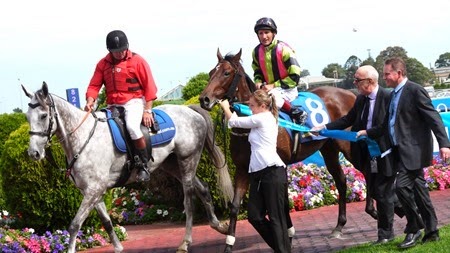 Suavito returns to scale after winning the Futurity Stakes

There was a great deal of interest in the next race, the Peter Young Stakes, due to the presence of 2014 Melbourne Cup winner Protectionist in the field. He’s a real good looker… 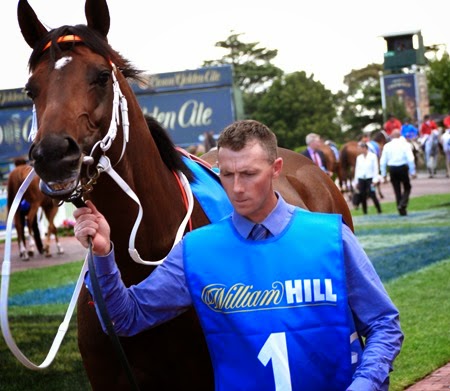 Protectionist in the mounting yard.

…however, despite starting favourite he failed to run a place, the race most probably being too short for him.

Mourinho who is in excellent form this autumn took out the race from the stalwart Happy Trails with Akzar running third. 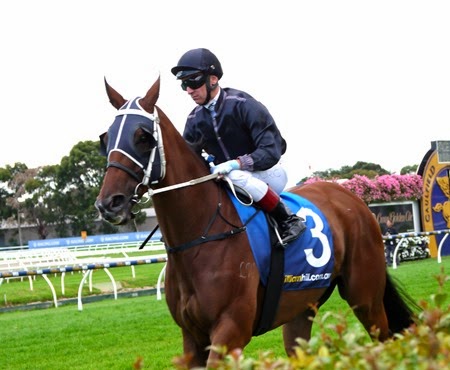 Mourinho on his way to the barriers 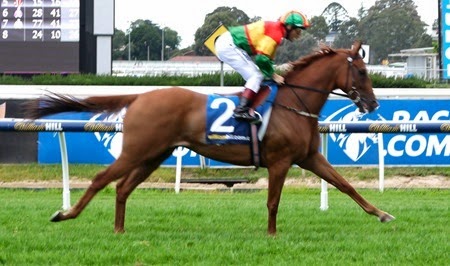 Happy Trails on his way to the barriers 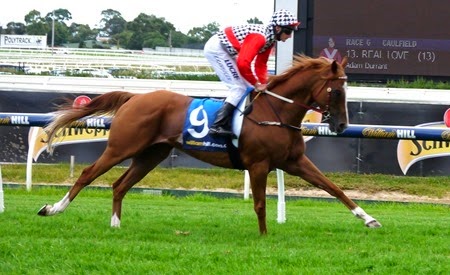 Akzar on his way to the barriers

Race 6 down the straight – Mourinho hits the front.

The Oakleigh Plate also ended in an upset with the speedy Shamal Wind winning her first Group 1, with the unfancied Under The Louvre running second and Fast N Rocking taking out third spot. I was hoping Earthquake, who started as favourite, would win, but she was very disappointing and finished 10th. She was wearing blinkers this time, the first time I’ve seen her do so. 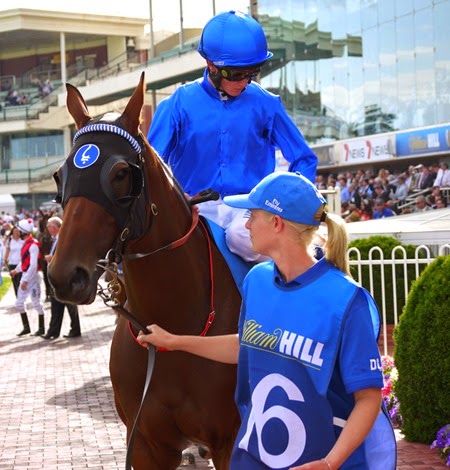 Earthquake in the mounting yard

Race 7 down the straight – Shamal Wind is five lengths from the lead on the outside in  the
red silks with white hearts.

Shamal Wind’s owner, dressed in a red suit with white hearts (to match the silks), was over the moon with her win as she paraded in the mounting yard. 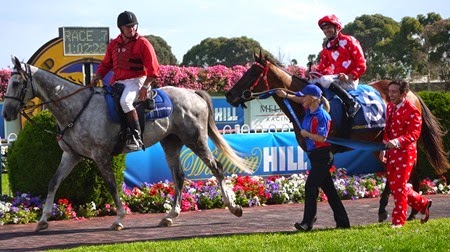 The afternoon sped by and before too long it was time for the feature, the Blue Diamond Stakes.

Either it was the late afternoon sun or my camera inadvertently changed its setting, but my photos of the Blue Diamond contestants are somewhat dark.  I did however, manage to get a few good photos of the eventual winner Pride of Dubai. It was not all that surprising that he won. He had the services of top jockey Damian Browne who rode Earthquake to victory in last year’s Blue Diamond Stakes and impressed with his run in the colts Blue Diamond Prelude only narrowly losing to Of The Brave.

Fontiton, the warm favourite, was disappointing, failing to fire in the finish. Subsequently it was revealed that she was slightly lame after the race with bone chips in her off front fetlock, and will be spelled until Spring. 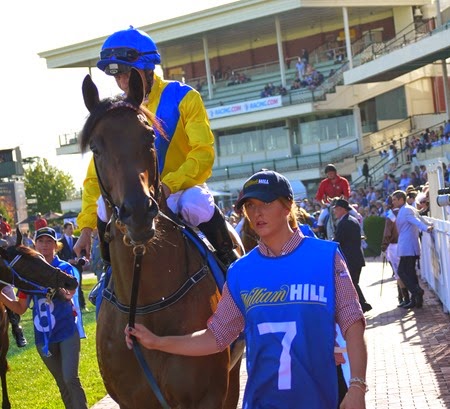 Pride of Dubai in the mounting yard

I headed for home after the Blue Diamond Stakes – it had been a long afternoon. I was disappointed with the results as far as my favourites were concerned, but at least public transport was trouble free this time.

And on Friday night at Moonee Valley, Sistonic had her colours lowered, failing to run a place in the Typhoon Tracy Stakes. She engaged in a speed battle with Eloping in the early stages of the race and ran out of steam in the straight. 100/1 shot Written Dash won the bikkies.

Next Saturday it’s back to Flemington for the Group 1 Australian Guineas. Through some bizarre programming, the Group 1 Randwick Guineas will be run on the same day, splitting the fields and no doubt weakening them as well.