A Musical Interlude–Kevin & Dustin Welch at the Caravan Music Club

What a pleasure it was to be back in the urban wilds of Oakleigh at the Caravan Music Club! It has to be one of the best music venues in Melbourne, so it’s a pity it is so far away from where I live.

However, last night, after taking up the offer of a ticket from our neighbour B, I got to attend a wonderful concert by US singer songwriters, father and son duo Kevin Welch and Dustin Welch.

Kevin Welch is no stranger to these shores having toured here many times with fellow Dead Reckoner Kieran Kane. I first saw them in November 1999 at the Continental Cafe and like everyone who was present on the night, was blown away by their performance.

This is Dustin Welch’s first tour of Australia but he has been making a name for himself in his home country as an accomplished multi instrumentalist and literate lyricist.

He and his dad make a dynamic duo, sharing a taste for the same type of music, as well as having a ‘chip off the old block ‘ similarity in voices and delivery.

The evening was kicked off by local singer songwriter Dan Waters, who performed a mesmerising set, mostly comprised of songs from his debut album La Vita E Bella. Typified by his dry as a dust bowl delivery that reminds me of James McMurtry, and others of Merle Haggard and Johnny Cash, his gritty urban ballads of low life and desperation grow on you as you listen to the words. Included in his set was the terrific Guilt And Shame, Didn’t Mean To Hurt No-One, and Heat of December.

There was a short break after Dan Waters’ set, after which the main act assumed the stage and played for something like two hours, taking turn about to sing songs from their dual repertoires with each providing vocal and instrumental accompaniment to the other.

The first song, sung by Kevin Welch was The Great Emancipation, one I had not heard before. In the main Kevin played mostly new songs, but there were several familiar tunes among them, such as Postcard From Mexico, Millionaire, Jersey Devil, Train To Birmingham and Marysville, a song he wrote in response to the Black Saturday bushfires of 2009. 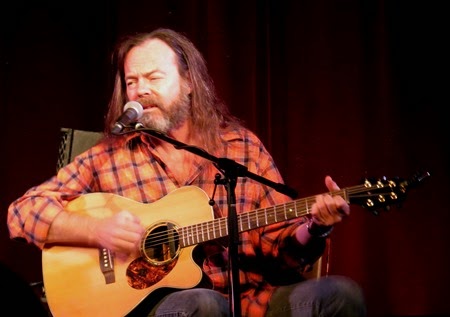 Kevin Welch – looking older than when I last saw him

Of course I’d never heard any of Dustin Welch’s songs, so they were all new to me.  I was particularly taken with Sparrows, Paranoid Heart Poor House, Cannonball Girl and Whisky Priest, a song inspired by the Graham Greene novel  The Power and the Glory. 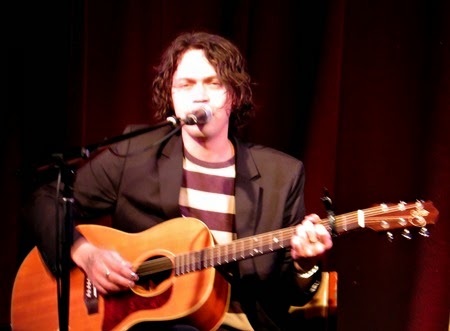 Just about every time I’ve seen Kevin Welch in concert, he has experienced problems with his guitar. This time a string broke, a brief way into the set, so he was obliged to borrow Dan Waters’ instrument which he played for the rest of the night.

Dustin had no trouble with his instruments – banjo, slide guitar and acoustic guitar. And he certainly knew how to play them.

It was a great show by two consummate showmen, one young, one old, the family relationship creating a marvellously engaging listening experience.

Here’s a video of Kevin & Dustin performing Postcard From Mexico

Too Old To Die Young

I’m anticipating several musical treats in the coming months. First up in April is the exhilarating Pokey La Farge, followed by the soulfully beautiful Iris Dement in May, whilst in June I have tickets for the Emmylou Harris and Rodney Crowell concert at the Palais which promises to be a ripper.