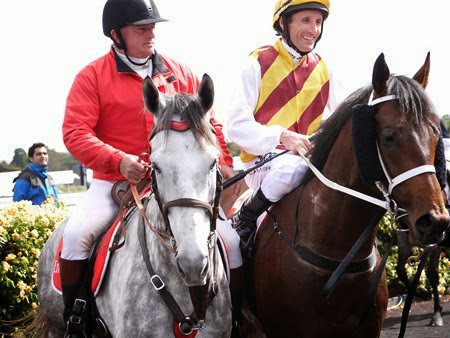 Weatherwise, no two days could have been less alike.

On Derby Day it was cold and windy with occasional showers, and on Cup Day it was hot and sunny in the main.

One good thing about the weather on Derby Day was that it discouraged the party crowd from filling the public lawn with their blankets, and even reduced crowd numbers from the year before.

So Derby Day was that much more enjoyable, with getting a drink, finding a good spot to watch the races, or placing a bet, being easy.

I arrived fairly early at Flemington racecourse, in plenty of time to watch the first Group 1 race, it being the Coolmore Stud Stakes.

It was won by the very handsome Brazen Beau, from outsider Delectation with Kuro running third. The favourite Rich Enuff must have had enough after his gruelling battle with Shooting To Win in the Caulfield Guineas, as he finished well back in 7th place. And Earthquake and Rubick wore themselves out with a speed competition on the inside and also finished well back. 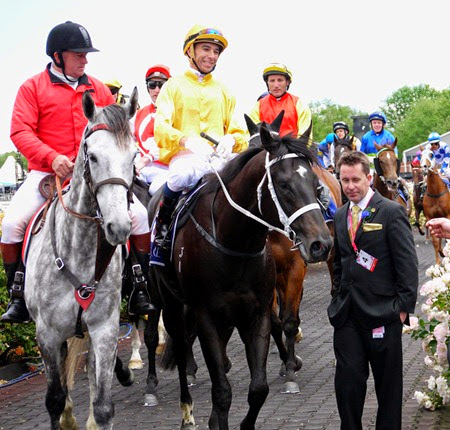 Next up was the Lexus Stakes where Signoff earned himself a place in the Melbourne Cup field, beating home Big Memory and La Amistad. 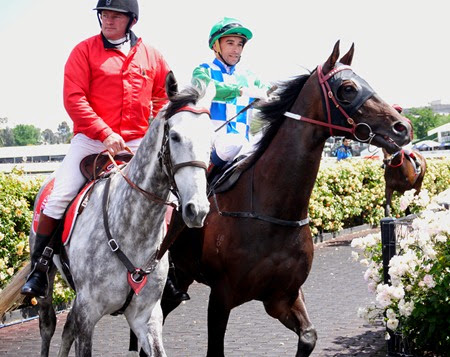 Signoff returns to scale after winning the Lexus Stakes

The second of the Group 1 races the Mackinnon Stakes followed 40 minutes later and Happy Trails finally got his day of glory for this spring with the narrowest of victories over He’s Your Man.  English horse Farraaj ran third. 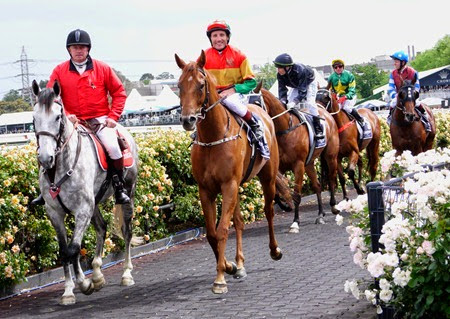 Happy Trails leads the field back to scale after being declared the winner of the Mackinnon Stakes.

The Derby as usual resulted in the favourite being nowhere in the finish. Hampton Court obviously didn’t have the staying power to run the distance and finished eighth.  Chris Waller won yet another Group 1 race with his runner Preferment, who certainly could run the distance, beating home Bondeiger and Nozomi by a short margin. 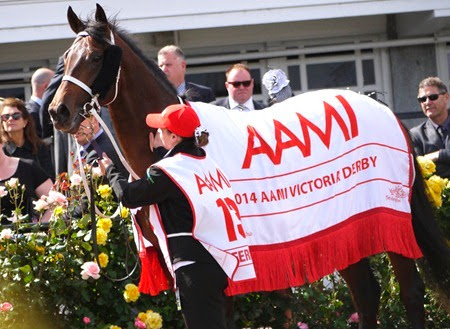 Preferment in the winner’s rug posing for the cameras.

By this time it was about 4.00pm and there were still two races to go. the final Group 1, the Myer Classic and the tab.com.au Stakes.

My money was on Sweet Idea in the Myer Classic, but she was beaten into second place by longshot, but talented, mare Bonaria, who appreciated the sting out of the ground (due to the rain). Catkins, reliable as always, ran third. 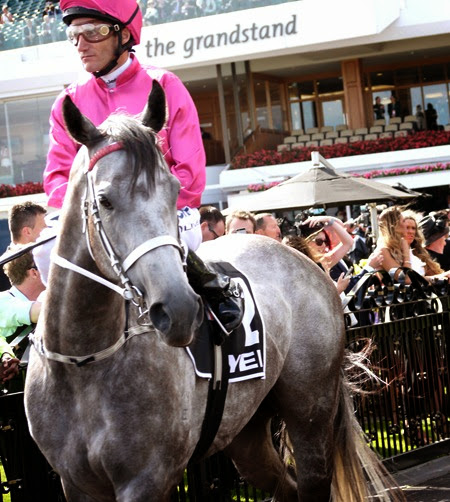 Catkins on her way to the track 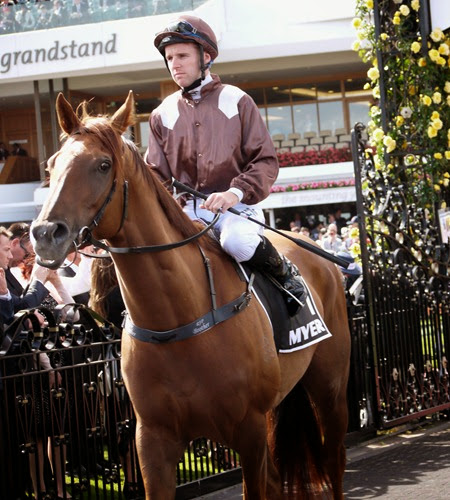 Sweet Idea leaving the mounting yard for the track 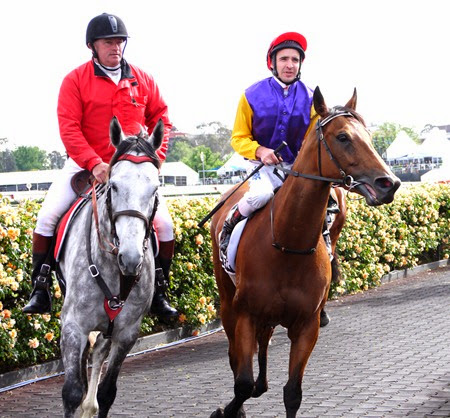 Bonaria returns to scale after winning the Myer Classic

The last race on the program was worth staying for to witness up and coming, unbeaten sprinter, Deep Field, win his 5th race in succession.

I took a number of photos of him… 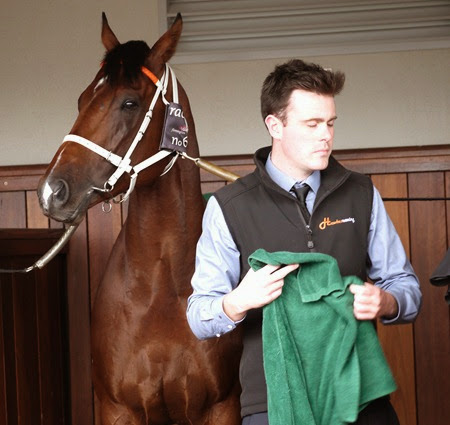 Deep Field in his stall earlier in the afternoon 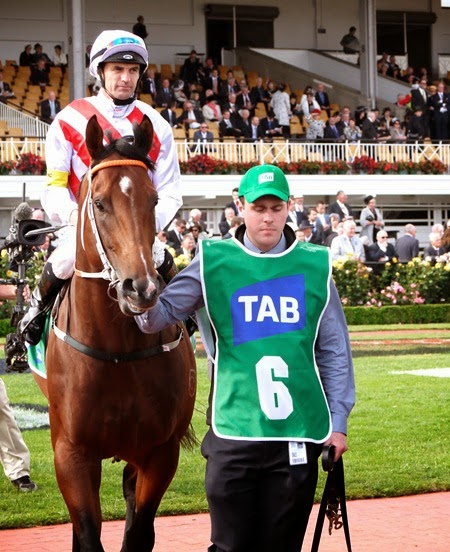 Deep Field in the mounting yard 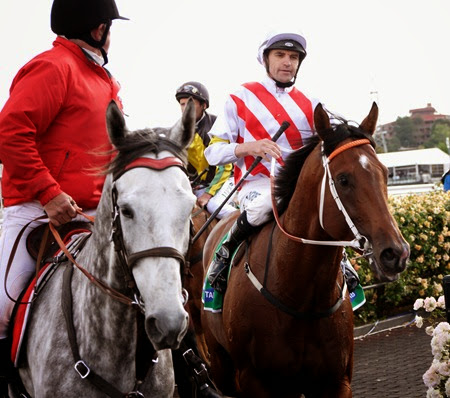 Deep Field returns to scale after winning the tab.com.au Stakes

Deep Field won by a length from Driefontein and In Cahoots

As previously mentioned Melbourne Cup day was hot and sunny, so the annual race goers were out in force at Flemington yesterday. I made it to the course, on a mostly empty train at about 2.00 pm, one hour before the big event. I therefore had plenty of time to make my way through the hordes of partying patrons, spread out all over the grass, to my usual possie on the fence next to the path where the horses leave the mounting yard. As there are sliding  gates there one can just stand around and get front fence positioning when the gates are closed.

Once in position I stayed put and luckily arrived at the right moment, as the security guys closed the gates shortly afterwards, and kept them closed until after the Melbourne Cup was run.

There wasn’t long to wait for the main event, and in the meanwhile you were entertained by the pre-race pomp and circumstance, such as the ceremonial handing over of the 2014 Gold Cup by last year’s winning trainer, i.e Gai Waterhouse. She paused just in front of me on her way to the mounting yard and saluted the crowd with said Cup. 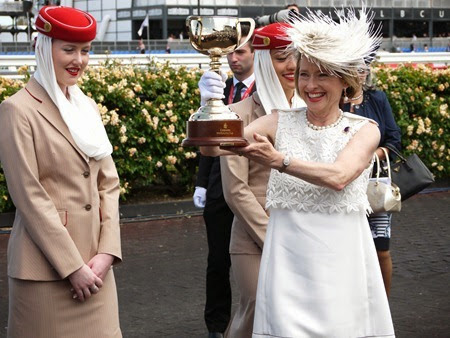 Then there was a choir who sang Heroes Live Forever, then the National Anthem.

It’s rather ironic that the first song can’t apply to Admire Rakti and Araldo who tragically lost their lives yesterday, casting a sombre light over the day, though no doubt memories of their sad passing will linger for many years.

I am therefore glad that I managed to photograph both of them as they made their way to track.  Admire Rakti, other than being agitated by the crowds and noise, gives no indication that he is suffering a heart condition. How would you know anyway? 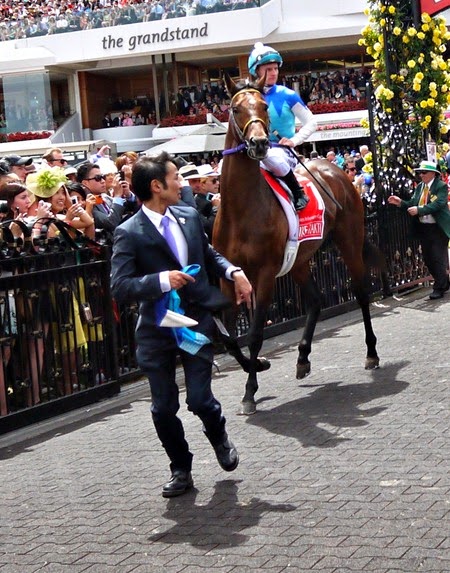 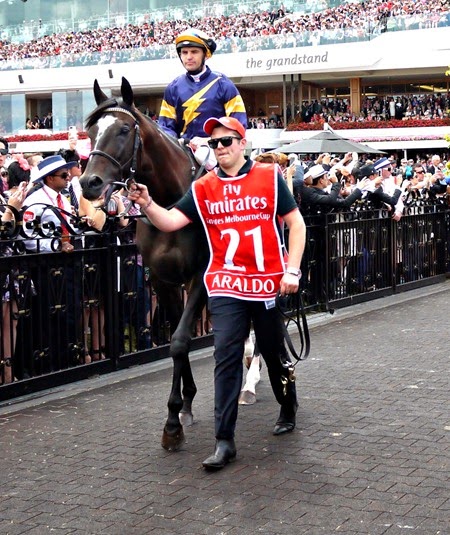 As mentioned before the place was packed, but I must admit it did add to the atmosphere of excited expectation as the horses paraded in the mounting yard, then made their way to the track. 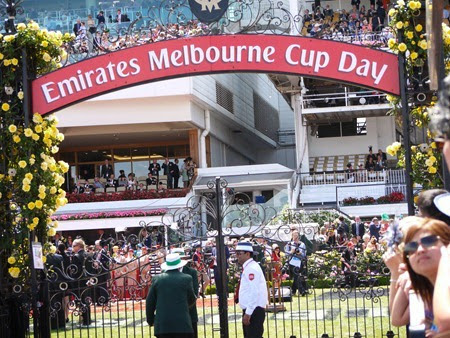 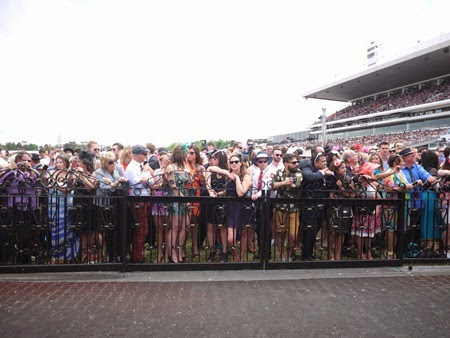 The crowd opposite where I was standing 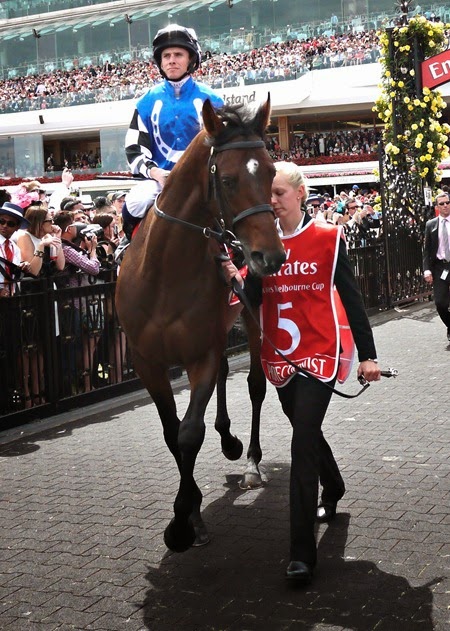 The winner Protectionist on his way to the track 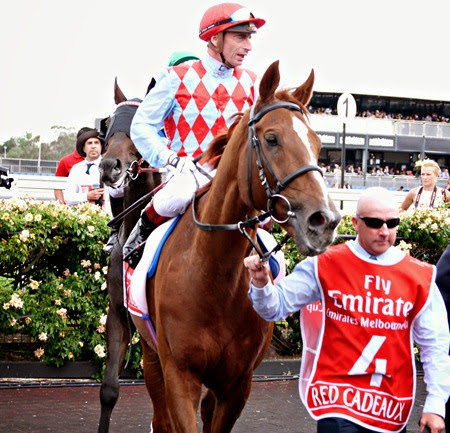 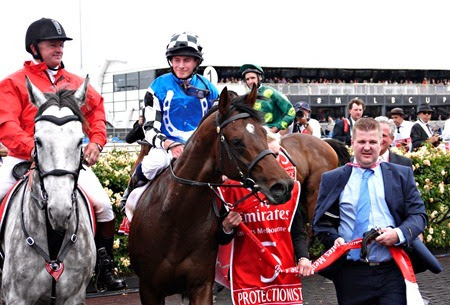 Protectionist returns to scale after his victory in the Melbourne Cup

Having not attended the Melbourne Cup for 43 years, it was quite a change being there in person rather than watching the race on TV.  I didn’t find out about Admire Rakti’s death until I got home, so left the course in good spirits after the Melbourne Cup and waited for the next train on a crowded platform.

Would I attend it again? Quite possibly, now that I know the worst about the crowds. Actually I didn’t witness any loutish behaviour while I was there, and the people standing near me on the fence were all pleasant and friendly.

I didn’t even attempt to place a place a bet at Flemington, but used my online betting account with Sportsbet to have each way bets on Admire Rakti, Fawkner, Lucia Valentina and Who Shot Thebarman.  Fortunately Who Shot Thebarman ran third and paid a reasonable dividend for the place, so I got back half of what I had expended on the race.

I could have written at greater length on my day at the Derby and Melbourne Cup, but time constraints have forced me to keep it short.

As I type, I have only an hour or two to have dinner and get to Rod Laver Arena for the Rolling Stones concert.