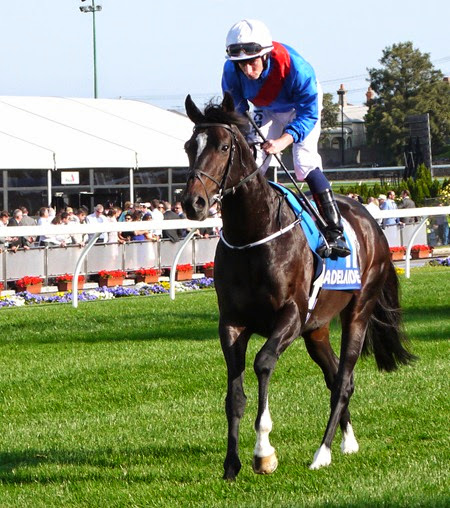 Though technically only three (his birth date is 19/2/11) Irish colt Adelaide blitzed the Cox Plate field with an astounding run from last position. Starting his move at the 800 metre mark, he raced down the extreme outside to overtake the leaders in the straight and win by a short margin from Fawkner and Silent Achiever, part of a wall of horses hitting the line together.

Just after the corner into the straight – The Cleaner is slightly ahead of Fawkner – Adelaide is on the extreme outside just about to pass Silent Achiever & Side Glance (on her inside).

Another wall of horses finish featured in the other Group 1 race over the weekend.

Lankan Rupee finally quashed his Moonee Valley hoodoo and returned to the winner’s circle with a bold front running win in the Manikato Stakes.  It was another exciting photo finish with little separating the first eight runners who crossed the line, strung out across the track.  Angelic Light grabbed second and outsider Famous Seamus was awarded third place.

I’ve been rather jumping the gun, describing the Cox Plate finish…

When I arrived at the track at about 2.30 pm it was just after Race 3 the Group 2 Drummond Golf Fillies Classic. It was won by Lumosty who outclassed the rest of the field winning by 2 lengths from Tahni Dancer and Berimbau.

As there was plenty of time before Race 4, and as is my usual habit, I wandered out to the stalls area to see who had already arrived. I came across The Cleaner in his stall, with a small crowd of people gathered around. 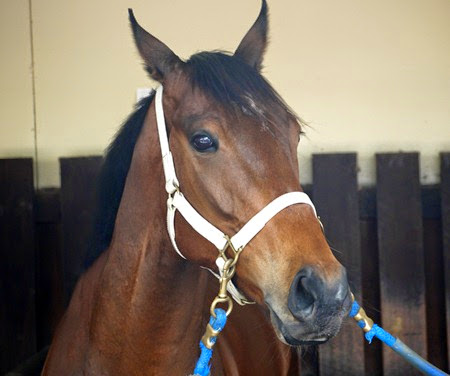 A nice head shot of The Cleaner in his stall 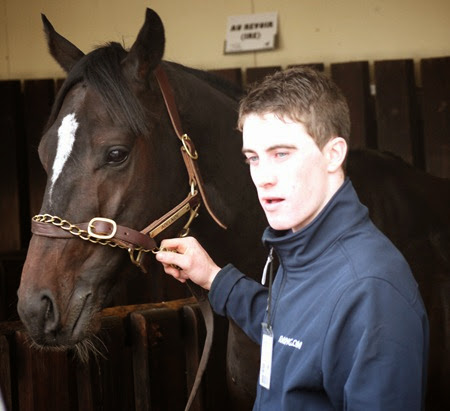 Adelaide in his stall

Next door to him was Au Revoir… 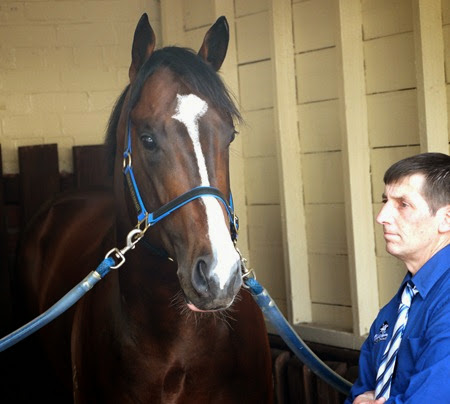 …and Guest of Honour 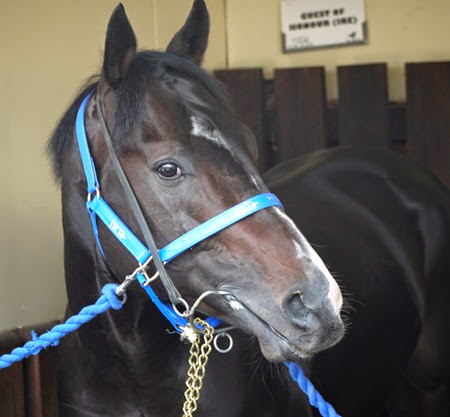 It was great to see the 2008 Cox Plate winner Maldivian in attendance, primarily to lead out the Cox Plate field. I managed to get a lovely head shot of him in the stalls area. 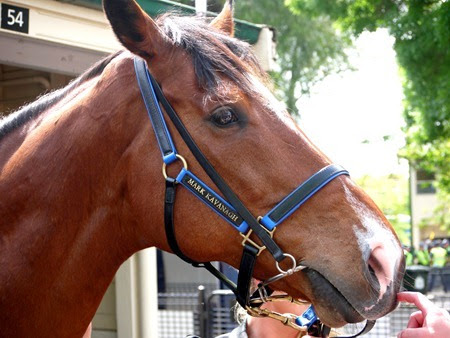 The field for Race 4 , the Group 3 Telstra Phonewords Stakes was filing out to the track as I left the stalls area, so I headed to the public lawn at the top end of the straight and easily found a position on the fence to watch the race. 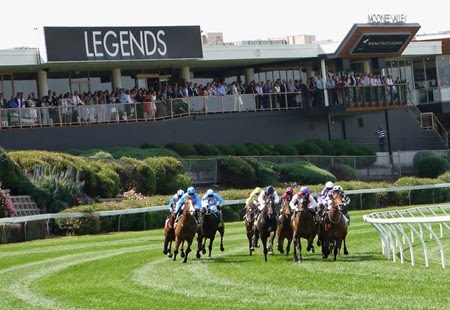 Race 4 – the corner into the straight, Legends in the background with patrons crowded onto the balconies.

The race was won by the favourite Galaxy Pegasus with Law and Nicoscene filling the minor places. I didn’t have any money on the outcome, feeling disinclined to bet on the race.

Race 5 was the Moonee Valley Gold Cup, a Group 2 race for stayers over 2500 metres. Precedence was my selection as he’d won the race last year and also in 2010. It was a rough race where a big kerfuffle occurred on the corner as they turned into the straight for the second time. A gasp arose from those near where I was standing, as Chad Schofield was thrown from Albonetti after she had clipped heels with another horse. Winning jockey Michelle Payne was suspended for 20 meetings as a result of the incident.  Prince of Penzance was the winner, with Le Roi running second and Au Revoir third. Precedence was galloped on, which stymied his chances. Chad Schofield was well enough to ride his two other commitments of the meeting, and Albonetti was unhurt and galloped riderless to the post. 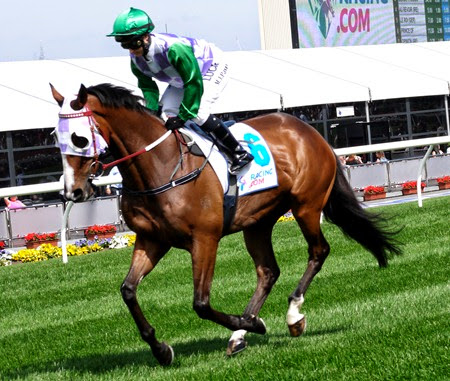 Prince of Penzance on his way to the barriers.

Down the straight in the Moonee Valley Cup – Au Revoir leads at this point with Le Roi in second place and Prince of Penzance about to overtake them.

It was relatively uncrowded at the top end of the public lawn and the surrounding people were a cheery friendly bunch.

A young spiv exclaimed that he’d never seen a horse close up. We made room for him on the fence and tipped him when the horses were about to thunder past. He was wearing an extraordinary watch; a steam punk monster which he said he bought in America. I took a photograph of it ... 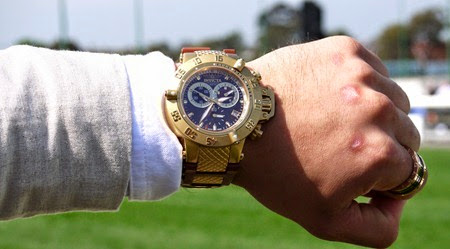 My first and only winner of the day was Hooked in the Crystal Mile. As we are now in the sign of Scorpio his name struck me as quite appropriate for the Astrological season, but he did have good form on his side as well. 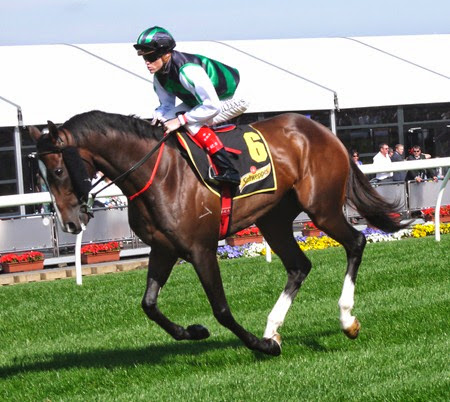 Hooked on his way to the gates.

He won by 1¾ lengths from Bull Point and Desert Jeuney.

Up the straight in the Crystal Mile, Hooked leads by several lengths

There was still 1½ hours to go before the main event, and I will admit time was starting to drag, so I decided to grab a beer and sit for a while and study the form for the 7th race, the Dilmah Exceptional Teas Vase (it used to be called the Aimee Vase). It’s a Group 2 for three year olds run over the same distance as the Cox Plate (2040 metres).

My selection was Atmosphere so I backed him for a win only. He ran second to Moonovermanhattan who I admit I didn’t fancy as I’ve seen him race several times before where he was unsuccessful. 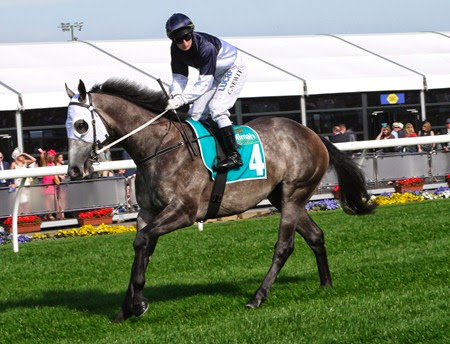 The top of the straight in the Vase – Moonovermanhattan leads with Zululand behind him on the inside, Atmosphere (in pink silks & red cap) is running third.

There are those who say the Cox Plate should be run at Flemington, but to my my mind it wouldn’t be the same race. What makes it so special is that it is run on the tight circuit of Moonee Valley, where the atmosphere is electric with anticipation as in an ancient Roman theatre. You have to be there to experience the palpable excitement of the crowd as the race start draws near.

There was plenty of time in hand after the Vase so I returned to the stalls area and came across The Cleaner again, being kitted out for the race. His trainer Mick Burles obligingly posed with his mate “Bill” before leading him out of his stall, so I could get this photo. 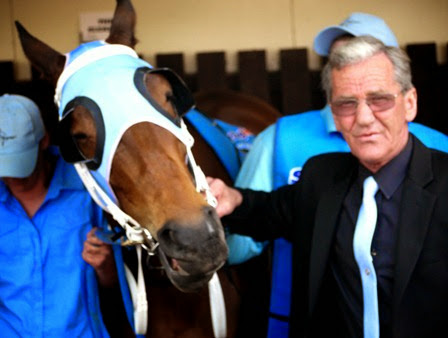 The Cleaner aka Bill with trainer Mick Burles

After that I lingered near the parade ring to see the Cox Plate contestants walk around before going to the mounting yard. 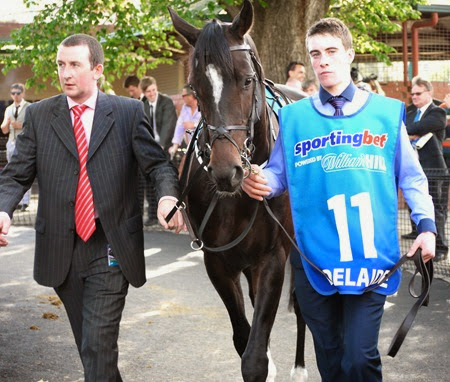 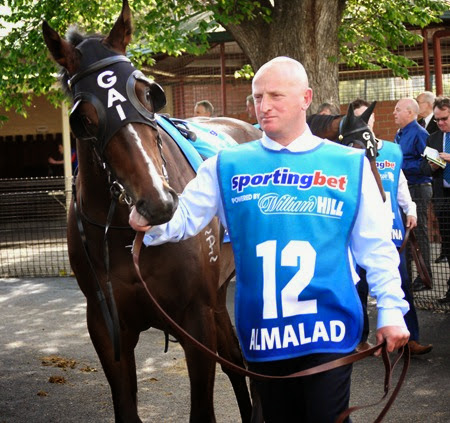 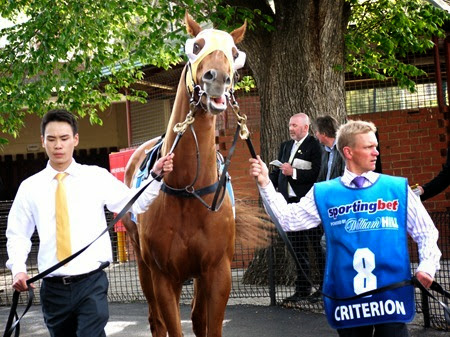 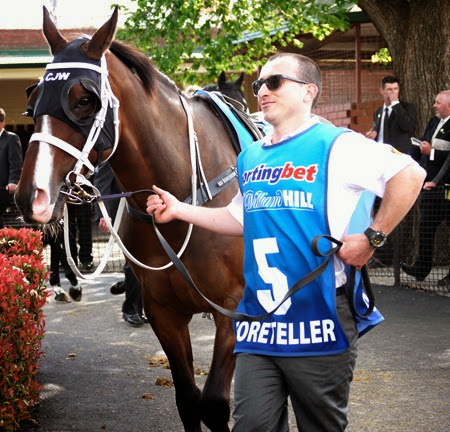 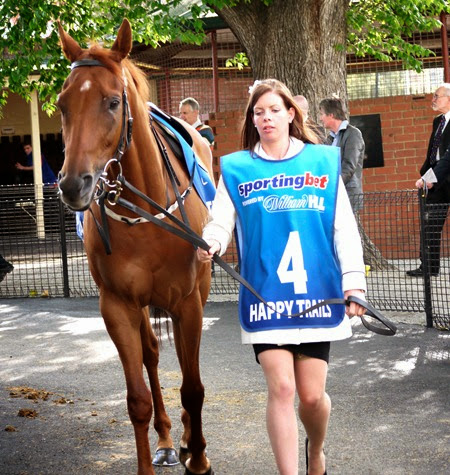 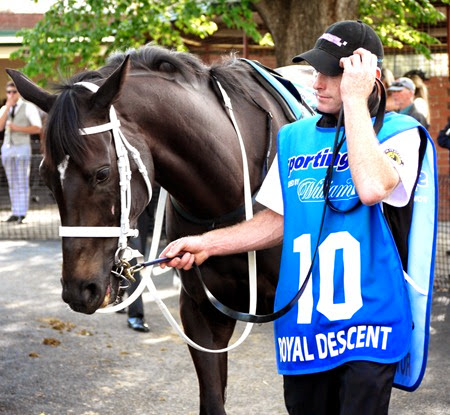 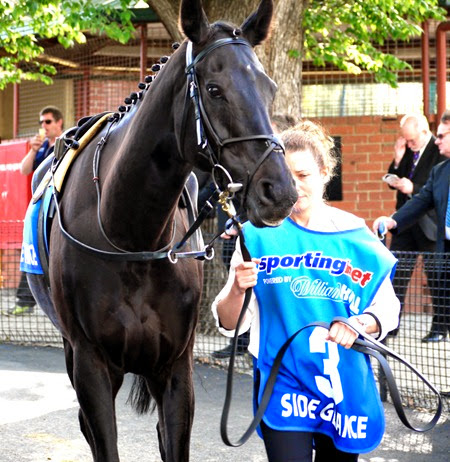 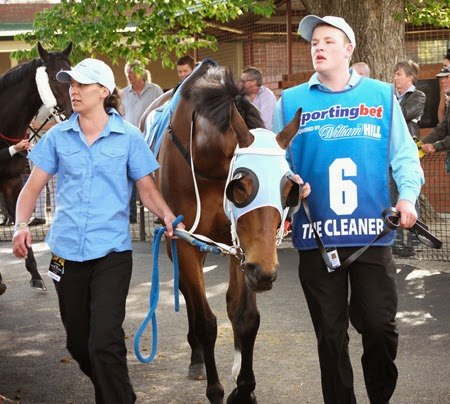 Not all the horses had emerged during the time I was near the parade ring, but I didn’t wait for them, as the time for the Cox Plate was drawing near, so I made my way back to the fence at the top of the public lawn, and photographed some of the others as they made their way to the starting gates. 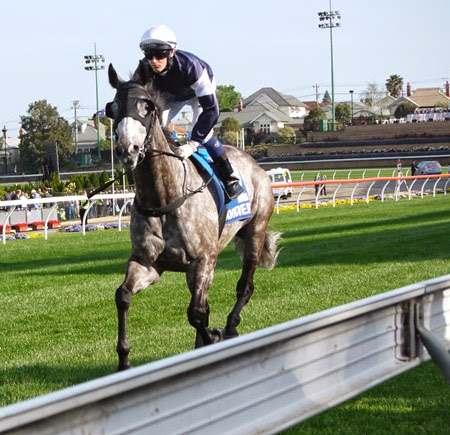 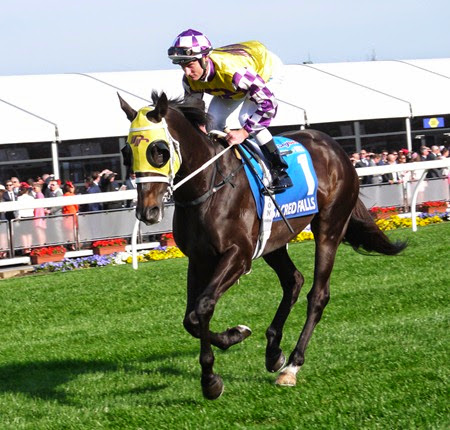 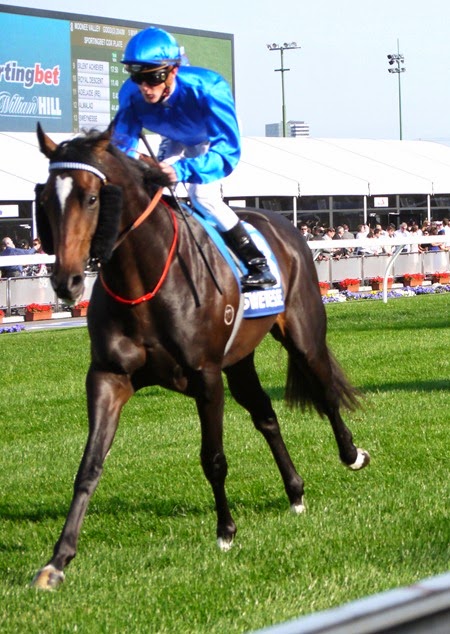 I’ve described how the Cox Plate finished earlier in this post, but I have not mentioned the start.

The Cleaner had the outside barrier (14) and had to work hard to get to the lead which he eventually did,  just after passing the winning post for the first time. This may have been his downfall, but that’s his style of racing. The fairy tale ending was not to be, but The Cleaner led the field at a good clip until half way up straight, where he was overtaken first by Fawkner, then half of the rest the field, but he didn’t give up even then, striving hard to finish 9th, three and half lengths from the winner. With a better barrier, he would undoubtedly have finished closer. Anyway he made the race an honest competition of pace and stamina and set it up for Adelaide.

Adelaide is certainly something special, to come from Ireland after  racing in America in August, to win the Cox Plate in such a remarkable fashion. I suppose one should feel privileged to have witnessed the event. Fawkner and Silent Achiever did the locals proud, narrow runners up to an exceptional talent.

A young woman standing close to me was over the moon with his win, as she’d backed him; no doubt because of his name and the associations it had for her.  As good a way to pick a winner as any.

I had a win bet on Fawkner, so no collect for me, so I headed for the bus stop and home, after another great day at the races in splendid sunshine, a cool breeze keeping it pleasant and balmy.

Next weekend is super Saturday at Flemington with four Group 1 races on the program, the feature being the Victoria Derby. It’s going to be a busy week following that, with the Melbourne Cup on Tuesday, the Rolling Stones on Wednesday night, the Crown Oaks on Thursday and the Emirates Stakes meeting on Saturday. I’m undecided if I’ll go to all the races; it depends on how I feel after the Stones concert. I may give the Oaks a miss, but will definitely attend the Emirates, where the Darley Classic Sprint looks like an must see  race with Lankan Rupee up against new emerging sprint sensation Chautauqua.