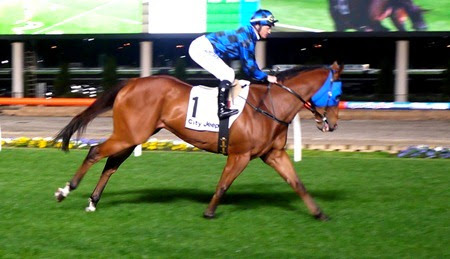 I decided, after all, to go to the Moonee Valley meeting and as expected photographs from my camera were not all that flash. Well, I never use the flash, so I rely on the light that is available at the time of the shot. You’d think that Moonee Valley, lit up as it is like a lighthouse that you can see for miles, would give enough light to produce a sharp shot on a non professional camera. Alas that is not so, as I only managed to salvage 5% of the photographs I snapped, and they’re not that good.

Despite the appalling conditions for photography, it was an enjoyable meeting, the highlight being the gutsy win of The Cleaner in the JRA Cup.

I got to Moonee Valley with plenty of time to get a good position on the fence to watch Race 2, the Group 2 Stocks Stakes. I had made a resolution not to bet last night, but I couldn’t resist throwing a few dollars each way on Dear Demi as she was at reasonable odds of 4/1 and I thought she had a very good chance of winning.

Commanding Jewel started as hot favourite, but was outsprinted in the straight by Solicit and Dear Demi who hit the line together, with Dear Demi getting the nod. Despite being disappointed that Commanding Jewel didn’t win, I was pleased that my first wager of the night was a winning one. After last week’s disastrous losses, it was gratifying to discover that my luck had changed for the better. 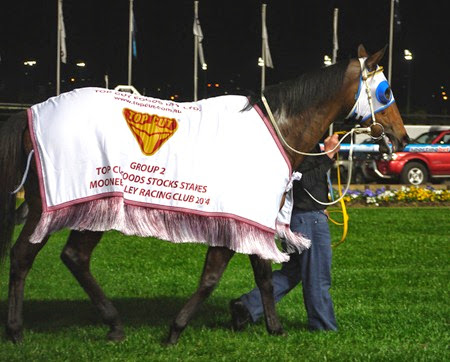 The third race was a dash over 955 metres and I selected last year’s winner Vatican as my wager, but he finished last.  So much for luck!

I didn’t have a bet on the feature race, the Moir Stakes which was up next as my pick would have been Lankan Rupee and his odds were too short to bother with. He ended up being beaten again. Ridden more conservatively this time, Buffering was allowed to lead the whole way, and Lankan Rupee couldn’t quite catch up with him in the straight. Rebel Dane ran third. This was Buffering’s second victory in this race. He also won in 2012. Perhaps the next time Lankan Rupee starts, his odds will be more tempting.

There was a bandstand  set up on the public lawn, but the musicians only took the stage just before the Moir Stakes to sing one song. I’m still wondering what the point of that was.

Band on the public lawn

The races were scheduled at 30 minute intervals, so it wasn’t a long wait to the fifth race, the Champagne Stakes. My fancy was Tawteen over Eloping, but the latter certainly proved she was a cut above her rivals with a scintillating win after leading through most of the race. Tawteen ended up in third spot, with Tahni Dancer filling second place.

Eloping returns to scale after winning the Champagne Stakes

As The Cleaner did not start as favourite in the JRA Cup, his odds were a tempting $4.00 so I backed him for a win only.

As the JRA Cup is run over the Cox Plate distance (2040 metres), the starting gates are set up at the top of the straight, so I decided to go up to that end of the lawn and try and get a photo of the start of the race.  It actually didn’t turn out too bad.

As expected The Cleaner assumed the lead shortly after the start and was still comfortably leading as the field ran down the straight to the finish line.  A big cheer erupted when the The Cleaner held on to win narrowly from Sangster and Mourinho. He was clapped back to scale by his enthusiastic supporters. One guy informed me excitedly he had only come to races that night to see The Cleaner in action.

JRA Cup down the straight – The Cleaner leads by a length or so.

Moonee Valley were offering half price schooners if  The Cleaner was successful. He was a better certainty than Lankan Rupee a fortnight ago, so no doubt those in party mode still left after the race took advantage of the promotion

I did not stay around for a half price schooner, as the last bus that goes closest to my home was due to depart in twenty minutes. After collecting my winnings on The Cleaner I headed for the bus stop and home, pleased that my luck on the punt had returned, and hyped from witnessing a great evening of first class racing.