What Did We Do Without Them? - Continued 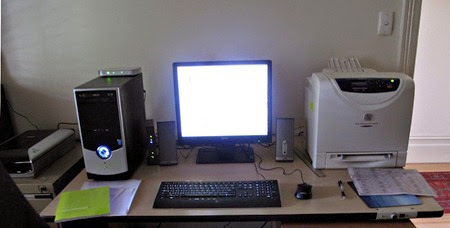 It’s more the question of are they worth the trouble?

It took me all last week to successfully set up my new computer, and I wonder if the stress and distraction was worth it.  The main problem was installing the printer, which being over five years of age required a Windows 7 driver. That was OK as it was easy to find on the Fuji Xerox site, but could I get the printer to install it properly? No.

After putting the printer problem in the too hard basket for most of the week, I somehow or other managed to successfully install the driver on Friday. Don’t ask me how I did it, but after detaching the printer from the computer, then reattaching it, Windows automatically found the printer driver and installed it and the printer worked.  What a relief!

In the meantime I installed my most useful software, MS Office, Dreamweaver, Cute FTP for example and even though the software in most cases is over ten years old they all work in Windows 7. Even some really ancient Windows 3.1 games work in the OS.

The only problematic application was Dreamweaver 4, which worked, but had a major problem that could not be surmounted easily. I then remembered that I had a later version of Dreamweaver which I had purchased in 2004, so installed that and it worked fine. It is however a slightly more sophisticated program which had me on a swift learning curve  when I used it to  edit web pages today. I had grown so used to the layout of Dreamweaver 4, that I’d stuck with it through the years, so had hardly tried Dreamweaver MX 2004 as it looked different and required time to grow accustomed to the interface, so I basically stuck with the tried and true and familiar as I knew it in Dreamweaver 4.

It’s amazing how fast you can learn when you have to. Having worked out Dreamweaver MX  today, I’ve decided that actually it isn’t that bad a program, and has some pleasing improvements that I’d  never noticed before, like retaining the formatting of Word documents copied into it and automatically inserting links.

So setting up the new computer has been unusually educational if frustrating at times.

As for Windows 7, it’s actually pretty similar to XP and certainly not as bossy as Vista, so I have no issues with it at all.

You will notice in the picture above that the racing form guide is sitting in front of the printer.  I was too distracted last week to preview the first of Randwick’s “Championship” meetings, which featured the Group One Sires, ATC Derby, T J Smith and the hallowed mile of the Doncaster Handicap.  They were run  on a bog track (Heavy 9) and the winners were a mix of class and specialist mudrunners.

The Sires was won by smart filly Peggy Jean,  Criterion added the Derby to his Rosehill Guineas victory, Lankan Rupee demonstrated just how brilliant he is with a stunning two length win in the T J Smith, and Sacred Falls won the Doncaster for the second year  in succession.